Arguing the merits of 300 as a film probably serves little purpose at this point.  Once we come out with the bigger, better Blu-Ray release for a film, we’ve got a pretty good idea where we are.  We also know that we may have made a few Zack Snyder converts with the release of Watchmen. 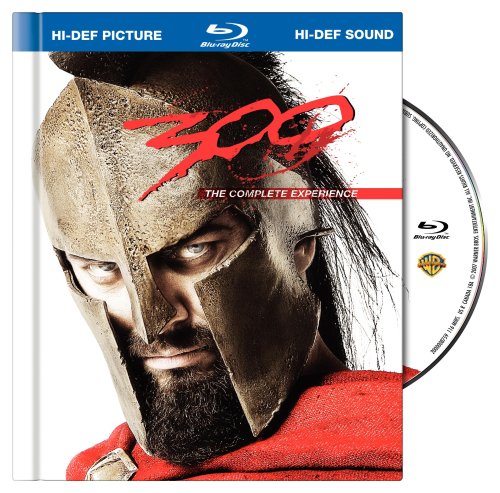 Some people loved 300, some couldn’t stand it, and some could at least see through it enough to become intrigued by the idea of the graphic novel on which it is based.  Whatever camp you might fall into on the film’s own merits, what is rather undeniable is that this is an impressive Blu-Ray release.  If we’re lucky, it will serve as a guide for future treatments from all walks of film.

The bonuses put together in the release really are just too numerous to mention (butI’ll include a list below), but the main attraction is the interactive explorations you can enjoy during the film.  There are three unique possibilities you can choose from as you start the film: Creating a Legend, Bringing the Legend to Life, and The History Behind the Myth.

Each of these options gives you a surprising amount of coverage, and several choices depending on how much you’re looking to explore during your current run through the film, and what you’re given runs alongside the film.

Creating a Legend basically covers Frank Miller‘s theory and effort in terms of transforming history into a graphic novel.  Bringing the Legend to Life runs through a wide assortment of tasks and challenges from the technical side of getting from page to screen.  The History Behind the Myth looks at the historical facts as known and gives surprising detail on how and where the film does and doesn’t diverge from the true story.

Each of these give you a surprising number of points from which you access the additions, and it makes for nearly incalculable possibilities.  From small bits of trivia or anecdotes, to interview footage, to near stand alone featurettes, these interactive points of exploration offer the potential for an amazing viewing experience.  Honestly, the focus on history choice is a worthwhile feature even for those with little interest in the film itself at all.

You also get another side-by-side feature, Bluescreen Picture-in-Picture, which has Zack Snyder joining you on your ride through the film as he compares the Bluescreen composite to the final result.  It’s quite interesting, and while it plays up the creation of the special effects, it also lets you into Snyder’s theory of film to a great degree.  Adding to this, there is also an audio commentary track by Snyder which plays out in a more traditional commentary sense, and is quite well done.

The Blu-Ray is also geared up to take advantage of BD Live, which in this case will get you a Media Center with exclusive content, the ability to partake of Live Community Screenings so you can watch with others (and invite your friends through Facebook), and My WB Commentary which lets you record your own picture-in-picture commentary over the film, and share it.

As I said, the features are just too numerous to go into detail on all of them.  It’s an amazing package, and a must-own for fans of the film.  A lot of these features, especially those that focus on the history, were really solid efforts, and the fact that many of them are in HD is a serious bonus.  This is truly a great example of how to combine many aspects of the film process, behind-the-scenes efforts, and points of fan interest into a brilliant showcase.  Below find a full list of special features, and several video clips.

Own it on Blu-Ray Today!