Something about the wild pizza-lovers seems to keep the younger crowds coming back for more (as I suppose 25 years proves), and the A-Team-esque brand of flashy, but no one gets hurt, violence makes these features action-packed, but safely PG.

A new generation is learning to throw out surfer slang and relentlessly karate chop anything that comes near with the animated series, Teenage Mutant Ninja Turtles: Back to the Sewer which airs on The CW on Saturday mornings.  The unique style of the heroes in a half-shell, and the combination of personalities, mischievousness, and martial arts mayhem is winning over plenty of new fans. 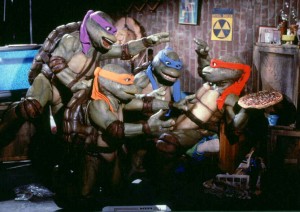 The DVDs themselves are not loaded with special features, apart from the TMNT disc.  The first three films have a few goodies: The T Files, which is a collection of character bios, trailers, a few games, and DVD-ROM features, but these are not full-blown retreatments.  TMNT comes with quite an assortment of extras.  A commentary track by writer/director Kevin Munroe.  Alternate Opening and Alternate Ending, along with other deleted scenes.  Side-by-side comparison of storyboards and CGI action.  Plus, interviews with voice talents: Patrick Stewart, Sarah Michelle Gellar, Laurence Fishburne, and the filmmakers. 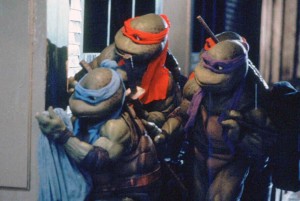 It’s a good time for a collection, and these are nicely put together sets.  Just to give you an idea that this is really a nice effort, the collectible tin carrying-case is really a quality piece, very much in line with what you might buy as travel disc storage, and holds up to 20 discs.

Own it on DVD and Blu-Ray August 11th!

In case you’re out of the loop, here are quick synopses of the individual titles from the press release.

After exposure to strange. glowing, green ooze, four teenage turtles–Michelangelo, Raphael, Leonardo, and Donatello–have mutated into ninjas and have begun living in the sewers of a large city. Under the guidance of father-figure and ninja master Splinter the Rat and television reporter April O’Neil, the Turtles embark on a mission to run crime out of the city and defeat the warlord Shredder.

The evil Shredder believes he’s found what gives the Turtles their power and proceeds to create dangerous mutants. Armed with Professor Perry’s anti-mutant antidote, it’s up to the crime-fighting Turtles and a pizza delivery boy to conquer these mutants.

Everybody’s favorite giant Turtles travel through time and space to feudal Japan to rescue their plucky sidekick April when a golden sceptre accidentally causes her to switch places with a rebellious samurai.

Strange events are occurring in New York City, and the Turtles are needed more than ever, but Raphael, Donatello, and Michelangelo have become lost and directionless. With the city in peril, it’s up to Leonardo and Zen Master Splinter to restore unity and ninja discipline to the Turtles.

Lifetime has a big premiere coming your way this Sunday, and Jennifer Love Hewitt was available recently to talk about The Client List. Lifetime’s...
Read more
Newsline