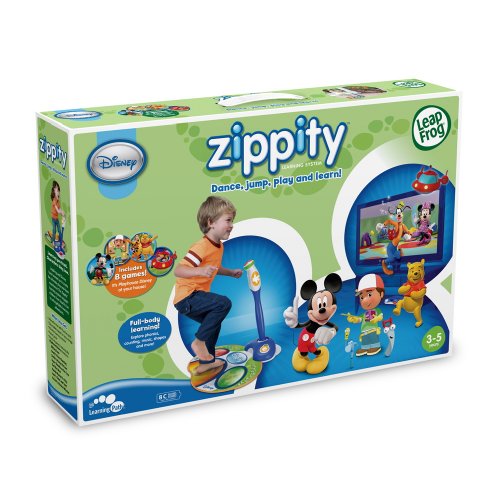 I’m actually a huge fan of LeapFrog, and endorsing their products is something that’s pretty easy for me. My house has LeapPads (yes, more than one), a Leapster, a Didj, and countless books and cartridges. Simply put, there are a lot of things about the way LeapFrog tries to make their products work that gels with my theories on learning, and for what it’s worth, I have a degree in Secondary Education. But, when it comes to the Zippity, I’m a bit out of my element in the age-range, and I’m inherently suspicious of the general idea.

Much to the chagrin of many people, not least those at LeapFrog, this is the kind of thing I wanted to get a couple months experience with before I had an opinion.

The main stumbling block is that this is sold as being for ages 3-5. That’s a tough sell right there, because I’m not sure I’m all for a video system at the ripe old age of three, and even moving past that, I wonder about the attention span for something that is not exactly cheap. I have a little girl just at that opening age, and she loves a lot of things, especially when The Little Einsteins and so on are involved, but she loves many of them for about fifteen seconds.

The Zippity plugs into your television, and is a “game system” that your child controls using a large mat with an oversized joystick. The action is controlled by either moving the joystick or stepping on a colored space. The included games feature Mickey Mouse Clubhouse, Handy Manny, The Little Einsteins, and My Friends Tigger & Pooh. I should note that this is an exclusively LeapFrog and Disney collaboration. There are expansion cartridges with Cars and Disney Princesses, and others, but you’re going to be stuck with Disney titles.

The games focus on learning colors, numbers, memory skills, etc., and each show features two games with two levels of difficulty. Your child steps on the correct color to answer questions, or just to make the characters dance around. In one of The Little Einsteins‘ games, the joystick is used to get Rocket to collect musical instruments. You get the idea.

Well, I’ve had this thing for a few months now, and my daughter loves it. She jumps around like a maniac, and laughs hysterically. There’s dancing, hopping, pushing, and pulling, and she loves the characters. It took her quite a while to figure out what she was supposed to be doing, and she needed some guidance, but she was just barely three when it first arrived. She tries to sing along and talks to the screen, and has a lot of fun. She seems to have also latched onto the idea that now she has a “game,” because her brother is allowed to play with his Didj and on the Wii, so there’s a lot of, “My game is called Zippity!”

Months into the experiment, she hasn’t grown tired of it, though she doesn’t get to use it too regularly, because the very idea still makes me just a bit uncomfortable, but she has tons of fun with it.

I like the games as well, because the learning involved seems solid. The different levels for the games seem to add to the difficulty in a meaningful way, though she isn’t really up to the challenge. I also find it nice that the different shows are put together with very different games, and it’s clear that my daughter knows that one set of characters is colors, for example, while others are different types of games.

I also like that there are expansions, but I’m slightly nervous that there won’t be many more. As of now, I believe there are only three, and two of them are pretty girl-oriented, and for the money required I can see where people may want a bit more choice.

The fun factor clearly passes the test, and I believe the educational value does as well. The only thing left is the quality, and my daughter has tried her best to beat this thing to a pulp for months now, and you’d never know it. There is no such thing as moving the joystick a bit to the left for her, there is only ram it one way or the other with all her might, and the thing has held up fine. She has also jumped on the pad for all she’s worth, and it doesn’t seem at all the worse for it.

I definitely give this one a recommendation to any who might be interested. With all the possibilities out there, this one is perhaps a bit pricey, but I find it to be a solid product. I have always been pretty firmly of the belief that if there is learning to be done, there’s no reason it can’t be done while laughing hysterically, and the Zippity fits that bill.

I’d love to have a video here, since LeapFrog has many of them for the product, but they don’t seem interested in making that an easy task. You can check out some video of the product at their homepage here though.

In the interest of full disclosure, I will mention that LeapFrog sent me one of these to try out.