An unfortunate, recent loss, Legend of the Seeker only made it through two seasons, and the DVD release of the second and final season is now available. Based on the popular Sword of Truth series by Terry Goodkind, and starring Craig Horner, Bridget Regan, and Bruce Spence, the show seemed to take off pretty well, but didn’t quite hold onto enough viewers by the time we got to a season three decision.

Though squarely in the realm of such syndication “classics” as Hercules and Xena, there was some clear progression at work with this one, focusing as it did on rather more creepy and unnerving subjects, and (eventually) putting a good deal less “goofy” in its comic relief.

The second season kicked things up a notch, as defeat of one evil led to a quest to defeat supernatural evil, and there was a lot less time for the show’s fun side. The inclusion of a Mord’Sith as part of our merry band of adventurers made for most of the show’s best moments, and is ultimately such a strange endeavor that it warranted a featurette on the release, and a pretty solid one at that.

While the timing apparently wasn’t right, and the show suffered from an overuse of less than stellar effects and fight scenes, it stood out with more complexities than the genre is known for, and played up its love angle better than expected. As a weekly dose of adventure, Seeker was an entertaining option without much competition, and as guilty pleasures go, was an awful lot of fun.

The release isn’t exactly loaded with bonuses for those looking to own the series, but it makes a good effort considering the show was taken off the air. The two main featurettes, described below, are going to deliver for fans. The analysis of Cara is actually a lot of fun, even if you are mostly a fan only of the books. The other bonus is a behind-the-scenes look at the creation of the Underworld, which is somewhat standard in feel, and only goes so far, but is worth a watch. The only other bonus you get is a selection of extended scenes, and while some of them are fun, they don’t add a great deal of value.

Fans of the show will surely wish for a bit more, some interview footage for example, but it’s a true bonus to get anything on such a release.

Own it on DVD today! 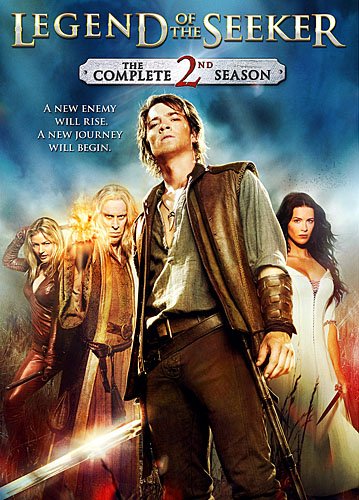 Featurette: What Could Have Been Deleted Scene

Return to a world of fantasy, adventure and romance with Legend of the Seeker: The Final Season. The battle between good and evil continues in this 5-Disc/22 Episode DVD Box Set. Relive every moment uninterrupted, plus enjoy more than five exclusive bonus features from the hit TV Series that is based on Terry Goodkind’s “The Sword of Truth” novels.

Millions of readers the world over have been held spellbound by this valiant tale vividly told. In the aftermath of the brutal murder of his father, a mysterious woman, Kahlan Amnell (Bridget Regan), appears in Richard Cypher’s (Craig Horner) forest sanctuary seeking help…and more. His world, his very beliefs, are shattered when ancient debts come due with thundering violence. In their darkest hour, hunted relentlessly, tormented by treachery and loss, Kahlan calls upon Richard to reach beyond his sword-to invoke within himself something more noble. Neither knows that the rules of battle have just changed…or that their time has run out. This is the beginning. One story. One Rule. Witness the birth of a legend.

“REDEMPTION OF A MORD’SITH: MEET CARA” – Join series newcomer Tabrett Bethell on set of SEASON 2’s Legend Of The Seeker as the fearless Mord’Sith, Cara. Bethell’s transformation into this feisty, quick-thinking warrior is instantaneous and seamless, as the actress dons the red leather outfit that immediately identifies her as a Mord’Sith, adapts to her character’s sexual whims, and battles Cara’s former allies with kicks, blows and the deadly Agiels – the Mord’Sith’s weapon of choice. Witness the entire creative transformation—from script read-through to dressing room to screen.

“UNDER THE UNDERWORLD” – One of the most fascinating aspects of the Legend of the Seeker is author Terry Goodkind’s depiction of the afterlife, a complicated and layered Underworld where spirits of the living reside. Discover the differences between the Underworld of the book and the series. Find out how artists and designers constructed the physical Underworld, and learn about the techniques that were employed to convey dark tones of anger and agony through makeup and set design.

The Importance Of Death from episode #222 – “Tears”