SundanceNOW Offers Up Amazing Selection Of Indie Greats And Newcomers

Another treat for independent film fans, SundanceNOW gives you the chance to rent or own some great indie classics, as well as hot new titles. With a solid interface, great video quality, and dozens of ways to search (by genre, festival, etc.), the site provides a great way to keep up with the independent world. The selection is pretty amazing, and titles that are on everyone’s lips from recent festivals are right along side some hard-to-find treasures (overlooked gem XX/XY jumped out at me).

Check out some more info below, including a couple of titles they are promoting right now, and go to the site and register so you can keep up to date, and bring home some of these great films.

The SundanceNOW library encompasses classic titles and the newest releases from around the globe.

Every month we will highlight different films from SundanceNOW‘s extensive collection. This month we’re featuring films that were favorites at the Sundance Film Festival, including Miranda July’s ME AND YOU AND EVERYONE WE KNOW.

——————————-
SundanceNOW: http://www.sundancenow.com/
The idea for SundanceNOW came from the lack of a single online destination where real independent film fans could find, watch instantly and discuss a broad range of independent, hard to find films from around the globe. We believe that SundanceNow fills that void by bringing hundreds of films to your computer screen.You can watch them immediately (and legally) and find several films from the same director or of the same genre quickly and easily.

In addition, new films are constantly being added to the service so there’s always a reason to come back.
SundanceNOW is a place for anyone interested in independent films both American and worldwide – from the die-hard fans, who we hope will become active members of our community, to those interested in browsing our extensive list of different genres and sampling something new. 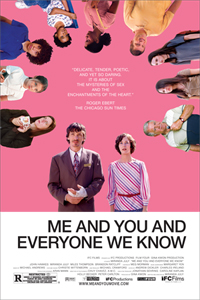 Richard Swersey (John Hawkes), a newly single shoe salesman and father of two boys, is prepared for amazing things to happen. But when he meets the captivating Christine, he panics. Life is not so oblique for Richard’s seven-year-old Robby, who is having a risqué internet romance with a stranger, and his fourteen- year-old brother Peter who becomes the guinea pig for neighborhood girls— practicing for their future of romance and marriage.

In July’s modern world, the mundane is transcendent and everyday people become radiant characters who speak their innermost thoughts, act on secret impulses, and experience truthful human moments that at times approach the surreal. They seek together-ness through tortured routes and find redemption in small moments that connect them to someone else on earth.

Synopsis: One of the most anticipated cinematic events of the year, Gaspar Noe‘s ENTER THE VOID is a visionary cinematic thrill ride that’s riveted audiences at the Cannes, Toronto, Sundance and SXSW film festivals.  Oscar and his sister Linda are recent arrivals in Tokyo.

Oscar’s a small time drug dealer, and Linda works as a nightclub stripper. One night, Oscar is caught up in a police bust and shot. As he lies dying, his spirit, faithful to the promise he made his sister that he would never abandon her refuses to abandon the world of the living. It wanders through the city, his visions growing evermore distorted, evermore nightmarish. Past, present and future merge in a hallucinatory maelstrom.

Though there are a few stumbles, NBC's Council of Dads has one of the best pilot episodes of television to come along...
Read more
Newsline