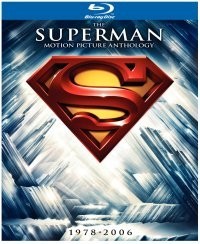 On June 7th, Warner Home Video is releasing a pretty fabulous collection, and I want to give you a preview of Superman: The Motion Picture Anthology on Blu-Ray.

This one is filled with extras, and includes alternate versions of the first two films. Check out all the info below, including the rundown of all the special features including in the set.

Superman, the cultural icon and quintessential superhero, is back in a big way. In a powerhouse year marked by the theatrical releases of several major superhero films including Warner Bros.’ Green Lantern, his arrival couldn’t be more perfectly timed. Warner Home Video (WHV) is celebrating the year of the superhero with the June 7 release of Superman: The Motion Picture Anthology (1978-2006) on Blu-ray.

For the first time, fans will be able to own one super-entertaining Blu-ray collection with all four original theatrical Superman films starring Christopher Reeve (available for the first time in high def), Superman Returns, and the two alternate versions of Superman I and Superman II.

The Collection also boasts 20 hours of bonus features including the never-before-seen original opening to Superman Returns. Also included are two documentaries in hi-def, Look, Up in the Sky! The Amazing Story of Superman and The Science of Superman, as well as You Will Believe: The Cinematic Saga of Superman, deleted scenes, and much more. Fan-boys and technophiles will especially appreciate that all of the Superman films are being released with English DTS-HD-MA soundtrack for superior sound quality. Also included is Movie Cash good up to $8 off one admission ticket to see the newest Warner Bros. superhero film, Green Lantern, at participating theaters between June 17, 2011 and July 3, 2011. 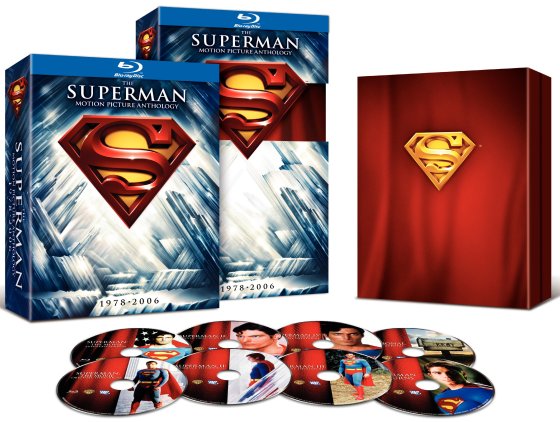 A box-office smash, an Academy AwardÒ winner and a fan favorite since it first flew into theatres in December 1978, Superman: The Movie assembles a cast and creative contingent as only a big movie can. At its heart (just as in three sequels) is Christopher Reeve’s intelligent, affectionate portrayal of a most human Man of Steel.

The movie’s legacy soared even higher when director Richard Donner revisited this beloved adventure 22 years later and integrated eight additional minutes into the film. Enjoy more footage of the Krypton Council, a glimpse of stars of prior Superman incarnations, more of Jor-El underscoring his son’s purpose on Earth and an extended sequence inside Lex Luthor’s gauntlet of doom. Reeve, Marlon Brando (Jor-El), Gene Hackman (Luthor) and Margot Kidder (Lois Lane) give indelible performances that fuel the film’s aura of legend.

“I thought the original Superman was terrific entertainment,” the Chicago Sun-Times’ Roger Ebert wrote, “and so I was a little startled to discover that I liked Superman II even more.” Unwittingly released from Phantom Zone imprisonment, three super-powered Kryptonian criminals (Terence Stamp, Sarah Douglas and Jack O’Halloran) plan to enslave Earth – just when Superman (Christopher Reeve) decides to show a more romantic side to Lois Lane (Margot Kidder). Gene Hackman (as Lex Luthor) also returns from the first film and with a top supporting cast, witty Richard Lester direction and visuals that astound and delight.

Superman II -The Richard Donner Cut delighted fans who, for years, had been imploring Warner Home Video to release the Donner cut. In fact, the director had already shot most of the Superman II footage during Superman: The Movie. But as production on the sequel continued, creative differences between the director and the film’s producers became irreconcilable and Donner left the project. Although Richard Lester was hired to finish production, he chose to make major changes to the film, leaving only vestiges of Donner’s original vision and concepts in the version of Superman II that was ultimately released to theaters.

Nearly thirty years later, Warner Home Video was delighted to grant the wishes of countless Superman fans. With this DVD release, Richard Donner had become the first director in history to be able to complete a film he left during production with nearly all his footage “in the can.” Adding back a substantial amount of that unused footage, the director has seen his original vision restored and brought to fruition.

Most notably, the “Donner cut” restores the Marlon Brando role, filmed for, but not included in the final theatrical release version of Superman II. The legendary Brando’s performance as Jor-El has finally been restored in key scenes that amplify the Superman lore and deepen the profound relationship between father and son.

With so many other changes, large and small, including a variety of Lois Lane (Margot Kidder) schemes to unmask Clark Kent as Superman, this Superman II proved to be an eye-opening experience and an important addition to film history.

After Superman: The Movie’s epic storytelling and Superman II’s awesome battles, how could the first two hits be topped? In Superman III, meet Gus Gorman (Richard Pryor), a half-witted computer programming natural. For him a keyboard is a weapon – and Superman faces the microelectronic menace of his life. Christopher Reeve reprises his most beloved role, deepening his character’s human side as Clark Kent reunites with old flame Lana Lang (Annette O’Toole) at a Smallville High class reunion. And when Superman becomes his own worst enemy after Kryptonite exposure, Reeve pulls off both roles with dazzling skill. Incredible visual effects abound – but above all it has heart, heroism and high-flying humor. All in superabundance.

Christopher Reeve not only dons the cape for the fourth time but also helped develop the movie’s provocative theme: nuclear disarmament. “For me, it’s the most personal of the entire series,” Reeve said. “It directly reflects what Superman should be, and should be doing.” Superman does a lot this time around. To make the world safe for nuclear arms merchants, Lex Luthor (Gene Hackman) creates a new being to challenge the Man of Steel: the radiation-charged Nuclear Man (Mark Pillow). The two foes clash in an explosive extravaganza that sees Superman save the Statue of Liberty, plug a volcanic eruption of Mount Etna and rebuild the demolished Great Wall of China.

He’s back. A hero for our millennium. And not a moment too soon, because during the five years (much longer in movie-fan years!) Superman sought his home planet, things changed on his adopted planet. Nations moved on without him. Lois Lane now has a son, a fiancé and a Pulitzer for “Why the World Doesn’t Need Superman.” And Lex Luthor has a plan that will destroy millions – no, billions – of lives.

Filmmaker Bryan Singer (X-Men) gives the world the Superman it needs, honoring the legend everyone loves while taking it in a powerful new direction. Brandon Routh proves a perfect choice to wear the hero’s cape, leading a top cast that includes Kate Bosworth as Lois and Kevin Spacey as Lex. And the thrills – from a sky-grapple with a tumbling jumbo jet to a continent-convulsing showdown – redefine Wow.