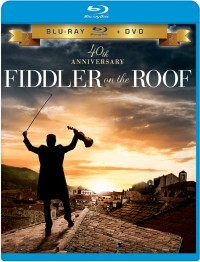 Somehow, Norman Jewison still doesn’t quite seem to get enough recognition. But, despite the fact that his name doesn’t leap to mind when thinking about legendary directors, many of his films make the list of all-time greats. One of those classics (missing out on many of the Oscars it was nominated for due to the domination of The French Connection) is now available on Blu-Ray, and the 40th Anniversary Edition of Fiddler on the Roof is an absolute must own title.

Few films have ever managed to stir such emotion and deliver such complexity of theme, especially when you consider Fiddler on the Roof‘s ability to balance the oppressive setting with the joy and vibrancy of life embodied by Tevye (in Topol‘s brilliant performance).

Eyeing marriages for their five daughters, each with the fire and spark of youth tempered into various manifestations by the determined good cheer of their father, Tevye and Golde (Norma Crane) alternate ideals, bouncing between taking life as it comes, and seeking out matchmakers.

Throughout the song and dance of hopeful marriage prospects, the family has to face the fact that they are in a world that is changing rapidly, and if we know nothing else, we know that nothing should be taken for granted.

Of course, the details of the film are largely irrelevant. I have another DVD release calling itself some sort of Special Edition somewhere in the house (and so do you). Few montage reels purporting to throw out any subsection of “best films” dare to leave out the glowing smile of Topol with his arms stretched wide. No, the question is, “Do you need this version?”

The answer is pretty solidly in the affirmative. You aren’t going to see this film the way it was intended to be seen without it, and you are never going to hear it better.

A new 7.1 audio track delivers incredible sound on this release, bringing to life some of the most treasured songs in the history of cinema. The video quality is not the best you’ll see, in a sense, but it is surprisingly sharp considering that this one makes no claims at any real remastering effort, and a certain softness was the aim of the visual effort in any case. That’s how it’s supposed to look, and it shows up brilliantly on the Blu-Ray. 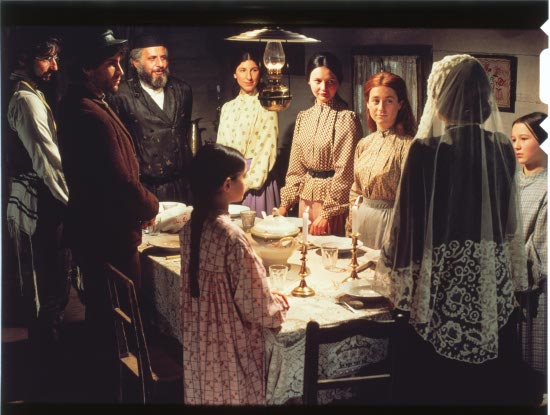 The only disappoint here is that none of the special features are really new entities. It’s easy to let that slide, because you get several featurettes and a commentary with Jewison and Topol that is among the best commentary tracks that have ever been made, but I’m sure a lot of people will be looking for something even more extra in their extra. I encourage you not to overlook this collection of extras though. As I said, the commentary is brilliant, covers a vast array of insights into the film, and is remarkably engaging considering the length of the film.

Along with the featurettes – which cover Jewison’s directing efforts, historical background on the film, and much more – you also get a deleted song. The sum of these bonuses add considerable value, and make a great package.

Check out several clips below, and make sure to pick this one up.
Fiddler on the Roof – Bonus Clip: “Tevye’s Daughters”

Fiddler on the Roof – Film Clip: “World is Changing”

A grand tradition of song, dance, and musical splendor returns to the screen when FIDDLER ON THE ROOF debuts on Blu-ray April 5th from MGM Home Entertainment in honor of the 40th anniversary of the classic film. Nominated for six Academy Awards® including Best Picture and Best Actor, Fiddler on the Roof is a universal story of hope and acceptance. Fans will also be able to experience a new 7.1 audio track on the Blu-ray version, bringing the Oscar-winning music to life like never before.

This lavishly produced and critically-acclaimed screen adaptation of the Tony Award®-winning Broadway sensation tells the life-affirming story of Tevye (Academy Award®-nominee Topol, For Your Eyes Only), a poor but soulful milkman whose love, pride and faith help him face the oppression of turn-of-the-century Czarist Russia. Tevye and his wife Golde (Norma Crane, “1984”) attempt to arrange suitable marriages for their five strong-willed daughters in poignant—and often amusing—moments that celebrate life and love.

FIDDLER ON THE ROOF Blu-ray debut recaptures the performances of such timeless songs as “To Life (L’Chaim),” “Matchmaker, Matchmaker,” “If I Were a Rich Man,” and “Sunrise, Sunset.” The film also stars Academy Award®-nominee Leonard Frey (Where The Buffalo Roam), Rosalind Harris (Mrs. Santa Claus), and Michael Glaser (“Starsky & Hutch”) in hi-def 7.1 audio.

FIDDLER ON THE ROOF Special Features: