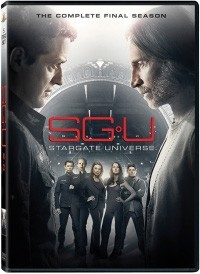 Stargate Universe was a tricky venture, but a risk I’m glad I got to see for as long as it lasted. The show drew heavy criticism from many franchise fans almost immediately, and never quite got the attention it needed, but it was an entertaining ride.

The second, and final, season found our crew battling for control of Destiny, continuing efforts to get home, and running into several time travel misadventures. The dark and stormy visuals continued, and the clashes among those trapped on the alien ship still didn’t make for a very happy home.

While occasionally rather screwier in its plot developments than necessary, and with some characters who are less than fully realized, the show delivers a wild creativity you don’t run into very often.

I suspect that the show’s general aim was its own downfall, as it tried to create a spin on an existing niche franchise that was more accessible to a broader demographic, and in the end, it wasn’t niche or mainstream enough to work for enough people. Adding to the difficulty and oddness of the effort, the show seemed to aim at varying demographics on an episodic basis, throwing out storylines that were more subtle on the “sci-fi” and heavier on the drama, with borderline wacky “sci-fi” the following week. The result was somewhat disjointed, and ultimately the sort of thing that, by trying to be for everyone, struggled to be for anyone.

Frankly, the show could easily have been developed without any tie to the franchise at all, and it might have had a stronger showing. We could have abandoned the effort to live up to franchise fan hopes, and while the franchise magnet will hopefully attract an audience, the opposite pole equally keeps people away who know the franchise and don’t figure they need to bother.

All that said, the show managed to spin an interesting yarn, and provide a much needed Sci-Fi fix. The numbers may have fallen during the second season, but the show was on the upswing. Finally entering a certain comfort zone, the character development was improving, the episodic stories were stronger, and the internal conflicts were developing into something besides the show’s main argument for changing the channel. The drama may still have been somewhat overplayed, but the series was truly becoming a fun adventure.

I have a feeling that this is a DVD release that people will keep coming back to, and it is definitely a release that takes the series out with a bang.

The release is packed with more bonuses than can really be covered. Every episode has a commentary by varying members of the cast, and even moderate fans are going to love riding through the entire season with the stars. The rest of the special features cover a wide variety of ideas, and none of them are especially long. Some of them are smallish soundbite pieces with members of the cast discussing certain topics, while others are behind-the-scenes or detailed looks at scenes, locations, episodes, or the Destiny itself. You also get an occasional featurette like How to get Sucked Into Space, just so that we don’t become too serious.

Most of the bonuses are pretty self-explanatory in terms of what you’re in store for, but many of them are better than you may expect. The directing featurettes may not sound like much at a glance, but they are surprising cool walks showing what goes into putting the show together.

Overall, it’s an impressive package, and one that even casual fans will enjoy far more than your average television release.

For a mismatched ensemble of space travelers, the journey across the universe becomes a test of their true characters. Follow the dramatic stories that unfold in the second and final season of “STARGATE: UNIVERSE” by catching STARGATE: UNIVERSE Complete Season 2 on 5-disc DVD on May 31st from MGM Home Entertainment. In addition to all 20 episodes experience over two hours of all-new special features including SG-U Welcomes You to New Mexico’s Bisti Badlands (an in-depth piece about the filming in New Mexico for the episode “Malice”) and Pitches: A Journey of Friendship and Discovery (a piece that showcases the development of an episode from ideation to screenplay). And in keeping with the tradition of the franchise, audio commentaries are included on all episodes.

STARGATE: UNIVERSE Complete Season 2 continues the saga of an unlikely group of cosmic explorers aboard the spaceship Destiny as it soars to the furthest corners of the galaxy. Struggling to control the ship’s systems, the crew suffers from a lack of supplies and no knowledge of its final destination. Tempers flare and personalities clash—especially between Dr. Rush (Robert Carlyle, Trainspotting) and Colonel Young (Louis Ferreira, Dawn of the Dead), who struggle for leadership of the group—as they face uncharted space and unknown enemies who would take the ship by force. Through it all, the Destiny crew must persevere in their struggle to stay alive, bond together, and find a way back home to Earth.