When the subject of Disney movies comes up, one film always stands out to me as not getting enough attention. The Fox and the Hound is now out in a 30th Anniversary Blu-Ray release which includes The Fox and the Hound 2, and I’m hopeful that the re-issue allows another generation to add some support to the popularity of both films.

For all that weaves of complicated friendship are not at all uncommon, there is a unique mix at play in The Fox and the Hound that delivers exceedingly well to younger audiences. Not only, as we all know, a fun and engaging movie, but an interesting and relatable situation for all kids, who find friendships waxing and waning.

The presentation of how all aspects of one’s life can put pressure on actions, and perspectives can be complex and blurry, is wonderfully drawn, and surprising purposeful to kids who only know that now Johnny isn’t nice anymore, and have little idea how to make sense of the fact.

This may be to wax overly poetic about a children’s movie, and normally the themes and life lessons, even of Disney films, don’t remotely live up to the theories behind them, but in this case, the development is both focused and understated, and the results exceed any expectations.

It’s simplicity is perhaps largely responsible for the fact that it simply isn’t the title that leaps to mind when you think of Disney films, but that simplicity brings the characters and story to life all the more.

The Fox and the Hounds 2 is perhaps overly infatuated with spinning music into things, and while it hasn’t quite as much heart, it’s a peppier ride, and loads of fun. It may not perfect a story that embodies childhood friendship struggles to the same degree, but it still has a solid effort behind it, and again relates a common theme everyone, young and old alike, have some experience with – the battle with jealousy. 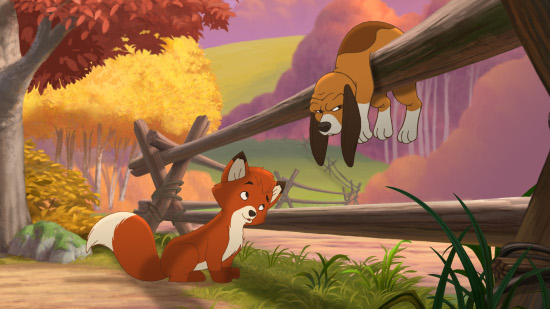 The combination of voice talents, clever writing, and Disney charm, make this one a treat among sequels, which are often deserving of a fair amount of contempt. Many have become jaded, with good reason, by the future installments of some of their favorite films, but this one is a worthwhile, if slightly hokey, effort.

To get both of these films together is a treat, and getting The Fox and the Hound in HD is worth it in itself. Much like the recent release of Bambi, there is something a little odd about popping the title into your Blu-Ray, what with the simplistic animation style (as today’s audiences will likely view it) which hardly appears to require any great effort at revealing the detail. Be that as it may, the movie looks amazing, and though it isn’t as automatic an appreciation as massive explosions and special effects, the detail of artistry is its own bonus for fans. The new digital restoration is superb, and having both films on one disc is a nice bonus as well.

The Blu-Ray itself has only one bonus feature, Unlikely Friends, which is a collection of stories about unlikely friendships in the animal world.

The individual movie DVDs have a couple more treats, but aren’t especially loaded. Passing the Baton: Making of The Fox and the Hound is just what you expect from a Making of featurette, but with the addition of a lot of material covering the transition The Fox and the Hound represented at Disney. You also get a Sing-A-Long, a music video, and a featurette on putting the music together for the second film. You can find more details below, but overall this is not a release that is focused too much on loading bonuses into things. It’s not surprising, but I know fans will wish there was a little more, especially in terms of things the younger crowd can explore. 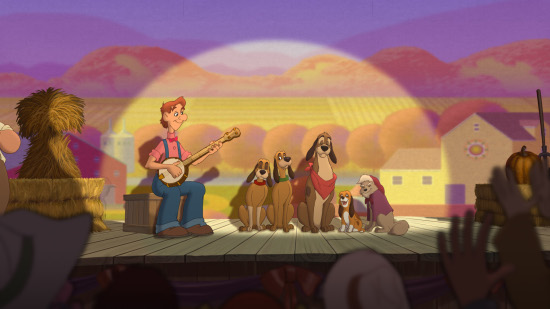 You probably really need to take a few points off for the lack of bonuses, but this is still a great release. Check out all sorts of additional info below, and make sure this one gets on your list.

In the tradition of heart-warming films, such as Bambi and Dumbo, comes Disney’s classic tales that taught us the power of friendship in The Fox and the Hound and The Fox and the Hound 2, in a special 30th Anniversary 2-Movie Collection. For the first time ever in high-definition, consumers can now experience the brilliant, humor-filled adventures of best friends Copper and Tod in an all-new digitally restored version of the original 1981 film, arriving to stores on August 9, 2011.

Featuring an all-star cast of voice talents, toe-tapping music and fantastic bonus features, consumers can take home two of Disney’s beloved “tails.” The Fox and the Hound and The Fox and the Hound 2, 2-Movie Collection features both movies in a single 3-Disc Blu-ray Combo Pack. This release provides families with the value, versatility and opportunity to enjoy their favorite movies how they want, when they want and on the entertainment platform of choice – whether it’s in the home, on a portable device and/or in the car.

The Fox and The Hound, Disney’s 24th animated feature released in 1981, marked a “changing of the guard” from the legendary “nine old men,” including Wolfgang Reitherman, Frank Thomas and Ollie Johnston, who had joined the studio its very early days and worked closely with Walt Disney to develop Snow White and the Seven Dwarfs, the very first animated feature, then went on to create timeless classics such as Cinderella,Bambi and Lady and the Tramp.

The voice talent on The Fox and the Hound was also a mix of old and new Hollywood with veterans such as Mickey Rooney (National Velvet, The Black Stallion), Pearl Bailey (Porgy and Bess) and Pat Buttram (TV’s “Green Acres”) joining up-and-coming stars Kurt Russell (Escape From New York, Miracle) and Corey Feldman (Stand By Me, The Lost Boys).

The Fox and the Hound: