The best thing ABC‘s Last Man Standing has going for it is that TV Land is now producing its own shows. If this Tim Allen effort had come out a couple of years ago, I might have bet that it had no chance at all. That isn’t to say that I don’t like it… it’s average-ish when all is said and done…, but I wouldn’t have had a lot of hope for it actually getting viewers.

It has some good elements to it, and if Tim Allen has proven one thing over the years, it’s that he’s rather watchable. The kill of the show, in terms of predicting positive results, is that it feels like it comes straight from the glory days of Home Improvement, as though we were throwing out another venture during the early ’90s, as opposed to the early ’10s. It’s a show that, if I had to guess, might have taken off like a rocket somewhere around ’93, but it feels like such a throwback, that it’s hard to imagine it working in today’s market.

Unless you’re up on TV Land. Of course, something can be a hit on cable and not have anything like the numbers ABC is probably expecting, and at the same time, Tim Allen’s pseudo-dopey, family feel-good playtime isn’t in a ’90s market, so you can certainly never be too sure, but it seems like someone might be onto something here.

It’s actually not especially removed from the last time we saw Allen fumbling through “running” a household. He’s still a manly man, only this time he’s a fairly big man at a hunting retail store as opposed to a tool man, but he still mostly goes on about generally being manly, and scoffs at such things as fantasy football and not being able to change a tire. This time his family is comprised entirely of women though (insert joke about the staggering “difference” here), and now that his wife is taking a promotion, he’s going to have to be the go to parent a lot more often. 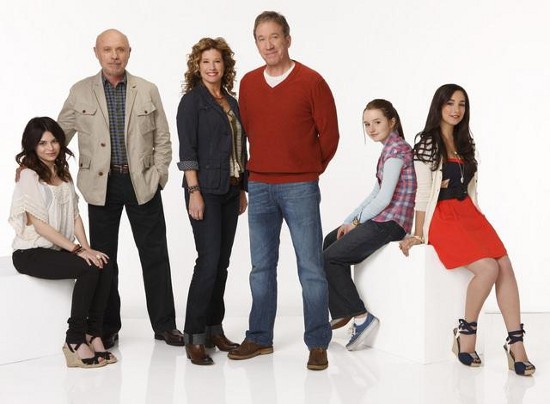 If you turn back your internal clock a couple of decades, the general scheme is pretty familiar. Allen plays Mike Baxter, and he’s dealing with his wife, Vanessa (Nancy Travis), and three daughters of a variety of ages, including Kristin, the 20-year-old with her own son. Not only is Mike’s life turned around by the fact that he’s going to be home a lot more often, but he’s also gone from his dream job as the travelling catalog-producer for the most manly of stores, to the guy who has to figure out how to increase their online sales. In the end, taking a page from his daughter’s, very general vlog that most relates “dad unhappiness,” he uses the store’s website to host his “man rant” vlog, which has little to do with selling anything, but has gone viral.

It may not be what you expect at this point, but the show delivers a kind of warm familiarity that is largely missing from television these days, and while not anything like the best show on television, it’s one of the “easiest,” and it’s decidedly watchable for anyone who isn’t immediately turned off by Allen in general.

We may not to get used to the daughters a bit more than the first couple of episodes give us in order to draw a solid conclusion, but they seem to work the camera, and the comedy, quite well to this point. From the inexplicable waterworks that Dad can make no sense of, to the fairly tomboyish daughter, who Mike still can’t quite connect with, the family comes through well, and so does a more honest than normal look at the nonsense that actually takes up most of a parent’s day.

If the show really gets legs, it will probably be the result of Hector Elizondo (as Mike’s boss), who is already taking over every scene he’s in, and Nancy Travis, who is still somewhat questionable as the matronly foil to Mike’s “rub some dirt on it,” uber-MAN.

The question, of course, is, should you watch it, and I think the answer’s yes. I can only give the show about 3.5 stars out of five, but it’s an easy recommendation nonetheless. You’ll either fall for it, or you’ll ditch it altogether, and you’ll come to the decision pretty quickly. If the popularity of similar throwback shows is any indication, there’s a decent audience for exactly this show, and you probably know who you are.

TV titan Tim Allen returns to ABC as Mike Baxter, world voyager and one daredevil of a marketing director who is about to face his greatest challenge yet…his family.

After Mike’s wife, Vanessa, (Nancy Travis) receives a promotion at work, Mike must spend more time in his female-dominated household. With years of advice and guidance from their nurturing mother, Mike’s three daughters are not prepared for their old-fashioned, hotheaded father to take over. Especially 20-year-old Kristin, who’s trying to raise her own son, Boyd, with more of a liberal approach than Mike can stand.

When he isn’t reclaiming the masculinity in his home, Mike works at the sporting goods man-cave, Outdoor Man: A place where men can buy guns, jerky and a camouflage recliner in one testosterone-fueled location. Mike’s boss, Ed, took Mike off of his thrilling magazine expositions and stuck him in front of the computer to supervise the company’s website. With the help of his naïve subordinate, Kyle, Mike runs the Outdoor Man video log, which not only explores the store’s stock of man-gear, but also helps Mike express his biggest concern with the 21st century: “What happened to men?”