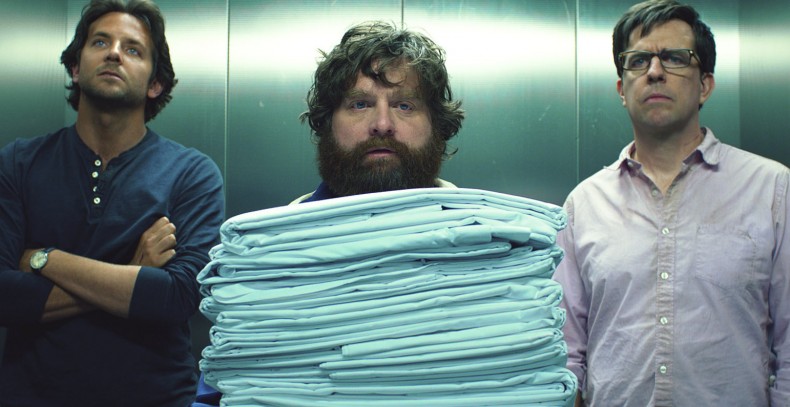 The Wolf Pack is back, and this time they’re terrorizing Thailand. The Hangover Part 2 is on Blu-Ray, and I’ve got your copy waiting for you.

This time around, suspect of everything at this point, Stu (Ed Helms) doesn’t even want a bachelor party, and it’s only by way of a guilt trip that Alan (Zach Galifianakis) is allowed to come to the wedding at all. In fact, Stu is so paranoid that he doesn’t want to leave his finacee’s side, and is only willing to have one beer with the guys, because he opens it himself.

Of course, it would be an awfully short movie if they didn’t wake up in outrageous circumstances, and now we find ourselves in Bangkok, and we better piece things together quickly, because the bride-to-be’s little brother is gone… but we’ve got his finger.

It’s ultimately more of the same, and it’s a wild trip through the streets of Bangkok, trying to piece together bars, tattoos, monks, and strip clubs, and figure out what exactly happened, and how that might lead them to their missing friend.

While filled with more zany episodes, and sure to inspire at least a few laughs, there’s something about running this course that doesn’t quite work the second time around. The first one was not only filled with humor, but the uniqueness of the idea was the best element, and raised the comedy on its own. Now we’ve been down the road, and as much as there are undeniably funny moments, the overall product is somewhat stale, and just doesn’t pull you in the way it did the first time around. Worse, though rather unavoidable, a good deal of the movie is covered simply by the characters’ repeating that they can’t believe this is happening again.

There’s something to be said for popping some serious craziness into the Blu-Ray once in a while, and for the proper mood and setting, this one won’t disappoint… much, but it won’t hold up to the original for most, and those looking for more of this is a limited enough demographic.

That said, the stars (including Bradley Cooper and Ken Jeong) have a certain charm that is inescapable, and can make the most out of a mediocre situation.

The Blu-Ray quality is certainly good enough, and it’s hard to imagine an overabundance of interest in the video quality on this one. The special features aren’t bad, though one might expect a few more of them.

There’s a gag reel, a featurette on the monkey, and oddly enough, a fake documentary that purports to be of someone trying to expose that real-life craziness that went on during filming. The general idea behind it is that making the film is just an excuse to have a wild vacation in Thailand (which is obviously true), and a certain documentary filmmaking hopeful accosts the stars and director at press junkets and so on, trying to get to the truth. It’s not a bad piece actually.

I’m going to make this one a Facebook Liker giveaway. If you already like us on Facebook, you don’t have to do anything. If not, see the box below, and click that thing. Winner will be randomly selected on January 20th.