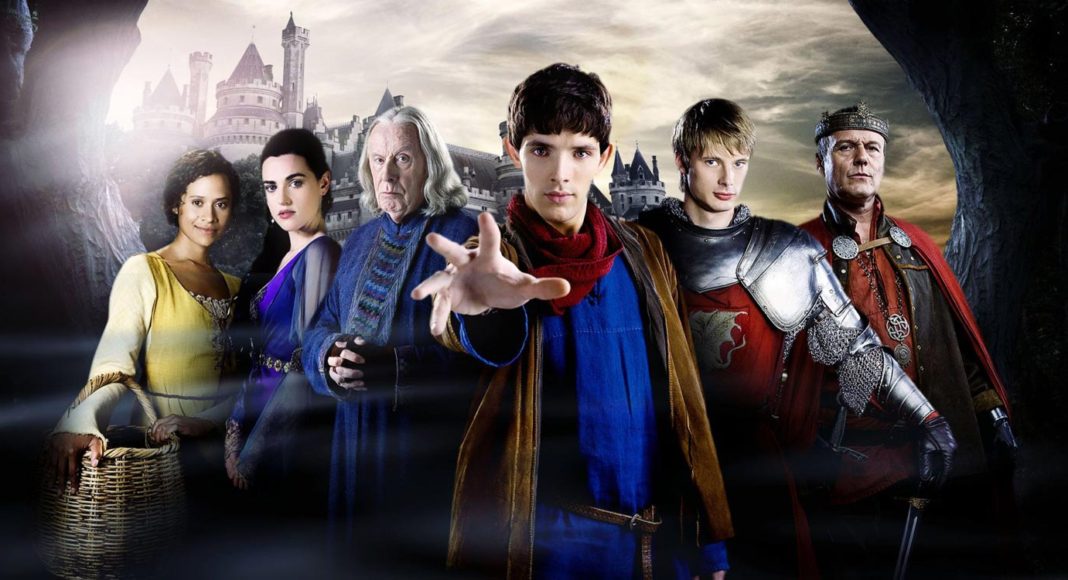 Merlin continues to surprise, and now that we’re underway on the fourth season, it’s a great time to look back and/or catch up on events in Camelot. The third season DVD set is as surprisingly well put together as the show itself, and considering the overall production, budget, and general possibilities inherent in the beast we’ve got, you could hardly ask for a better release.

While not exactly overloaded with special features, it includes cast and crew commentaries, which fans will love, and a pretty solid Making Of featurette.

For all that the show is something of a write-off, and all too simple to dismiss for many a viewer, the third season kicks things up a notch, and the writing is often surprising. As may be easily guessed, the rub of the show is dealing with its general premise – the fact that Merlin has to hide his magical talents – while trying to push forward in the long arc.

Sure, it’s great fun to have episodes with goblins and so on, and the overall structure inherent in Arthur and Merlin having to eventually come together, despite living in a land where using magic is an instant death sentence, but ultimately things have to progress pretty seriously, or it’s going to get old fast.

In an effort toward moving away from the tedium of figuring out how Merlin is next going to disguise his magical efforts, season three moves forward with some bigger issues. We kick off with Morgana’s return (and the idea that we’ve fast-forwarded about a year), and we quickly make our way to focusing on her magic, and dastardly plans. We also move forward with Arthur and Gwen’s relationship, form the Knights of the Round Table, and we are met with a couple of different predictions of the future which need to be dealt with. All of this distracts us quite a bit from needing to put quite so much effort into disguising Merlin’s magic, and makes for complex storylines that manage to suck viewers in.

The DVD release also includes the usual suspects (Deleted Scenes, Outtakes, Photo Gallery, etc.), but the commentaries are the true sell. They’re a lot of fun actually, and focus quite a bit on the fun and magic involved with the episodes, as opposed to anything that might indicate taking the show too seriously. The Making Of featurette is a nice treat as well, mostly insofar as it delivers some idea of how such things get put together with what is obviously not a major budget behind it all. Beyond that, even just getting extended looks at the filming locations is worth a view.

Overall, this is a show which obviously has a relatively high “cheese” factor, but that shouldn’t overly sway opinion in this instance. It’s a fun show, and the writers aren’t just knocking out episodes. There’s a lot going on here, and there’s something to be said for even a somewhat goofy adventure that is at least given a real effort.

Join our heroes Merlin and Arthur as they face their greatest challenges yet – long-buried secrets are exposed and old friends choose new sides, and Merlin and Arthur discover that the great battle for Camelot is only just beginning…

The season begins more than a year after Morgana (Katie McGrath, W.E., The Tudors) went missing, with Merlin (Colin Morgan, Doctor Who, The Catherine Tate Show) and Arthur (Bradley James) ordered by King Uther (Anthony Head, Buffy the Vampire Slayer) to search the kingdom for her. They discover her emerging from the mist after a battle, and return her to Camelot for care – but Merlin quickly comes to question where her allegiance lies, especially when he discovers she’s still in touch with her evil half-sister Morgause, who is determined to overthrow Uther and seize the throne of Camelot.

In a season filled with wizards, armies of the dead, goblins, and the return of The Great Dragon (John Hurt, Hellboy, the Harry Potter series), can Merlin continue to counter Morgana’s plots as she gets closer than ever to the throne? The third season premiered in the U.S. on Syfy last winter – and a fourth season begins at 10 p.m. ET/PT Friday, January 6, 2012. The newest season of Merlin will also premiere on SPACE in Canada on January 7, 2012. Take home Merlin: The Complete Third Season and catch-up on the show Wired.com called a “sci-fantastic remix of Arthurian legend.”

I’m making this one a Facebook Liker giveaway. If you already Like Are You Screening? on Facebook, you’re all set. If not, find the box below, and Like us for your chance to win this and lots of other great prizes.