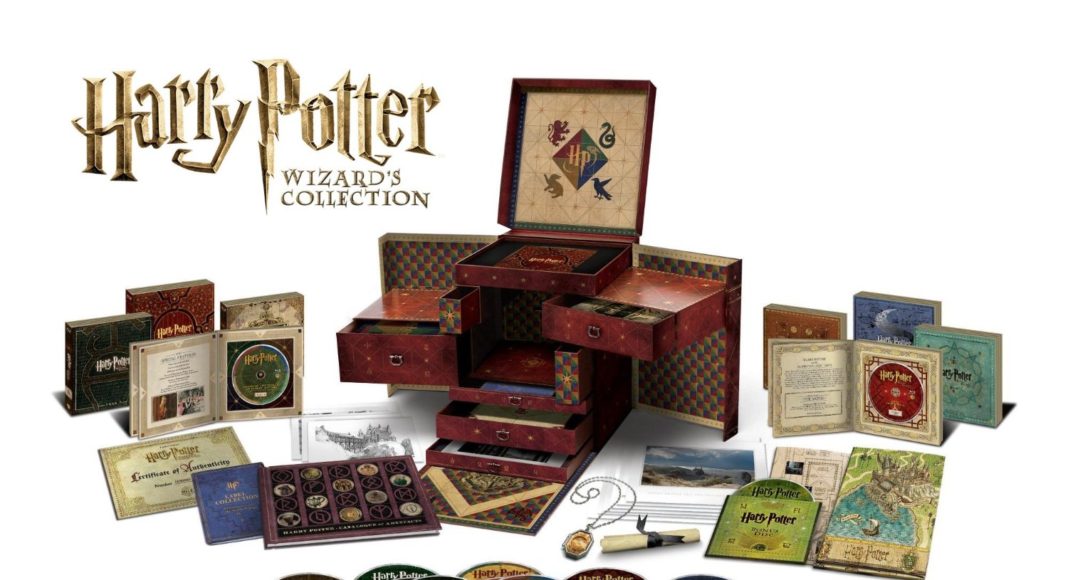 Grab a seat Potter fans, because you’re mind is about to explode. On September 7th, you are going to have the chance to buy one of the most… well, most home video releases you’ve ever seen. The Harry Potter Wizard’s Collection is coming. Now, you’ve seen me cover the Ultimate Edition releases of the films, and they have been pretty spectacular, but you ain’t seen nothing yet. 31 Discs with everything previously released, and five new hours of material. And, all for the nominal sum of $499.99. It’s a limited and numbered collection, so you may as well just camp out now. Check out all the details below. Let me hear your thoughts on this one as well. I mean, it looks awfully slick. Is it on your wishlist? What more could you wish for in a set? Or, do you just own all the Ultimate Editions already?

New Limited and Numbered Collection Is Largest Ever for Warner Bros.

The magical film franchise that enchanted Muggles around the world is now available in a spectacular limited-edition collectible box set. The most comprehensive Harry Potter movie collection yet, the Harry Potter Wizard’s Collection, featuring all eight films, exclusive never-before-seen content and must-have memorabilia, will be available on September 7 from Warner Home Video. This new limited and numbered 31-disc collection contains all eight Harry Potter movies on Blu-ray, DVD and UltraViolet Digital Copy and more than 37 hours of special features including all previously released materials and more than 10 hours of new to disc bonus content, and 5 hours of never-before-seen material. Witches and wizards that think they’ve seen everything will marvel at the all-new special features including the final two “Creating the World of Harry Potter” features titled “Story” and “Growing Up”. Many other, yet to be revealed, exciting features, are also included. The Harry Potter Wizard’s Collection will also allow fans to conjure up every available version of all eight films. In addition to the theatrical release of every film, the collection also includes the extended versions of Harry Potter and The Sorcerer’s Stone and Harry Potter and the Chamber of Secrets; and the 3D versions of Harry Potter and the Deathly Hallows –- Parts 1 and 2. Beautifully packaged in a stunning gift box measuring 12-3/4” x 10-9/16” x 11-1/4” and weighing 19 lbs, the Harry Potter Wizard’s Collection is the largest collection ever released by Warner Bros. and contains eight artistic and authentic film memorabilia that are essential for anyone who has ever dreamt of being accepted to Hogwarts. The collectibles are exclusive to the set, and each item along with the rest of the contents of this epic collection will be revealed to anxious fans in an online campaign on www.harrypotter.com beginning today.

Films Included in Collection – All on Blu-ray, DVD and UltraViolet Digital Copy