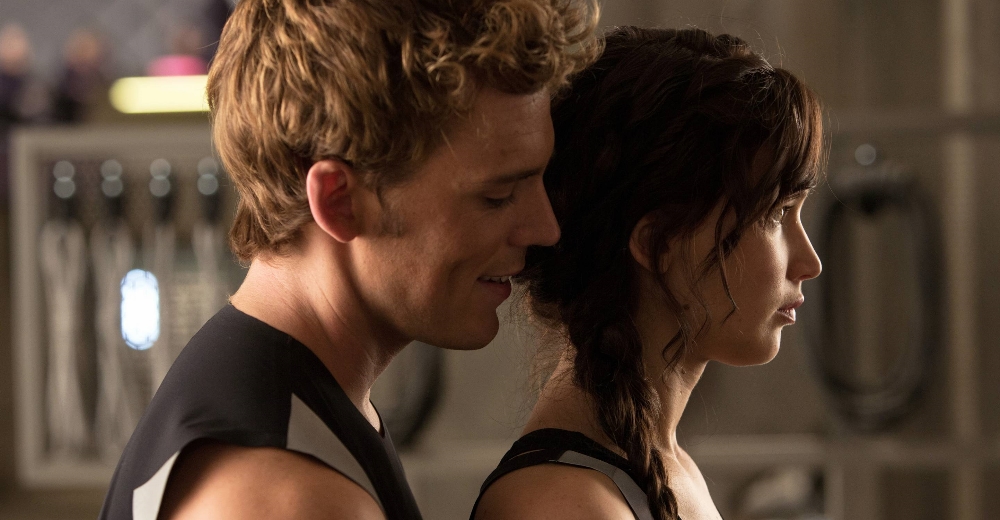 As seemingly irrelevant as it may be – to review – (as is the case with Twilight and Harry Potter), there is more to explore in The Hunger Games than meets the collective consciousness. And, while anyone might assume that everyone who is going to see The Hunger Games has, in some kind of cosmic-ultimate sense, already seen it (if not in the literal sense by now), it is actually only that this may be so, and not that it should be so.

The dystopic death match, though apparently popular among the same target demographic as… less interesting things, has a depth and breadth that lends itself to a much broader range of perspective fans, and the film delivers a surprising amount of cultural and societal statement, even leaving off that which is heavy-handed and obvious by the very nature of the plot.

Katniss Everdeen (Jennifer Lawrence) lives in a world that exists at some unknown point in the future when nations as we know them do not exist anymore. She’s from District 12, one of now 12 districts that, basically, exist in a form of slavery to those residing in the capitol, who get fat off the half-starved toil of those in the districts who mine coal, produce food, etc.

74 years ago, the districts rebelled and there was a rather serious war. The powers that be won, and as part of the peace treaty, The Hunger Games were born. Each year, each district sends a young man and young woman (12-18) as a sort of offering, and they are put in an “arena” to kill each other until one remains. This is, of course, a very popular television show back at fat cat central. Chosen by lottery, those in the districts can put their name in more than once as the years go on, in exchange for extra food. When Katniss’ little sister is chosen, despite the extreme unlikeliness given her one entry among hundreds, Katniss volunteers in order to save her.

She travels to the Capitol with the boy chosen from her district, Peeta Mellark (Josh Hutcherson), whom she vaguely knows as the baker’s son. Along with the other participants, they will be trained over the course of a few days, and be mentored by previous winner Haymitch (Woody Harrelson) and Capitol liaison (or whatever) Effie Trinket (Elizabeth Banks). There’s much more to winning the games than just the ability to kill, though due to her illegal hunting, Katniss has a fair game ahead of her in that department. Often more important is managing to get sponsors, wealthy backers who can pay to send vital supplies to a contestant during the battle. Haymitch and Effie are key in getting Katniss to understand this importance, and teaching her how to play up the crowd in order to win people over, but equally integral to this process is fashion coordinator Cinna (Lenny Kravitz).

Then they’re thrown into the wild, and left to slaughter each other.

The plot is ultimately as unimportant as it is a foregone conclusion, and the real meat of the matter is the film’s ability to put forward its statements and sentiments while we’re on the ride. The blatant contenders and references come through without being too overbearing, no small feat for such a film, and in the big picture we are treated to an entertaining escapade that’s solidly in the crowd-pleaser realm, but the smaller touches give the film the majority of its true positives.

Being under the thumb of the government is certainly at the forefront of the film’s talking points, but under that rather cheap and splashed-on facade are the details that merit interest. Not simply the fact of the haves and the have nots, for example, but the minutiae they contain. From the President’s inhuman attitude, and where and how it colors his speech and thought, to the ludicrous fashions embraced by the individuals and culture left with nothing to do with their lives.

At still a more interesting level, the film (much to my surprise) paints a layered picture of how we come to know, like, trust, and love people, and how the cold realities of our individual situation colors that process, and how it is by virtue of this that we come to know who we are ourselves. This is perhaps the showcase of the film, as it is led and pushed by Harrelson and Kravitz, who both make the most of sadly short appearances, and to a lesser extent by Stanley Tucci, who should get a bonus for masterfully playing a multi-faceted and bewilderingly likable character playing a hollow, shallow caricature.

In the end, the film delivers about as strong a package of entertainment and watchability as could ever be expected, and despite catering too much to fans of the novels, it’s a fun movie that doesn’t bog down as much as the two hour and twenty minute run would lead you to expect. The acting is fine when it is not superb, and there is an undeniable charm spilling out of everyone involved.

This may well come down to an idea of it being “really good garbage” to many, but the film should not be dismissed out of hand by anyone.

Still, apart from the above-mentioned, the film has most of the problems you’d expect, drags in parts, and somehow doesn’t have the self-confidence to quite be the daring vehicle it ought to be. Obviously reined in by a certain regard for novel fans, the film aims too much to be a straight adaptation instead of a working screenplay, and it suffers for it.

Worse, the film “ends,” only in a sense similar to watching a romantic comedy that at a certain point fades to black with the words, “Yada yada yada. They get together and whatnot.”

After all that, I find myself compelled to rate the movie to the upside of the teetering point. Whatever else may be said, and wherever we might enter this movie from, it is about something, and what it is about is something, and someone, that ought to appear in more films.

If you haven’t caught it yet, Are You Screening? took on The Hunger Games in our inaugural RU? Instant Reaction Review BlogTalkRadio Show and Podcast. You can check it out below.