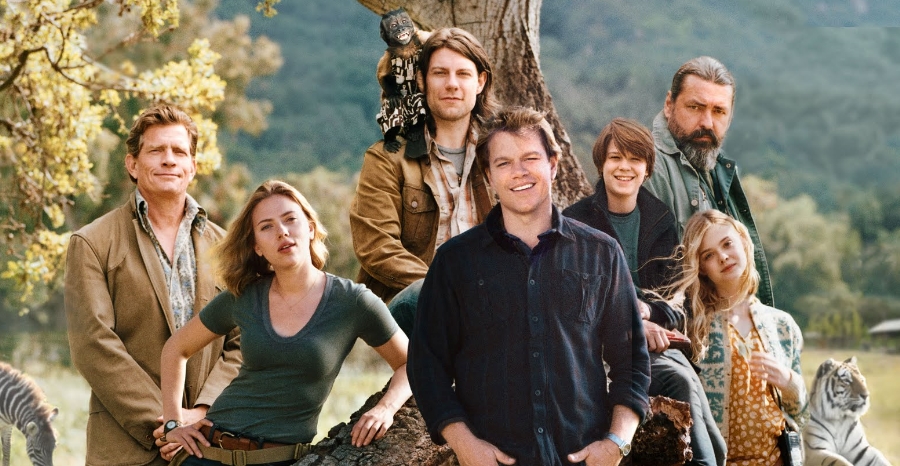 We Bought A Zoo Blu-Ray Review

2011 was a year that saw Matt Damon in a surprising number of releases, and it may be remembered as the year he (and his films) didn’t manage nearly the level of credit they deserve. Though The Adjustment Bureau was received positively, by the end of the year it seemed that most had forgotten about it. The same is true of Contagion, although you’ll find that one on some lists of the best of the year. Margaret, in the category of “finally released films” was a hit with many critics, but most among the general public never even heard of it.

And then there’s We Bought a Zoo. Even with Matt Damon and Scarlett Johansson starring, and Cameron Crowe directing, the film’s theatrical run, despite making a solid showing in ticket sales, seemed to fizzle out, and certainly didn’t have people talking nearly as much as I expected.

Based on a true story about a now thriving zoo in England, I have to wonder if part of the reason the film didn’t take off to the extent I had hoped is a result of some of the marketing. The fact that the home release declares the film is, “From the director of Jerry Maguire,” feels like a clue. “Cameron Crowe” isn’t what we’re looking after for some reason, and pushing him as the director of Vanilla Sky, or even Almost Famous, might not sell “family film,” but if We Bought a Zoo is anything at all (especially if we’re going back that far anyway), it’s “From the director of Say Anything…“.

One of the hurdles of a film like this, is balancing the people who may want to see it for the legitimate and touching true story it is, against those who are apt to be more interested in the screenplay necessities – like the love story, and the time spent dealing with the troubled youth – that are the parts far more “based on” than they are “true story.” The problem in this case is that the film does a far better job at actually delivering than the majority of its marketing campaign leads you to believe.

Matt Damon stars as Benjamin Mee, a thrill-seeking reporter who finds himself struggling after losing his wife to illness. Not only does he have to raise his two children, pre-teen Dylan and darling 7 year-old Rosie, but his job is in a tenuous position as newspapers start losing the battle to the internet. Still haunted by his wife’s memory, and unsure how to deal with Dylan’s outbursts that have now gotten him expelled from school, Benjamin decides the family should move to a new house, and really start over. When he finally finds a place that has everything he wants, it happens to have a zoo attached to it.

It isn’t just a zoo either, which might be somewhat easier to deal with, but a closed, rundown zoo that needs a lot of work before it can be opened to the public. On government-assisted life support, time is running out for the animals, and the small crew still keeping those animals alive and in decent health. Led by Kelly Foster (Johansson), the crew is as varied and quirky as the 47 animal species Benjamin now finds himself in charge of, and if he doesn’t figure out a way to make things work in a hurry, the zoo won’t be able to open for the summer, and all his money will be down the drain.

There is too much to do, Benjamin has no idea how to do any of it, and time and money are in short supply. That only adds to the problems he brought with him, which he finds don’t simply disappear because you have to rebuild animal shelters and figure out ways to buy massive quantities of fish.

In the end, it may come down a bit simplistically, but Benjamin Mee’s infectious attitude, and theories of life win out, and everyone involved realizes that sometimes the answer really is just to live. The trick, of course, is that, depending on the question, that answer may seem nonsensical. That doesn’t mean it doesn’t work.

The movie is filled with great supporting efforts, and though occasionally overboard for comedic effect, they are refreshingly honest roles, I assume much to the credit of Crowe. We expected it of Thomas Haden Church, who plays Benjamin’s brother, but Angus Macfadyen, Elle Fanning, John Michael Higgins, and Colin Ford and Maggie Elizabeth Jones as the children, give better performances than might be expected in such a vehicle.

The Blu-Ray itself may not overly sell the abilities of the medium, simply by virtue of not being a film that incorporates the kind of shots that make it possible, but the video quality is crystal clear nonetheless. It’s possibly overloaded with extras, offering more deleted and extended scenes than anyone needs, but the featurettes are nice additions. Mainly, The Real Mee is a selling point, introducing the actual Mee family (who have a very short spot in the film itself), and walking through the real story, and the real zoo, with them. Everyone is going to watch this, and though it is put together as a pretty standard “featurementary,” the subjects are too good to miss.

You also get a couple of other featurettes, including a Making Of effort, a gag reel, and a commentary track with Director Cameron Crowe, Star J.B. Smoove and Editor Mark Livolsi. They’re all worth watching, and any commentary with Crowe is going to be pretty interesting, but none of it quite compares to going truly behind the scenes with the Mee family. Possibly the best bits of these other features are the moments when Crowe dives into the decisions behind the film/screenplay construction.

Overall, this is a must-own for most, and especially for anyone looking for family-friendly titles. The Blu-Ray even offers a second audio track that has a “Family Friendly Seal of Approval.” The film itself is a win, and the Blu-Ray has just the right mix of treats to offer real additional value.

This Easter, be unpredictable, do something crazy and embrace your wild side! Twentieth Century Fox Home Entertainment presents an inspiring adventure based on a true story of one man who brought a zoo back to life and family back together in WE BOUGHT A ZOO, arriving on Blu-ray, DVD and digital download April 3. Directed by acclaimed filmmaker Cameron Crowe (Almost Famous, Jerry Maguire) and starring Matt Damon (Contagion, True Grit), Scarlett Johansson (Iron Man 2, Vicky Cristina Barcelona) and Thomas Haden Church (Easy A, Sideways), WE BOUGHT A ZOO is “a sweet-natured tale…that you’ll want to see with your kids” (Liz Braun, Jam! Movies).

Benjamin Mee (Damon) is a Los Angeles newspaper columnist and adventure writer who, as a single father, faces the challenges of raising his two young children. Hoping that a fresh start and a new life will restore their family spirit, Mee quits his job and buys an old rural house outside the city with a unique bonus feature: a zoo named the Rosemoor Animal Park, where dozens of animals reside under the care of head zookeeper Kelly Foster (Johansson) and her dedicated team. With no experience, limited time and a shoestring budget, Mee sets out with the support of his family and the local community to reopen the zoo. Now, Benjamin is no longer reporting an adventure story; he’s living it in his own backyard.

Featuring an incredible musical score composed by Jónsi of the band Sigur Rós, the WE BOUGHT A ZOO Blu-ray is loaded with over 2½ hours of special features including 20 deleted and extended scenes, a gag reel, four behind-the-scenes featurettes, commentary with Director Cameron Crowe, star J.B. Smoove (The Sitter, “Curb Your Enthusiasm”) and Editor Mark Livolsi, and more. The film also features an English Family Friendly Audio Track that earned the Dove Seal of Approval.

“Their Happy is Too Loud”