Few stories in American history have such a strange dynamic of awareness and ignorance, and that fact alone gives Hatfields & McCoys the potential to set records for a mini-series that focuses on historic fact (as best they’re known). While virtually everyone knows about the dueling families, not many are truly familiar with all the details, or the seriousness of the feud’s escalation.

Beginning May 28th, History brings you a three-part event that takes you through the entire feud, from a time when the two patriarchs were friends, all the way to the U.S. Supreme Court’s intervention in the hostilities which had brought West Virginia and Kentucky to the brink of their own war.

As you might imagine (or at least, hope), being that the show is airing on History, the strength of the series comes from its commitment to accuracy. It’s hard to find fault with any aspect of the production, but it all comes together, and actually delivers, by virtue of the lengths it goes to in serving the real events.

It all kicks off with the heads of the two families serving together in the Civil War. After a particularly gruesome battle that leaves both of them lucky to be alive, “Devil” Anse Hatfield (Kevin Costner) decides that enough is enough. Not only has he seen enough of war, he isn’t convinced that he has to wait (and probably die) for the right people to admit that the war is obviously over.

Randall McCoy (Bill Paxton) is there as Anse deserts, and when he finally returns home, it burns him up that Anse has been home securing his family a great deal of profit, while he spent his time in a Union prison. Anse would like to make things right, but Randall has a chip on his shoulder that won’t go away. Events, both major and relatively minor, conspire to set the two families further at odds, including the celebrated fact that the point of no return involved a stolen pig.

Things escalate between the clans, a Hatfield falls in love with a McCoy, tensions boil, and eventually it’s a bloodbath. As I say, the plot, with very little deviation, is straight from the history book. That fact can become somewhat deceptive as these events play out, especially as they escalate more and more, because it is delivered so well here that it may be hard to imagine that the screenwriters haven’t manufactured most of it out of whole cloth. 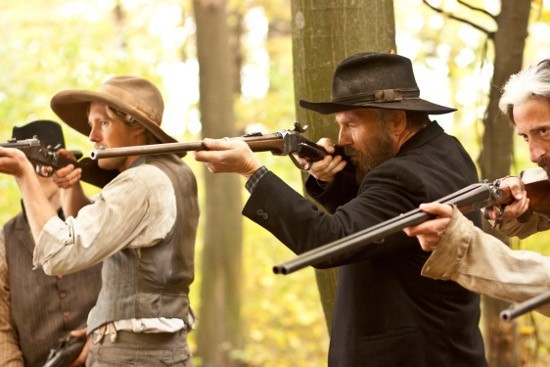 That may be a confusing statement, but with a few wonderful exceptions, audiences have largely been forced to choose between something that works as a great film (or mini-series), and something that sticks to the facts. The further we move toward what seem like bizarre events, or include such cliche elements as a Romeo and Juliet arc, the more likely it is that we’re in “inspired by” territory.

Best of all, that dedication to honesty carries over to the dialogue, and motivations driving the characters. Here we have to split the praise, as each character is given the potential depth to develop into rich personalities (which is itself amazing considering how many we have in front of us), and that potential is actually realized by a somewhat surprisingly talented ensemble. It probably isn’t a great surprise that Kevin Costner is able to manage a world-weary veteran struggling to reign in his own clan while protecting them. It shouldn’t even be news that Bill Paxton can deliver a multi-faceted, if fairly crazy, patriarch with too much God and hate in his head, and not quite enough sense. Other recognizable names also give the strong performances we’d expect, including solid turns by Powers Booth, Tom Berenger, Mare Winningham, and Jena Malone.

Where the possibilities really come to fruition is in the unexpectedly able performances that complete the dynamic. Matt Barr and Sarah Parish, as Johnse Hatfield and Levicy Hatfield, particularly stand out, and a list of those that serve as examples of giving some meaning to the idea of “supporting actors” would include the entire cast. Boyd Holbrook‘s Cap Hatfield is brilliant, and Ronan Vibert tackles a particularly difficult role as Perry Cline, an attorney and cousin to the McCoy’s who enters the story by trying to swindle Devil Anse out of logging rights. 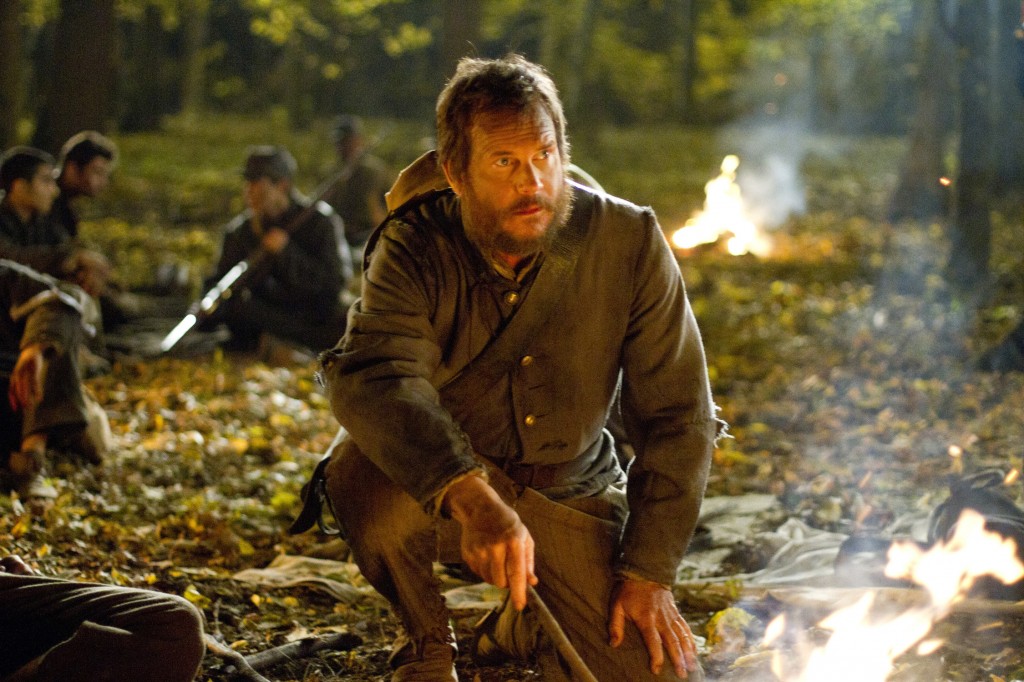 Those who aren’t fans of the niche that is the recreation of historic events may raise their eyebrows (and noses) at the suggestion that this delivers so well, and for any audience, but Hatfields & McCoys spins drama and tension as well as anything. It’s a combination of feud and family that relays everything that is real about the best fiction, and proves once again that there are some things you just can’t make up.

To say that Hatfields & McCoys is captivating entertainment seems at once too little praise, and somehow an unworthy judgment given its effort, but it’s an assessment that is hard to avoid. It pulls you in, and while firmly in a certain genre, it leaves that realm behind, delivering as a provocative, passionate film in its own right. Tightly written, solidly directed, and performed better than you’re likely able to believe, this is a historical drama that you’ll lose yourself in. Don’t miss it, and earmark your money for the DVD release now.

Below check out some very cool clips, including those of a behind-the-scenes variety, a picture gallery, and a rundown of all the family members so you can have it handy as you watch. As much as the film introduces them very well, there are a lot of people to keep track of.

It’s the true American story of a legendary family feud – one that spanned decades and nearly launched a war between Kentucky and West Virginia. HATFIELDS & McCOYS, a new threepart, six-hour scripted miniseries, showcases an all-star cast led by Academy® Award winner Kevin Costner and Golden Globe® nominee Bill Paxton starring as Devil Anse Hatfield and Randall McCoy, respectively. The mini series premieres on May 28, 29 and 30, at 9 p.m. on HISTORY®.

Devil Anse Hatfield (Kevin Costner) – The Hatfield patriarch. Devil Anse is devoted to his family and wife Levicy, and a stern but dedicated father to Johnse, William “Cap” Hatfield, and eleven other children. A natural leader, Devil Anse becomes a local entrepreneur with a prosperous logging enterprise.

Levicy Hatfield (Sarah Parish) – Wife of Devil Anse Hatfield and his closest, most trusted confidant, Levicy is the mother of Johnse, Cap, and their eleven other children.

Wall Hatfield (Powers Boothe) – The oldest of the four Hatfield brothers, Wall is a dignified West Virginia judge with a trenchant, cutting manner. He tries to stay out of the feud but, despite being the family’s sagest advisor, soon gets caught up in the violence.

Jim Vance (Tom Berenger) – The uncle of Devil Anse, Jim is a ruthless vindictive man with a nearpsychotic penchant for brutality.

William “Cap” Hatfield (Boyd Holbrook) – Johnse’s younger brother, Cap is badly injured in a logging accident; a splinter ruins his eye and leaves it cloudy for life. Touchy when insulted, Cap proves to be the best rifle shot of the family, and is able to kill from a considerable distance with his good eye.

Cotton Top Mounts (Noel Fisher) – The illegitimate son of Ellison Hatfield, Cotton Top is simpleminded and feels important when trusted with even the slightest responsibility.

Good ‘Lias Hatfield (Greg Patmore) – One of Devil Anse’s older brothers, he is a sly, bearded man with a happy demeanor. A musician, his purchase of a fiddle from Tolbert McCoy becomes the impetus for a fight between the families that has catastrophic consequences.

Ellison Hatfield (Damian O’Hare) – Devil Anse’s youngest brother, Ellison is large and powerful and functions as a family peacemaker until struck by tragedy.

Floyd Hatfield (Lloyd Hutchinson) – Cousin to Devil Anse, Floyd is accused by Randall McCoy of having stolen a pig. The subsequent trial intensifies the bad blood between the two families and triggers a new wave of violence in the burgeoning feud.

Bill Staton (Michael Greco) – A logger who works for the Hatfield family, Bill becomes a key witness during the court trial between Randall McCoy and Floyd Hatfield.

Randall McCoy (Bill Paxton) – The McCoy family patriarch. He is dedicated to wife Sally and doting father of Roseanna, Tolbert, Phamer, Alifair, Calvin, Jim and Bud – but saddened by not being able to provide for them as he’d like. Traumatized and imprisoned during the Civil War, Randall is a good man, moral, religious, believes in the law – but his rigid code of honor, self-righteousness, and bitterness eventually destroy him.

Sally McCoy (Mare Winningham) – Sally is the loving wife of Randall McCoy and mother of Roseanna, Tolbert, Phamer, Alifair, Calvin, Jim, Bud, and several more children. Emotionally complex with ominous premonitions, Sally is the undisputed matriarch of the McCoy family – and one of the most tragically affected by the feud’s violence.

Roseanna McCoy (Lindsay Pulsipher) – Roseanna is the stunningly beautiful daughter of Randall and Sally McCoy. She is Randall’s favorite child. Roseanna attracts the romantic attention of Johnse Hatfield, a romance that divides both families even further.

Nancy McCoy (Jena Malone) – Roseanna’s cousin, Nancy is the daughter of Randall’s brother Harmon. Nancy is just as beautiful as Roseanna, but more predatory, ruthless and sexual. There is a rivalry between the two cousins that adds considerable fuel to the feud.

Selkirk McCoy (Joe Absolom) – Randall and Sally McCoy’s nephew, Selkirk is regarded by his family as a traitor because he is employed at the Hatfield logging mill and married to a Hatfield.

Parris McCoy (Ben Cartwright) – The brother of Squirrel Huntin’ Sam, Parris is one of the prejudiced jurors at the trial of Floyd Hatfield for pig theft.

Squirrel-Huntin’ Sam McCoy (Jack Laskey) – An inseparable team, Sam and his brother Parris are instigators for the McCoy cause and help push the feud to a new level.

Perry Cline (Ronan Vibert) – A cousin of Randall McCoy’s, Perry is a politically-savvy attorney who represents the McCoy family in their many dealings with the law. In love with Roseanna, Perry pushes and manipulates Randall for his own personal gain.

Harmon McCoy (Chad Huggins) – Randall McCoy’s younger brother. Harmon goes against most locals and many of his own family (including Randall) by joining the Union army during the Civil War.

Bad Frank Phillips (Andrew Howard) – Bad Frank is a private detective/killer for hire with a grudge against the Hatfields. Smart, tough, and resolute, he is hired by the McCoys and deputized by the Kentucky governor to become a renowned, pitiless hunter of Hatfields.

Ransom Bray (Jilon Vanover) – Ransom wants to learn the law enforcement business and boldly states his desire to become the personal deputy of Bad Frank Phillips. Half-cop, half dry-gulcher, he becomes Bad Frank’s second in command, assisting in the merciless work of hunting and killing Hatfields.