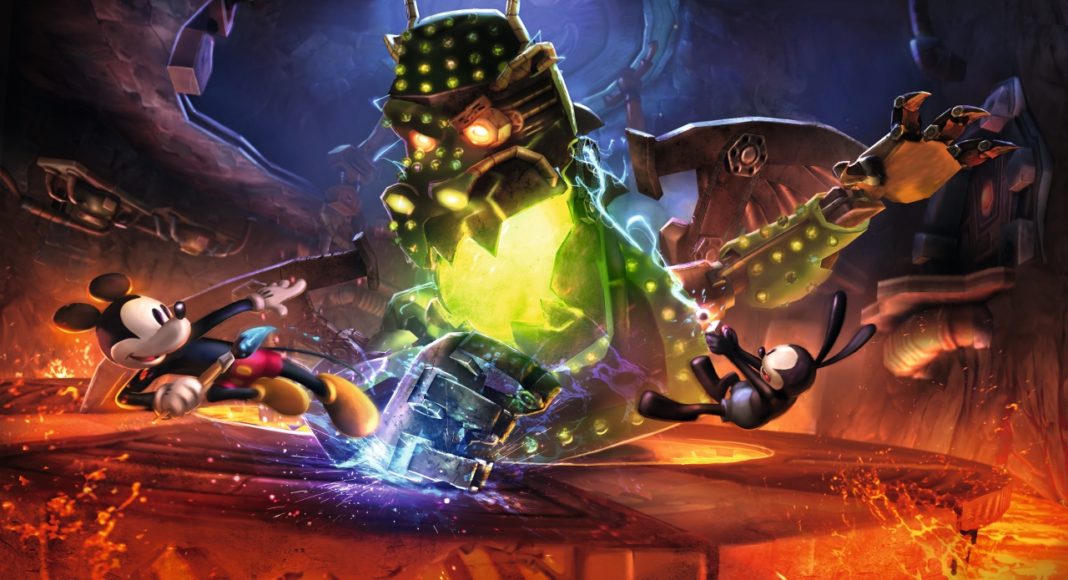 Disney Interactive has announced the launch date for Epic Mickey 2: The Power of Two, and you want to mark your calenders for November 18th. The sequel to the game that took the world by storm also has a great E3 trailer you can catch below, as well as a BTS trailer that’s worth a look.

It’s something of a surprise that I’m so taken by either of these games, but the first one was addictive, and just plain loads of fun. The new one looks like it’s going to take things up a couple of notches, and that’s pretty impressive.

This time around you’ll get Oswald the Lucky Rabbit as a true partner, and you’ll explore a full world bursting with forgotten Disney characters and theme park attractions.

Read the full press release below, and then take a look at the trailers.

DISNEY INTERACTIVE ANNOUNCES NOVEMBER 18, 2012 LAUNCH DATE FOR “DISNEY EPIC MICKEY 2: THE POWER OF TWO” AND SHOWCASES NEVER BEFORE SEEN AREAS OF THE GAME AT E3

Special Exhibit by D23: The Official Disney Fan Club to Display Treasured Artifacts From the Walt Disney Archives, Some on Public Display for the First Time Ever

Paint and thinner will once again alter the universe on November 18, 2012 as Disney Interactive announces the launch date for its highly-anticipated action adventure game “Disney Epic Mickey 2: The Power of Two” at the Electronic Entertainment Expo (E3 Expo). In celebration of the newly revealed launch date, industry luminary Warren Spector and Disney Interactive’s Junction Point are showcasing never-before-seen areas of “Disney Epic Mickey 2: The Power of Two” and an exclusive exhibit presented by D23: The Official Disney Fan Club at the Disney Interactive booth (South Hall #1001) at the E3 Expo will feature artifacts from the Walt Disney Archives that pay tribute to characters featured in the video game.

“Our fans have told us how eager they are for a sequel to ‘Disney Epic Mickey’ and I’m happy to be able to reveal the launch date for “Disney Epic Mickey 2: The Power of Two,” said Warren Spector, creative director and vice president, Junction Point. “I think players are going to be excited by the new areas of the game being revealed at E3 where they will need to determine who their friends really are as they team up Mickey Mouse and Oswald to restore balance in Wasteland.”

E3 Expo attendees will have the opportunity to experience “the power of two” as Mickey Mouse and Oswald join forces for the first time to overcome obstacles in a game level inspired by the classic 1937 Silly Symphonies cartoon, “The Old Mill.” Players will also engage in a heroic struggle to save Wasteland as they battle a giant animatronic blotworx dragon modeled after the Pete’s Dragon Float from “The Main Street Electrical Light Parade,” long a fan favorite at the Disney theme parks.

Additionally, attendees that come by the Disney Interactive booth will have an opportunity to browse an exclusive exhibit of artifacts from the Walt Disney Archives, some on public display for the first time ever, from Disney’s rich 80+ year history. From Oswald the Lucky Rabbit and Mickey Mouse, to Gremlin Gus and Clarabelle Cow, the exhibit will pay tribute to beloved characters featured in “Disney Epic Mickey 2: The Power of Two.”

“Disney Epic Mickey 2: The Power of Two” returns Mickey Mouse and Oswald the Lucky Rabbit to Wasteland, an alternate world filled with more than 80 years of forgotten Disney characters and theme park attractions. But for the first time, Mickey and Oswald will join forces as true partners – Mickey with the magical paint brush that allows him to wield paint and thinner, and Oswald with a powerful remote control that allows him to command electricity. This new co-op play further enhances the idea that “PlayStyle Matters” – a unique approach to gameplay pioneered by Warren Spector where players dynamically tackle different challenges in order to explore all possibilities and storylines, but with consequences for their chosen actions.