This week we took on Savages, and we didn’t exactly love it. The latest from Oliver Stone takes us on a strange journey, one that reveals far too much by way of what happens when a talented director gets lost in their delusions of grandeur. It’s a film that starts off wandering in some theory of “high art” and ends buried in cartoon hijinx.

You know there’s talent in there somewhere though, because much of the middle holds your interest.

There were so many problems that we couldn’t get to them all, but it ultimately came down to Stone, and the laughable ending to something that was hard to care about in the first place.

Oddly, perhaps, most of the acting was quite good, and though I couldn’t really get behind Salma Hayek‘s portrayal, Shane and I agreed that Taylor Kitsch was solid, and Benecio Del Toro and John Travolta had some great scenes.

We decided early on that this was going to have to be a “spoiler” show, and didn’t think we were going to get very far without talking about the ending to some degree (Shane decided he was going to spoil everything, just because the movie irritated so much that he had lost all respect for it), but in the end we didn’t get to the spoilers as quickly as we thought. Turns out, there was plenty wrong with it before you have to spoil it. 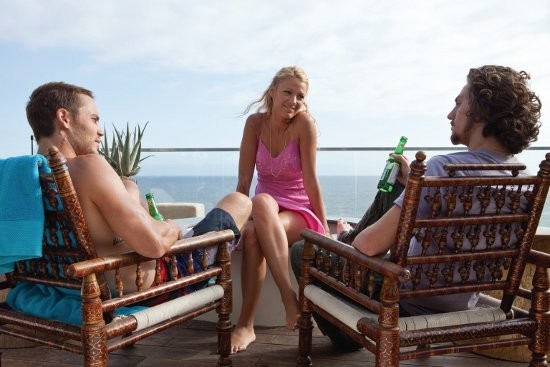 You should know what you’re getting into though, because about 40 minutes in we will give you the warning that you should tune out if you don’t want to know just about everything that happens.

Still, much as I am desperate for us to disagree by a wide margin on something, I think nothing has surprised either one of us more than agreeing exactly on the rating for this film.

Next week we’ll be bringing you The Dark Knight Rises on Sunday at 4:00pm est, and we’re going to expand the live show to 90 minutes.

Thanks for tuning in, and please show your support by following us on BlogTalkRadio.com, and rating us on iTunes.

If you’d like to sponsor the RU? Instant Reaction Review, drop us a line at marceastman@areyouscreening.com