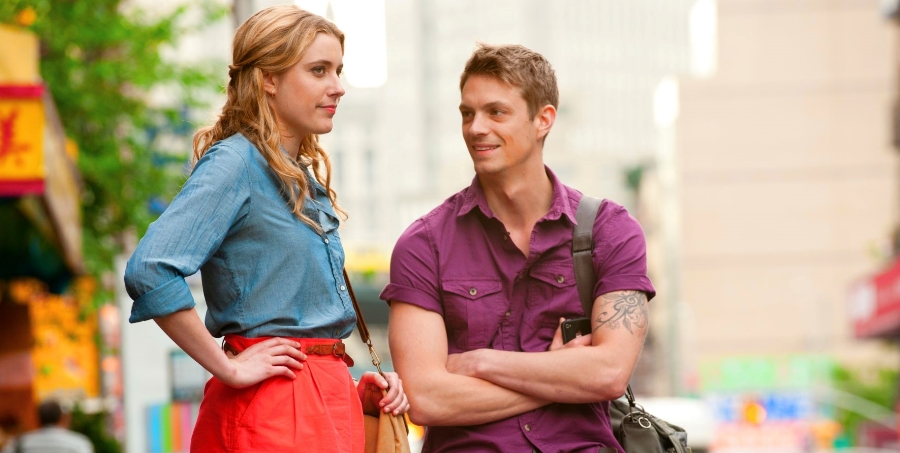 Lola Versus is a movie that’s been made countless times, and a story that has been told as often as any other, but we’ve rarely run into it so solidly constructed. Unlike most films, this is a story that doesn’t want its end, and has no use for it, except that at some point we have to stop talking. This is a story that is actually about the telling of it, and that’s something so rare, that most people haven’t had a real idea how to approach this story as a film.

The follow-up to Daryl Wein’s Breaking Upwards is yet another spin on generational angst, and the trials of dealing with love, friendship, loss, and generally the fact that other people exist, which ultimately gets in the way mostly… and is messy.

Greta Gerwig stars as Lola, a young woman trying to find her way through her 29th year, which isn’t going to be easy, because Saturn is rising (or something), which means her life is going to change. Her voice-over during the film’s opening has her responding to this idea and the understanding that things are always changing, and have to change, with the question, “But, what if you like your life the way it is.”

Her boyfriend quickly proposes, and we get to smirk at the possibilities of change, and “liking your life the way it is,” and as we run through the planning months leading to the big day, we’re introduced to Lola’s best friends, Alice (Zoe Lister Jones) and Henry (wonderfully managed by Hamish Linklater). We find them all coming together as, more or less, a snarky, hipster group that already feel familiar to us, but when the would-be groom (Joel Kinnaman) does a runner, Lola has to put herself back together, with varying amounts of help from her friends, and even said groom himself, and then we get to smirk again at life’s little plays with “changing.”

We follow Lola’s story through strange twists, heartache, misguided efforts, and embarrassing moments. In other movies this would all lead to the end we all know is coming… some positive outcome, Lola finds the better man, learns that it all worked out in the end… but Lola Versus is well-titled, and has less, and far more, at its heart than happy endings. Sure, when we get to the end, the easy view is to suspect that we’re in just as deep a cliche, but that’s only because we find ourselves forced to find an ending, whether there is one or not.

A special kind of victim of society (much as the film is perhaps a victim of its genre), Lola wanders through her life, and its decidedly rough circumstances, looking through a filter, and one that only lets her see herself in the mirror of other people. When she comes to what serves as her “bottom,” she starts to ask herself different questions, and then she meets someone new. The film is almost boring in the delivery of this point, which is why its brilliant.

It’s a film that could go wrong in countless ways, and, praise aside, still does in a few of them, but writer/director Wein at least knows enough about what he’s trying to say to throw out most of the norms and conventions most others would use. Even when you know what’s coming, it isn’t for the reason you assumed, and doesn’t rest on the simplicity. It becomes its own glowing report for the filmmaker, and I don’t think anyone else working today could have delivered what he was looking for as well as Greta Gerwig, in a role that previews the abilities necessary for TIFF darling Frances Ha.

The trick of the title is almost annoying in its “too clever by half” statement, but it does well to make you wonder what Lola is really up against. In the end there is a kind of zen to Lola’s story, and she smiles, not because a fortune cookie (or her exploits) led her to some epiphany, or she’s found happiness, or stumbled onto a magic answer, but because she at least knows now that there isn’t one to find, and it isn’t what she was ever looking for anyway.

The Blu-Ray release, though it looks fine enough, especially considering that this is not a blockbuster-budget film, is sorely lacking in special features, and this is just the sort of movie where you’d like a lot more of them. Those who take to this film are really going to fall for it, and are going to be wishing they had more in store for them with the purchase.

It has a couple of features in the “given” category, outtakes, deleted scenes, and beyond that you have some semi-interesting featurettes about Greta Gerwig and the filmmakers, but they all don’t add up to as much as you expect from looking at the back of the box. The only real sell is the commentary track with director Daryl Wein and Zoe Lister Jones. It’s a lot of fun, and anyone who even enjoys the film marginally will find this one of the better commentaries they’ve found in a while. Wein is insightful, has fun with the whole thing, and knows how to keep it interesting.