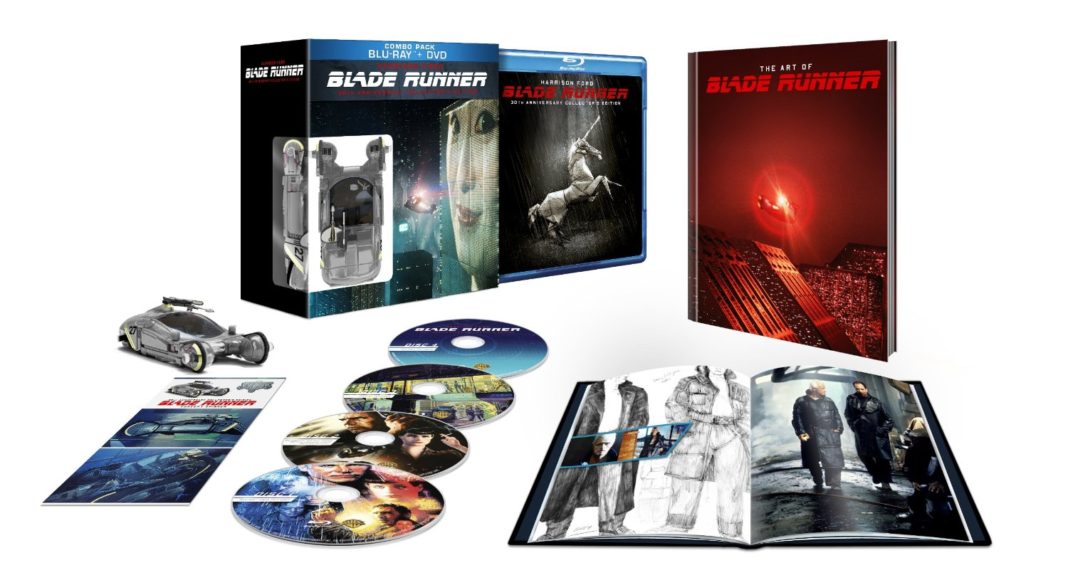 Blade Runner is one of those films that ran away with its own future (conveniently perhaps). With less than stunning reviews meeting its release, and more than a few audiences turned off by its strangely dark presentation, the film nevertheless managed to continue to convert fans over several years (amazingly this is the 30th Anniversary release), and now finds itself frequently referred to as the best sci-fi film ever.

The film not only pushed boundaries, and showed us the wild and complex imagination of Ridley Scott in his prime, but kicked off the movie world’s love affair with Phillip K. Dick. Though the screenplay diverges greatly from the source material (as do all films based on his work), the spirit of his story comes through far better than in most efforts.

Blade Runner, which holds up incredibly well today, weaves through surprising complexities, and showcases questions and odd turns enough for multiple viewings. Focusing on at least a passable examination of Dick’s ponderings on life, memory, and generally the rabbit hole we’re sprinting toward, the film takes on the struggle of replicants, created “beings” with memories implanted in them, who are used as slave labor. When a group of them escape, they have a few questions for their creator(s), and things soon get muddy when the questions start flying.

The film, and its history, should actually need no introduction (although looking back at critic reviews from its release is more fun than you’d think), and a release of this caliber probably doesn’t need a lot of sell either.

The four-disc release comes with a 72-page production art book which a lot of fans would pay for on its own. Often questionable bonuses, this one is something you’ll actually find worthwhile, even if only for some of the shots of the complex city background. Combining with this, for image fans, a bonus on one of the discs features an HD stills gallery with more than 1,000 archival images.

Adding to what some may find the “cutesy” side of the bonuses offered, you also get a Lenticular “action” image, and a spinner car. These are exactly as cool as you think they are, and while some fans may not care about them, the car is really pretty cool.

Beyond these, and into the “real” bonuses, the set is loaded, with bonuses spread out over the four discs. First off, you’ve got four cuts of the film, and fans have already been talking about the differences since 2007, when The Final Cut came on the scene. Each cut of the film also has an introduction by Ridley Scott.

Having all the cuts of the film is great, and honestly, adds a lot of value in itself, but if anyone is picking up this set, the real draw is the host of bonuses. Featurettes cover an impressive array of aspects of the film, and there are commentary tracks galore.

Perhaps best, depending on your bent, are three bonuses that focus on the author. A featurette compares the film with the original work, and its a nice addition to the experience for those who still haven’t read it, while another dives into the man himself. Finally, we have some interviews with him. Those who are at all familiar with him will appreciate these, and those who need an introduction may find themselves looking at all the films coming from his work in a new light.

On the other side of the special feature realm, we have a solid Making Of featurette, which is a lot more impressive than the standard issue installments most people may be used to. That’s possibly just a result of the myriad complexities involved with the production, which make this a lot more than just a showcase of the special effects work. Of course, we’ve also got featurettes on wardrobe and design, and many more.

For those who are looking for more information from these behind-the-scenes angles, there is a rare treat here in the form of commentary tracks by the art director and visual effects supervisors, as well as the screenwriters and producers, all of which take you through an entirely different journey with the film.

When releases like this (especially with a bold “X Anniversary Edition”) come out, there is often a kind of instant response that it seems like just another money grab effort, but this one delivers in several impressive ways. I haven’t even covered all of the bonuses available (see full list below), because there is simply too much to go into detail about. The real test is that this release not only adds legitimately to previous releases, but you can’t help but feel that now you really own this movie in any sense you care to imagine.

You’ve got plenty of the standard additions like deleted an alternate scenes, original promo spots and trailers, etc., but you also get a staggering number of bonuses, and ones that are obviously put together with the idea of a real appreciation of the film, as opposed to what we might knock out in order to make the list of bonuses look good.

Few films hold up as strongly, and fewer still get releases that make you glad you’re a fan. This is about to become the standard to which future mega-releases are compared, especially in the world of pushing out films 30 years after they hit.

Includes UltraViolet™ so you can enjoy the film on many different compatible devices.

MUST ENTER REDEMPTION CODE BY 10/23/2014 TO REDEEM ULTRAVIOLET OFFER. DOES NOT INCLUDE iTUNES FILE.

The commemorative gift set includes all 10+ hours of bonus content from the critically acclaimed Ultimate Collector’s Edition from 2007 plus a new, comprehensive photo gallery of newly discovered sketches from director Ridley Scott, photos from the set and more.

Blade Runner (Presented by Jerry Perenchio and Bud Yorkin; A Michael Deeley-Ridley Scott production) is one of the most important science-fiction movies of the 20th century. The film, starring Harrison Ford, has had immeasurable influence on society, and its futuristic depiction of a post-apocalyptic, dystopian world makes it perhaps more powerful and relevant today than when it was made. Produced by Michael Deeley and directed by Sir Ridley Scott (a three-time Best Director Oscar® nominee for Gladiator, Thelma & Louise and Black Hawk Down) Blade Runner, a Ladd Company release in association with Sir Run Run Shaw, has appeared on more ‘Top Five’ sci-fi lists than any other film.

In celebration of its 30th anniversary, Warner Home Video (WHV) will end the film’s moratorium with the debut of a beautiful new commemorative 4-Disc Blu-ray™ + DVD Combo Pack which also includes an Ultra Violet (UV) copy of The Final Cut feature. This comprehensive gift set edition includes The Final Cut version of the feature presented on both Blu-ray and DVD, as well as the other four versions: 1992 Director’s Cut, Domestic and International Theatrical versions, and the rare Workprint feature version previously only available in the 25th Anniversary

In Blade Runner, genetically manufactured beings called “replicants” are built to do dangerous and degrading work on Earth’s “Off-World colonies.” Physically identical to adult humans, yet much more powerful, a group of replicants hides in Los Angeles after a bloody mutiny. Heading the all-star cast, many in career-expanding roles, is Harrison Ford as Rick Deckard, a special police “blade runner” assigned to hunt down and kill the escapees. Also starring are Sean Young as Rachael, Deckard’s replicant lover; Edward James Olmos as Gaff, a mysterious fellow policeman; Daryl Hannah as Pris and Joanna Cassidy as Zhora, two beautiful yet murderous replicants; and Rutger Hauer as Roy Batty, the replicant leader who challenges Deckard’s ideas of what it is to be human.

Blade Runner was adapted from the novel “Do Androids Dream of Electric Sheep?” by acclaimed science-fiction author Philip K. Dick. Hollywood has since discovered this eclectic author in full force, and some of the films adapted from Dick’s works include Minority Report, A Scanner Darkly, Next, and Total Recall, among others, grossing millions of dollars worldwide. But it was Blade Runner that started it all. The film was nominated for 2 Academy Awards® — for Best Art Direction and Best Visual Effects. Oscar® – winning composer Vangelis (Music [Original Score], for Chariots of Fire, 1981) created the musical score.

• Introduction to the Final Cut by Director Ridley Scott

• Dangerous Days: The Making of documentary

• Featurette Sacrificial Sheep: The Novel vs. The Film

• All Our Variant Futures