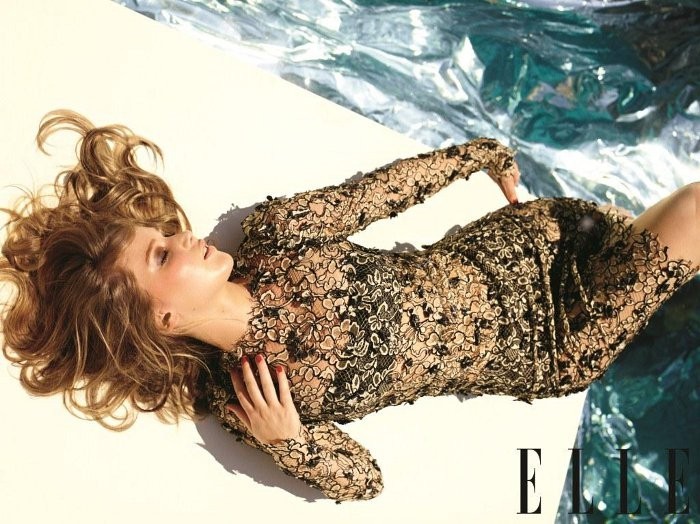 Jennifer Lawrence is clearly one of the biggest breakout stars of the last couple of years, and even before The Hunger Games she was making a big splash. The impressive actress is covering Elle magazine, which naturally includes the usual photo shoot and interview, and it’s an interesting piece.

On dieting for a role:

“I’m never going to starve myself for a part… I don’t want little girls to be like, ‘Oh, I want to look like Katniss, so I’m going to skip dinner. That’s something I was really conscious of during training, when you’re trying to get your body to look exactly right. I was trying to get my body to look fit and strong- not thin and underfed.”

On her relationship with British actor Nicholas Hoult :

“[My boyfriend] is honestly my best friend, and hopefully I’m his best friend too. He’s my favorite person to be around and makes me laugh harder than anybody…We can eat Cheetos and watch beach volleyball and we turn into two perverted Homer Simpsons, like, ‘Oh, she’s got a nice ass.’ I never thought we’d have such different opinions on asses.”

On saying what she’s thinking:

“I never know what’s going to come out of my mouth, and it’s horrible. I don’t find it positive in any way. When I get older, I’ll be more mature and poised. And I’ll have control over my mouth. One day, I’m going to grow up…When we leave, I’m going to have a knot in my stomach. I’m going to be like, ‘Oh, did I say something wrong? I’m going to get in trouble!’”

On being in control:

“Acting, films, scripts, is literally the only thing I’m 100 percent confident in. I know what I’m doing. I just understand it, and I love it. When I’m on set, that’s when I feel the most at home and in control.”

“Ten million dollars and I’m still living in my parents’ condo…I’ve always lived in a tiny rat-infested apartment in New York, or a little condo in L.A., or a normal house in Kentucky. I think it would be very bizarre to live in a big mansion by myself.”