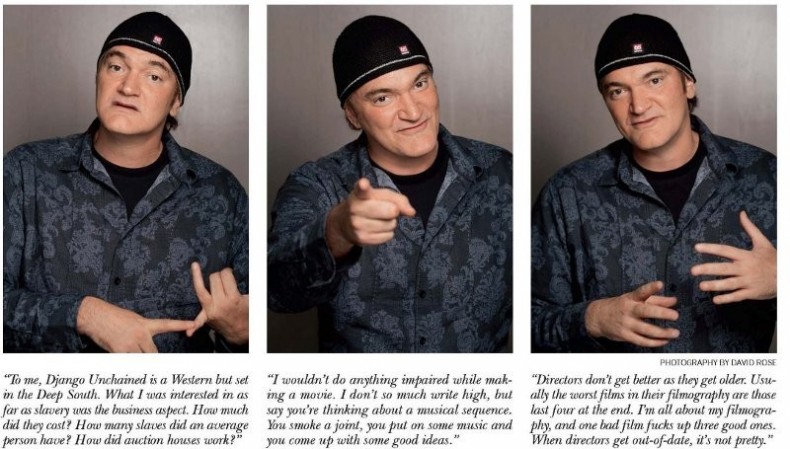 Few directors stand out as guaranteeing an interesting interview more than Quentin Tarantino, and he’s featured in the upcoming issue of Playboy, with topics covering just about everything you can imagine, from his latest film, Django Unchained, to hanging up his hat as a director, to his own celebrity status.

Never one to shy away from a topic or position, this is an interview to catch, even if it’s only to find out his thoughts on why his films go where they do, and what he thinks of as his ideal wife. Catch a sampling below.

“I just don’t want to be an old-man filmmaker. I want to stop at a certain point. Directors don’t get better as they get older. Usually the worst films in their filmography are those last four at the end. I am all about my filmography, and one bad film f*cks up three good ones … When directors get out-of-date, it’s not pretty,” says filmmaker Quentin Tarantino. Playboy’s November Interview sits down with the maverick director to talk about Django Unchained, facing 50 and why he’s no longer a Hollywood outsider (issue on newsstands and i.Playboy.com Tuesday, November 20, with the complete interview available at www.playboy.com/quentintarantino)

On quitting making movies while he’s ahead:

I’m on a journey that needs to have an end and not be about me trying to get another job. I want this artistic journey to have a climax. I want to work toward something. You stop when you stop, but in a fanciful world, 10 movies in my filmography would be nice. I’ve made seven. If I have a change of heart, if I come up with a new story, I could come back. But if I stop at 10, that would be okay as an artistic statement.

On originally seeking Will Smith to play the lead in Django Unchained:

We spent quite a few hours together over a weekend when he was in New York doing Men in Black 3. …I think half the process was an excuse for us to hang out and spend time with one another. …It just wasn’t 100 percent right, and we didn’t have time to try to make it that way.

On why he ultimately cast Jamie Foxx in the role:

He was the cowboy…Forget the fact that he has his own horse—and that is actually his horse in the movie. He’s from Texas; he understands. …He understood what it’s like to be thought of as an ‘other.’

On Leonardo DiCaprio’s role as the villain, Calvin Candie:

I hated Candie, and I normally like my villains no matter how bad they are. …what I’m always trying to do…is get you to kind of like these guys, despite on-screen evidence that you shouldn’t. Despite the things they do and say and despite their agenda. I also like making people laugh at f*cked-up sh*t.