The “town” Apps are legion, and another newcomer hopes to leverage the popularity of their Facebook version (as most do) to become the new must-play iOS game. Car Town Streets, from Cie Games, who brought you Car Town on Facebook, is similar in many respects to the standards of the genre, except that everything is car focused.

Build shops, eateries, and other various plots that take up space, seek out and “develop” cars to populate your mini-world, then send them to work. Once you’ve got your “crew” assembled, send them to the races to win trophies, and defend those trophies from other players.

I have to admit that these are rarely games that hold my interest long. There’s an initial fun to these types of games, but at some point they become bogged down in my experience. You open the App, tap a couple of things, and then you have to wait several hours before anything else can happen. There’s some algorithm of popularity at play that most creators of these games seem to be striving for, and it is one that heavily favors getting people to open the App five times a day, even if the total time they spend with it open is five minutes.

That seems (on fairly limited initial play in this case) to be a trend Car Town Streets wants to move away from, at least to some degree. You do still run into the same “wait 10 hours for my new car to spawn (or whatever it’s doing)” theory, but it looks as though once you get through the early stages things pick up a bit. Plus, there’s a greater diversity among the things you can do with the racing option. If you would like to consider some car parts for your car then you can Compare Parts online.

Of course, depending on your particular tastes, trying to collect rare cars is miles cooler than harvesting another batch of carrots, so it has that going for it as well. Having all those cool cars is also a great excuse to put some insurance on them. There are plenty of reliable vehicle insurance companies with one of them being Money Expert which offer a great cover for vans. Although this is only a game, this is an essential aspect for you vehicle in reality so you’re not liable for the damage! Even if the game hasn’t gone into depth about checking out TheGeneral Quote, this doesn’t mean you shouldn’t take your time to do a bit of research. The safety of yourself and your family should be your priority, so in this case, finding the right insurance policy for your car could make such a difference.

Still, these time-killers have never been my thing, which leaves me in the overwhelming minority, and I imagine there will come a point that I just can’t bring myself to justify opening it anymore. For know, it’s a bit of fun, and with certain additional pieces thrown in (like Mattel and Ghostbusters tie-ins), this one may actually be a bit of a step forward when it comes to considering why fans of such games would decide they need yet another one.

Check out all the info below, and consider this a very early review. There just hasn’t been time to find out what’s needed, because the real test is whether or not you’ll get hooked. 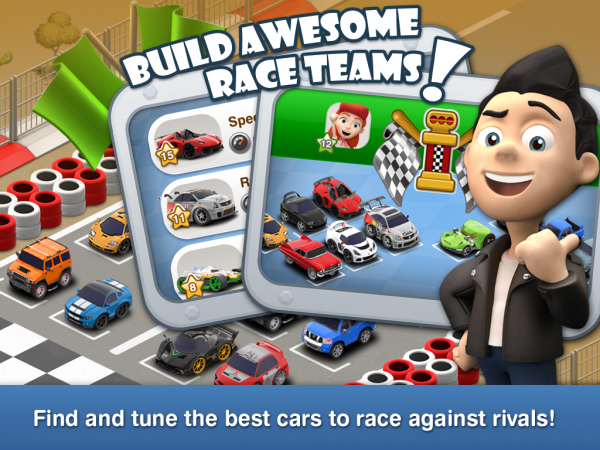 Cie Games, a successful social game developer and creator of the leading automotive-based Facebook game, Car Town, today announced the global launch of Car Town Streets, now available for free on the App Store for iPhone, iPod touch, and iPad. In Car Town Streets, players can find, build and cruise with all their favorite cars in a fully customizable town. The game is built on the legacy of Cie Games’ flagship title, Car Town, which has attracted more than 46 million players and is the first Facebook game built around real-world brands with more than 35 partners.

As part of launch, new partners and the world’s most recognizable brands including Hot Wheels™ from Mattel and Sony’s “Ghostbusters” will be featured in Car Town Streets. Highlights include:

Hot Wheels™:Live out your daredevil thrills by building an iconic Hot Wheels™ track. Perform cool stunts and collect all four vehicles including a Hot Wheels™ Monster Truck, Twin Mill™, Bad to the Blade™, and the Bone Shaker™!

Ghostbusters: Feeling like there’s something strange in the neighborhood? Who you gonna call? Ghostbusters! Take a ride in the iconic Ecto-1 vehicle and visit the Ghostbusters headquarters.

“We are excited to partner with Cie Games, known for pioneering authentic in-game brand integrations, to offer players a chance to interact and engage with Ghostbusters-branded content across their mobile and social games,” said Mark Caplan, vice president of consumer products, Sony Pictures Entertainment. “To start, fans will have the opportunity to build the Ghostbusters fire station and own a virtual Ecto-1 in Car Town Streets.”

“What is core to Nitto Tire is innovation in everything that we do and that includes marketing,” said Tomo Mizutani, president of Nitto Tire USA. “Being the first tire company involved in social gaming and now, mobile gaming in the way that we’ve done with Car Town is just part of our DNA: being on the leading edge. We know that consumer engagement is shifting to mobile devices and particularly games, so partnering with Cie Games on Car Town Streets is not only innovative, it’s smart business.”

Car Town Streets is a brand new game designed specifically for mobile gamers and offers a different type of game play mechanic from its Facebook predecessor. Players can join Roxy in her quest to restore the town to its former glory when cars ruled the streets. As players find, build, and race with all their favorite cars, new locations and missions will unlock.

Other game features include:

“2012 has been an incredible year as the Car Town franchise expands and focuses on new mobile platforms, launches on international social networks, and crosses over to consumer products with a toy line,” said Dennis Suggs, president and CEO, Cie Games. “We are proud to collaborate with Sony Pictures Entertainment, Mattel and Nitto Tire for the launch of our first iOS game. We are thrilled to debut Car Town Streets to our millions of players and offer them the ability to take the game wherever they go.”