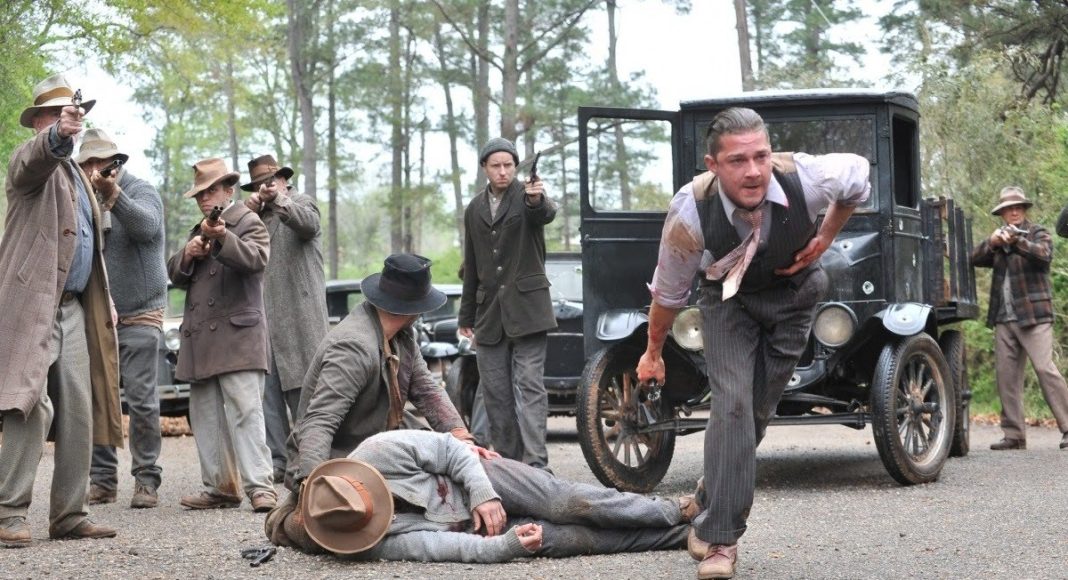 Lawless, for all its flaws, delivers a very entertaining trip through a particular landmark of time and space. Based on true events, and with John Hillcoat at the helm, the film gives us a glimpse at life during Prohibition-era Virginia, and the strange circumstances the nation’s dry time created in many parts of the country.

The film ultimately suffers from what seems to be a certain odd spin on having delusions of grandeur by screenwriter Nick Cave, who isn’t satisfied to simply tell the story, but has to push many elements beyond the point of interest and what is legitimately believable and watchable. Still, that opening should be read too harshly, because the problems I had with the film didn’t detract overly from the general enjoyment to be found. I suspect most will have a good time with this one, and even the film doesn’t ultimately impress, it’s worthwhile for the historical portrayal it delivers.

Beyond that, Tom Hardy‘s performance is worth watching even for those who may find themselves overtly distances by some of the film’s weaker efforts. The movie centers around the Bondurant family, their moonshine operation, and the increasingly convoluted situation they find themselves in. If it isn’t trouble with the people receiving the shine, or the odd redneck passerby, it’s the new efforts of outside law enforcement who try to squeeze a cut out of the Bondurant clan.

Eventually, there seems to be trouble from every direction, and few alternatives to relieve the pressure. Focusing, in some sense, on the youngest Bondurant, Jack (Shia LeBeouf), our entry into the realm stems from Jack’s irritation at his brother’s, Forrest (Tom Hardy), refusal to let more responsibility flow down the food chain. Thus, we’re going to see angst-filled Jack try to prove himself, and as we can easily guess, that’s rarely going to lead to successful outcomes. Toss in the mix of the Bondurant’s life the fact that outside law enforcement has come down from Chicago (or whatever), and is looking to take a serious cut from the simpleton yokels, and things are going to get complicated. 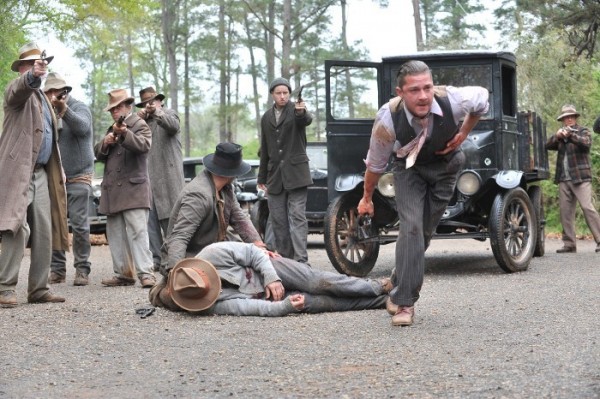 It’s an interesting look, and a tale largely told well. The problems come from the overexerted text which plays at a certain demand for subtext where there is none. All love plays drag on with a sideways glance at the audience, and in some cases play out in borderline ludicrous fashion, all in the name of some truly winning point we’re trying to showcase, which isn’t there. Meanwhile, Guy Pearce‘s Charlie Rakes, the “muscle” of the outside government forces come to take over, is made laughably useless by way of the notion that all people who oppose the protagonist must twirl their mustache, and be completely insane.

This, by the way, despite Pearce’s best effort and humanizing the cardboard character. Much as like Pearce, and the talented actor can’t catch a break in the roles he’s getting, he’s no match for the body he’s inhabiting here. Overall, it’s above-average, and it increases in quality the more you can just write off some of the lapses in judgment.

Check out our podcast review of Lawless here.

We’re in the territory of one of those rare cases in which the home release (especially Blu-Ray) manages to surpass the quality of the film itself. The Blu-Ray looks great for one thing, and though it may be a bit surprising to some, this is a great film to show off the HD abilities. There are not only a lot of great views available in the sense of what comes to mind when thinking about great HD shots, but there are also a lot of darker moments that take advantage of the ability to deliver clarity in the more easily obscured part of the spectrum. Beyond that, the bonuses are a great mix.

You’ve got a commentary track with the director and the author of the original biographical work, Matt Bondurant. This is one of the better commentary tracks you’re going to run into, and whether it is the discussion about getting the book to screen, or the additional Bondurant stories that come out, this is entertaining enough that making it through the entire thing is no chore at all. For me, the discussions that we get into whenever we aren’t actually looking at Bondurants on the screen are by far the best. There’s a bit too much that the integral characters open up. It’s still good stuff, but when we move away into the background elements and supporting characters, it’s really fun.

You’ve also got three featurettes. One is really a Making Of effort partially disguised as something else, but it’s actually very well done, and shows off, in my opinion, more interesting sides of the creative process than most. The other two are background featurettes. One shows the differences in the location from then to now, and is done better than you’d guess, though it isn’t very long.

The other is a kind of backstory compilation from the Bondurant author, which tells the story of the story… sort of. Fans of the film will love all of these. Finally, there’s a music video, and a couple of deleted scenes. Overall, a great release.

Below check out more info from the press release, and be sure to enter to win a copy of the Blu-Ray.

LAWLESS, which was nominated for an illustrious Palme d’Or at the 2012 Cannes International Film Festival, also stars Jason Clarke (Texas Killing Fields, the upcoming The Great Gatsby) and Dane DeHaan (Chronicle, The Place Beyond the Pines).

The Hollywood Reporter called LAWLESS “A gritty and suspenseful bootlegger tale.” Added film critic, Richard Roeper, in his Reelz Channel review, LAWLESS is “A hell of an entertaining movie, I give it an ‘A’!” Wrote Paste magazine film critic, Tyler Chase, “Lawless blends stylish originality with genre standards into a mixture as potent and explosive as Virginia moonshine.”

They were brothers who became outlaws, and outlaws who became heroes… The three Bondurant boys (Shia LaBeouf, Tom Hardy, Jason Clarke), along with their sultry new hire (Jessica Chastain), command the most lucrative bootlegging operation in Franklin County, Virginia. The locals consider them “indestructible.” But the law — in the form of a corrupt special deputy (Guy Pearce) — wants a cut of their action, at any cost. When youngest brother Jack (LaBeouf) gets a taste of power with a deadly gangster (Gary Oldman), the whole business blows sky high. Based on the astonishing true story, the Bondurant brotherhood is the stuff of legend.

The LAWLESS Blu-ray™ Combo Pack and DVD special features include an audio commentary with Director John Hillcoat and Author Matt Bondurant; two featurettes: “The True Story of the Wettest County In The World” and “Franklin County, VA: Then and Now”; Willie Nelson’s “Midnight Run” music video; and deleted scenes.

Learn more about LAWLESS at: http://lawless-film.com/