The latest DLC for Mass Effect 3, Citadel, is quite the unique creature. A layered list of dichotomies – it adds quite a lot of content, but doesn’t seem to “get you much,” and is somewhere in the realm of a big thank you package from the game’s creators, but costs more than it should.

The story is that Shepard is ordered to take shore leave, and this gives us the chance to explore a new section of the Citadel. With a new apartment, a casino, and an arcade, we’re set up for a more relaxed bit of wandering around, away from the nagging pressures of the destruction of all life in the galaxy.

Of course, Shepard is around, so nothing is going to be that simple. At least, most of it can’t be that simple. We’ve hardly gotten settled into the idea of taking a break from war when the shooting starts, and now we find ourselves with a new threat. Someone is specifically targeting Shepard, and figuring out what’s going on is going to take some work.

The actual “mission” involved in Citadel offers up some new dynamics, and a fair amount of story, but in the end it somehow doesn’t feel like the whole quite measures up to the sum of the parts. There are unique moments when Shepard is forced into a “sneaky” role when infiltrating a casino during a party being held there, and there are points during the “battle play” runs where the entire crew gets to join in… sort of, both of which make you feel like there’s some serious addition for your money.

You also get a new (and outside of this DLC utterly useless) weapon, and some new Mods for your weapons, but at the end of the day they don’t quite add up to a lot. 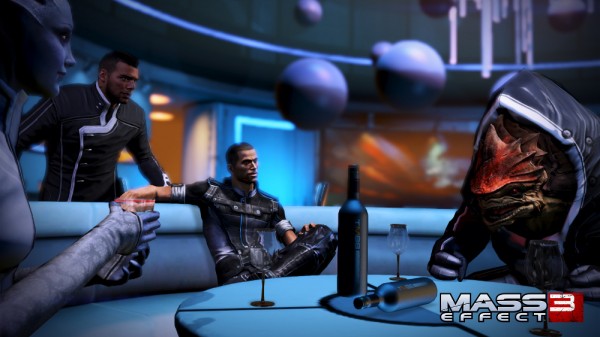 The meat of the DLC is really all of the downtime stuff, even when that actually includes post-mission resolution. This largely involves throwing a party. You get a lot of the “character” missions, which are very similar to those we’re already used to from the Citadel. It’s the same basic idea as when you received previous emails from the crew to “meet for a drink the next time we’re on Citadel,” or whatever. You split with some “Invite up” points, depending on which character it is, and you run through the little story arc that just serves as a little background snippet. They’re interesting, and it’s a kind of fan thank you, as I mentioned, but that’s all you get out of them.

It all comes together for a party you throw, which has a lot of options, some of which seem a bit strange. Assuming you’re playing through from an import, there are a variety of other characters that might be available to you. If not, well, they’re probably dead. You get the option to have a quiet party, or a wild one, or a certain combination. I don’t know how much difference it makes to anything, but I suppose you at least get to have what you want. You also, I think curiously, have the option to invite characters. A few are automatically added to the guest list, but if you’re of a mind to snub certain people, you can.

Mind you, all of this goes down with certain points that vary depending on decisions you’ve made in the past, such as who your love interest might be.

The whole thing comes at you with a definite air of humor (unless you’re seriously Renegade, which might play out differently). Aspects of the game are self-referential, and with a tone of poking fun, like the squad selection which comes into play in a more dynamic way, moving from one part of Citadel to another, as opposed to having a landing party. Characters will be sad they weren’t chosen, are chime in as wanting to go, etc.

It’s actually a fun DLC to run through, and it has some cool gimmicks built into it, like the combat simulator that gives you the chance to fight with characters from the past, but it’s hard to say that it’s the sort of stuff you’ll actually go back to. Which means that once you run through it, you’ve got a massive download on your XBOX drive, and not all that much to show for it. And, though you do get a bit of a bump to your strategic readiness, it isn’t much. 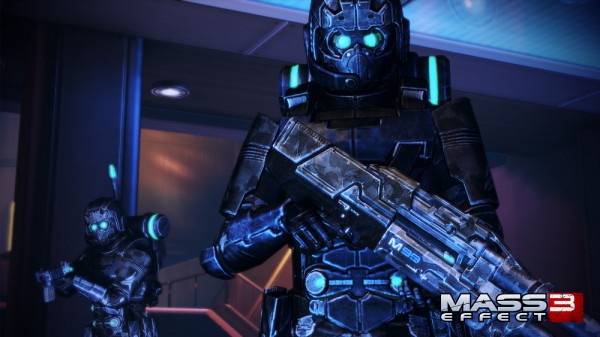 This all probably sounds very negative, but that isn’t the final result. It’s fun, and certainly of interest to anyone who really considers themselves a fan. It’s just that this is a DLC that feels odd. It’s more of an entertainment add-on than a “game” add-on, and if you know that’s what you’re getting, it probably won’t bother you. This late in the game, you’d think you would get more if we’re bothering with more DLC at all. Frankly, you’d expect something that would cut the multi-player strings to galactic readiness, just by virtue of the chatter surrounding the concept.

Embark on one last adventure with Commander Shepard and crew and rejoin the Alliance when Mass Effect™ 3: Citadel launches today. This emotionally driven piece of single player DLC expands on the events of Mass Effect 3 by inviting players to return to the capital of the Citadel Council in an effort to eliminate a startling threat. This new content will also feature Commander Shepard’s long-time friends and romance interests from the entire Mass Effect trilogy, as Mass Effect 3: Citadel offers one more chance for fans to reconnect with their favorite characters and even rekindle past romances.

With the trilogy arc coming to an end, BioWare will be participating in a special panel at PAX East entitled “The Mass Effect Trilogy – A Retrospective.” Fans can join Executive Producer Casey Hudson, Lead Designer Preston Watamaniuk, Lead Cinematics Director Parrish Ley, Writer John Dobmrow and Level Designer Dusty Everman as they relive some of the most memorable public and private moments in the creation of the Mass Effect trilogy. The panel will be at the PAX East Main Stage on Saturday, March 23 at 2:00PM EST and will be moderated by SpikeTV’s Geoff Keighley.

In addition to new story content, Mass Effect 3: Citadel will also give players the opportunity to use squad members from the entire Mass Effect series in a brand-new training facility on the Citadel. The Armax Combat Arena offers ten scenarios and will challenge players by dropping them in the middle of battle to fight off wave-after-wave of enemy forces. When the adventure is over, players can blow off some steam by trying their luck at the Citadel’s Silver Coast Casino or discover and furnish Commander Shepard’s living quarters on the station.