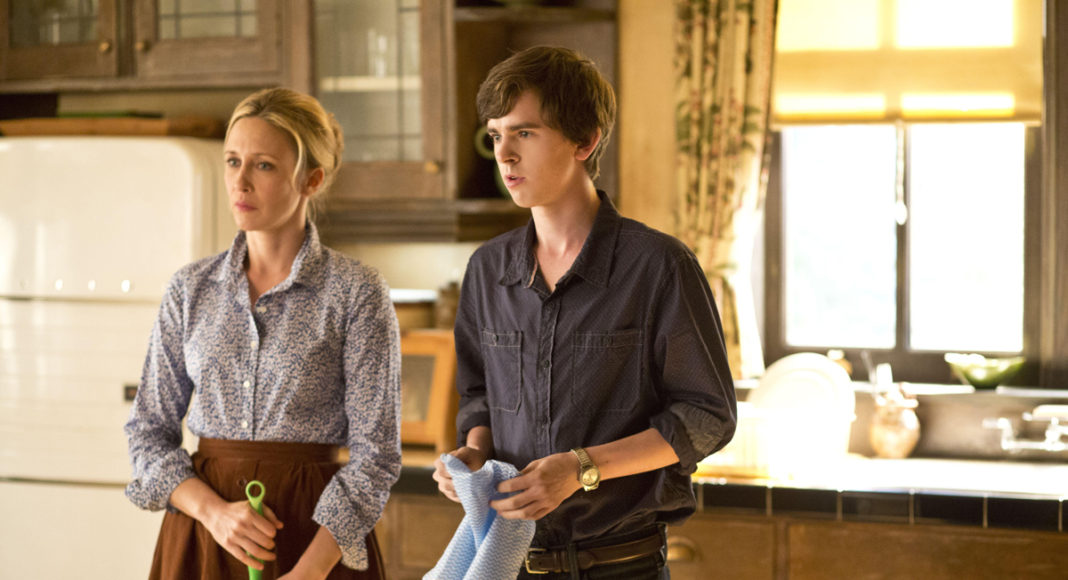 On Monday, March 18th, A&E is taking you back to where it all began with Bates Motel. I have to tell you, because I can’t get this idea to stop flashing in my mind, this is not at all what I would have predicted for either Vera Farmiga or Freddie Highmore. I’m a fan of both them, and looking through a list that includes – Up in the Air, Higher Ground, Source Code, Charlie and the Chocolate Factory, The Spiderwick Chronicles, and The Art of Getting By – does not lend itself to the idea that the natural progression of your CV is going to include a supremely raw and gritty psychopath story.

As you can imagine (and certainly one of the key tune-in draws), since you know where we are ending up, the teen years are probably going to be pretty rough for Norman Bates. Not only do we suspect he’s going to have a hard time of life generally, but you have to be off a mind that perhaps Mother is not all there… you know, when she’s alive.

We’re coming into the story about six months after Norman loses his father (see first six-minutes preview below), and Norman and his Mother, Norma (uhh… odd much?), have moved to a new town, and bought a motel. Very early on, we’re already laying the foundation for Mother’s domineering ways, not to mention the fact that she’s a bit of a loon. Norman didn’t want to move here, and he certainly didn’t expect to help run a motel. He didn’t want to move the other eight times he’s recently switched scenery either, but what better way to keep a stranglehold on your son’s attention? 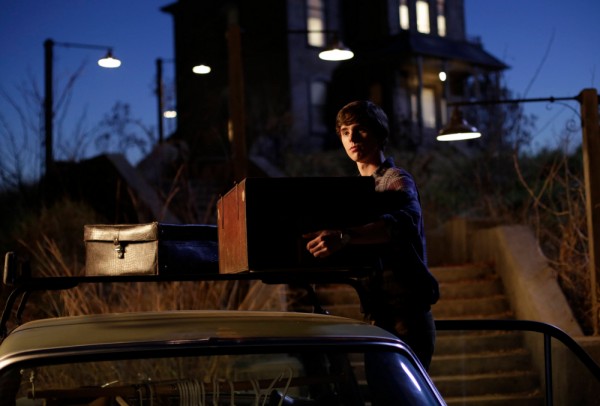 The show sets up a rich plate going in, and it has more to do than might be immediately apparent. Mother has to be just the right sort of crazy, and Norman has to deliver that curious likability that gets us to feel for him. He’s conveniently not too crazy now, of course, and cute as a button, but we have to see the instability brewing in him. Both actors manage to create themselves rather well.

The potential for problems here is that we have to set up a lot of other things too. We need connections that are going to create further problems, and it wouldn’t hurt if we had a lot of secrets flying from every direction. We have them, and they don’t look bad so far, but I worry now that the show is going to hang too much on throwing out new twists and secrets in a kind of LOST-esque, rapid-fire way that ultimately detracts from building the characters.

There’s a fun factor behind the idea that it isn’t enough that Mother is crazy, but we also have to move to Crazy Town, and happen to buy the main crazy attraction there, but it also feels a little much. Throw in a lot of “don’t look in the bathtub” moments, and the show risks overplaying its hand. That’s a shame, because the show is filled to bursting without them, and is certainly daring enough in other ways that it doesn’t need to pander.

What we want, those of us who have any interest to tune in by name alone, is Norman. We want Norma too, but we don’t actually know that before we tune in. The show gives them to us by their reactions, which are often surprisingly compelling in their oddness, and just by the conversations they have with each other. We don’t need all the flash and horror cliches.

That said, beyond a few particularly questionable moments (Norman is instantly adopted by the cool crowd, which, of course, may come back to haunt him), the show actually has few negatives… if you can stomach it. Mostly what it has are elements of construction and writing that make me nervous about the future. The problem there is that I know where I hope it’s going, and where I think it’s going, and I’m only a fan of one of them.

Still, it’s mostly put together well, and even if you may actually find yourself shocked during several key escapades, it’s worth checking out. The pilot is a hard run at establishment, which is necessary, but it’s the sort of mad dash that doesn’t always go over well. In fact, it has a lot of elements that usually leave me bashing a show, and advising people to not bother, because of the ten-episode transformation coming that will leave a showing looking nothing like it did at the start. This time, I think it will work out, and only because at its core, I believe this show wants to give us the characters in a way that has played so strongly for recent efforts like American Horror Story. If it lasts long enough to settle into its effort, this should be a serious hit, and by then it will deserve to be.

“Bates Motel,” serves as a contemporary prequel to the genre-defining film, “Psycho,” and promises to give viewers an intimate portrayal of how Norman Bates’ psyche unravels through his teenage years.

Fans will have access to the dark, twisted backstory and learn first hand just how deeply intricate his relationship with his mother, Norma, truly is and how she helped forge the most famous serial killer of them all.