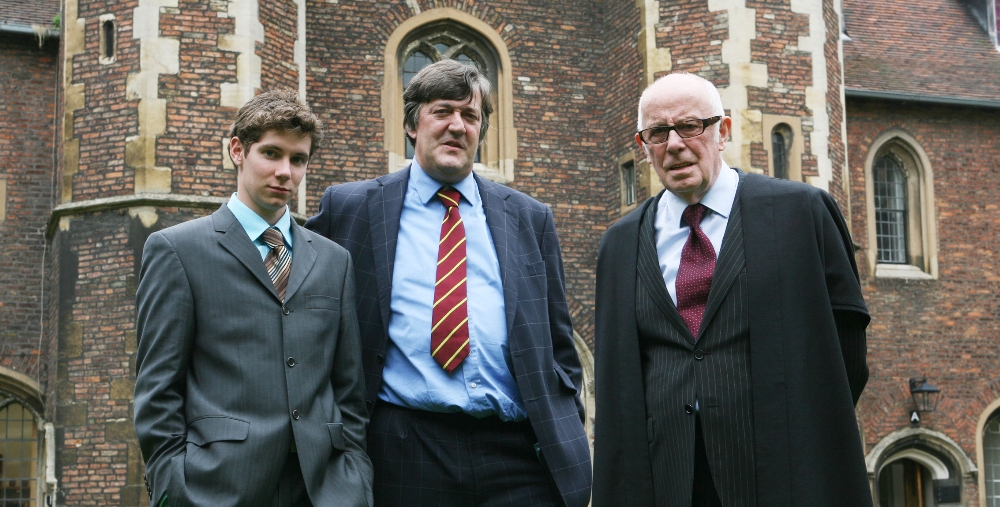 For ease of explanation, if you happen to be a fan of Doc Martin, Kingdom is a show you’re almost guaranteed to enjoy. It doesn’t have the snarkiness (Stephen Fry‘s Peter Kingdom is the most jovial fellow you’re going to run into) but there are a lot of similarities. Most obvious, before you know anything, is the inclusion of a wildly popular British comedian in a role that leans toward drama. Both shows also take place in small towns, and both main characters are professionals occupied mostly by the curious antics of the local eccentrics.

Fry plays a solicitor, which opens more doors, and he has an assistant, Lyle (Karl Davies), whose youthful ambition and spunky disposition are as much a hinderance as a virtue. Where Doc Martin incorporates a mildly crazy populace (like the chemist with the permanent neckbrace), Kingdom not only brings them from the outside, by way of a litigation-happy client, and others, but also introduces us to Kingdom’s sister, Beatrice (Hermione Norris), who isn’t playing with a full deck by any stretch. Throw in an overarching plotline involving Peter’s deceased/missing brother, and what ought to be the simple life of a country solicitor is anything but.

Fry plays himself up in the series, and is perfect for the role. Much as I don’t want to take away from his abilities, because he’s a fine actor, he is here playing something like “exactly who he looks like.” Juggling the wide range of demands that find their way to his door, often taxed to excess and strained mentally by his neurotic sister and the burden of his lost brother’s lifestyle, while managing to maintain a calm resolve to help everyone he can is simply how you’d peg Fry if he walked into a pub. Of course, you’ve still got to deliver it, especially when the show means to balance a light-hearted entertainment with moments of genre-defying pathos, all while convincingly delivering the idea that Peter doesn’t just rid himself of his sister. Still, Fry is playing to his strengths whenever “jovial,” “witty,” and “towering compassion,” are on the agenda. 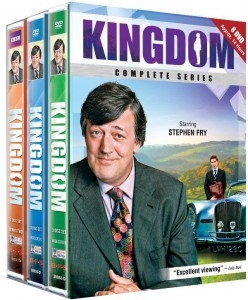 Like Doc Martin, the show is primarily pulled along by almost a cacophony of events every episode, with plot arcs swirling around Kingdom and his compatriots. If it isn’t the town managers playing out their vendetta against a client by installing traffic signs so as to actually block him entering his home, then it’s Beatrice’s latest ranting, destructive cry for attention.

As the series progresses (through it’s unfortunately short 18-episode span), Karl Davies steps up as his character “matures” into solicitorhood. Though he has thoughts of the big city, he slowly learns that his mentor is actually managing an amazing amount of good work, and his character’s personal interplay is one the show’s strongest features. Also of note, British TV fans will recognize the brilliant Tony Slattery (U.S. fans may have caught the original Whose Line Is It Anyway?), who is given something of a stock character pieced together as the butt of various jokes, but turns into something more solid.

The series has two major difficulties, but they shouldn’t amount to more than audiences can stand, and even with them, the show oozes charm. First, the plotline involving Peter’s brother is overused, heavy-handed, and results in (spoiler alert) his eventual return, which throws him into the mix more directly, rarely to solid effect. Second, unlike Doc Martin, which ended the fifth series with a wonderful series finale (in case it was), the third season of Kingdom ends basically on a cliffhanger, and one which will never be resolved.

That said, the series delivers well throughout the run it did get, and Fry has possibly never delivered his unique charm better. This one is “comfort food” viewing that is curiously addicting. I highly recommend the purchase, although, as much as I enjoy it, I’m not sure how many will find it rewatchable.

In the small English town of Market Shipborough, Peter Kingdom (Stephen Fry) is a kindly country solicitor who stands up for the little guy. Despite his professional success, Kingdom’s life is overshadowed by the mysterious vanishing of his brother and business partner, Simon (Dominic Mafham).

As he drives through the beautiful Norfolk countryside, investigating one case after another, Peter is constantly searching for clues to the mystery of his brother’s disappearance. Cool-headed and well-respected, Peter Kingdom is the man to go to with any problem – legal or not – in this alternately comical and moving series.

This set contains all 18 episodes of Kingdom (Series One, Two and Three).

David Lowery is among the strangest directors working today and in all the best ways such a statement can be taken. He turns out...
Read more