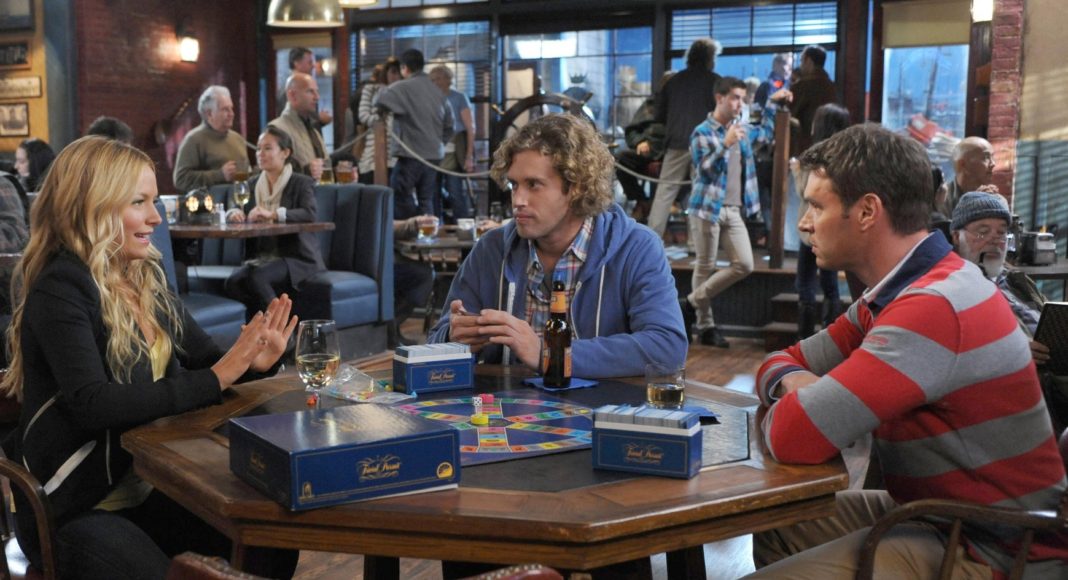 The Goodwin Games TV Review – Watch It Before Premiere

The Goodwin Games stars Scott Foley, Becki Newton, and T.J. Miller as the Goodwin siblings who recently lost their father, Benjamin Goodwin (Beau Bridges). A bit of an odd duck, Benjamin had a quirky parenting style, which involved a lot of games, and there’s no reason that his death should be any different. It turns out that he has several million dollars, and he’s going to give it to whoever wins The Goodwin Games, an unknown assortment of challenges designed to get his kids back together.

Henry (Foley), Chloe (Newton), and Jimmy (Miller) are about as diverse as a set of siblings can be. An overachieving surgeon, a flaky, hopeful actress, and a repeat con with no sense of responsibility, the Goodwins have one thing in common, wanting to get away from their dad. His strange parenting theory apparently pushed his kids away, and he repeatedly admits to not being a great father during his videotaped “will,” but if the pilot episode lets us know anything, it’s that while he may not have been the best father according the textbook definition, he sure payed a hell of a lot of attention to what happened.

Like a lot of pilots these days, we’ve got a show based on a gimmick, and very little idea how the series itself will play out week to week. Sure, some game is going to get thrown at our siblings, who still have to live their lives in the meantime, but where will things go, and what will it look like? It’s tough to say. The hope is simply that you’ve taken to these people in roughly 22 minutes, and you’re going to go along with another theme of the show, and say, “I’m in.” But, does the show really give you enough to work with? Oddly enough, I think a lot of people may answer that one in the affirmative, as long as enough of them manage to take it in.

The show kicks off a little stagy, with Henry overselling his schedule and humanitarian efforts, but it quickly hits an interesting stride. “Believably sibling” is a harder note to deliver than many probably guess, and this is a show that at least gets that right. Jimmy, fresh from prison, and on the run from nefarious elements he owes money, is slightly too goofball, but settles down by the end of one episode. His visits to his daughter don’t hurt his character either.

The pilot seems at odds with itself at times, trying to ride the line between offering up characters that are going to suck viewers in, and delivering tons of information, and it manages it better than most. It isn’t the sort of show that’s going to have you calling it your new favorite right away though, it needs three or four episodes to get its shtick out from under it, but if it can make it that long, there may be a treat in store for those taking the ride. Of course, the built-in endgame is a question mark, and the hurdle of continuing something against its own theory may be a tough puzzle for writers.

These slow-boilers have had a rough time lately, especially on non-cable networks, so viewers may shy away right there, but this one has a lot going for it. Though it isn’t something to leave you rolling in the aisles, it has its moments, and there’s a certain charm at play that rewards the viewing. Shtick aside, most of us wonder a bit about our parents, and whether we’ve determined to stay away from them, and our siblings, for the better part of a decade, there’s something to the idea of going home again.

In an effort to give everyone a solid chance to fall for the show, the pilot is available before it airs. You can catch it on FOX‘s own website, or at Hulu – see below.

View the rating as based in equal parts on the show’s actual merits, and the potential. If this plays through a season the right way, it could become a favorite, and would deserve to.

Where there’s a will, there’s a way. And when that will’s worth more than 20 million dollars, you can bet someone’s going to find a way to get the cash. From the executive producers of “How I Met Your Mother,” THE GOODWIN GAMES is a single-camera comedy that tells the story of three grown siblings who return home after their father’s death, and unexpectedly find themselves poised to inherit a vast fortune – if they adhere to their late father’s wishes.

If any of the Goodwin kids feels like they deserve the money, then it’s HENRY (Scott Foley), the eldest child and an overachieving surgeon. He sees himself as a role model for his less successful siblings – and reminds them every chance he gets. But returning home will force Henry to question the choices he’s made in life, especially as he reconnects with his first love and true soulmate, LUCINDA (Kat Foster).

Middle sibling CHLOE (Becki Newton) was a child math prodigy, and her unofficial role as “the smart one” of the family still sends Henry into fits of jealousy. But long ago, Chloe gave up academics in favor of being a popular mean girl. Now, through a series of hidden messages, her late father will lead Chloe back to her old love of numbers – and to fulfilling her potential as the new center of the family.

Of the three siblings, the youngest, JIMMY (T.J. Miller), could use that inheritance the most. A small-time ex-con and dull-witted guitarist who’s deep in debt to a loan shark, Jimmy may be the family screw-up, but he has more heart than anyone. Like his siblings, Jimmy’s also returning to unfinished business in this town: specifically, reconnecting with his estranged eight-year-old daughter.

Pulling the strings from beyond the grave is the children’s late father, BENJAMIN (guest star Beau Bridges), a college math professor. Guilty over not having parented his kids better in their youth, Benjamin has left behind a series of unique challenges – administered by his estate attorney APRIL (Melissa Tang). Through these tasks, Benjamin hopes he can get his children to rediscover their true selves and learn the lessons he failed to instill in them while he was alive.

Their potential reward? More than 20 million dollars – a fortune that they never knew their father had – and the chance to become the people their father wanted them to be. So let THE GOODWIN GAMES begin!