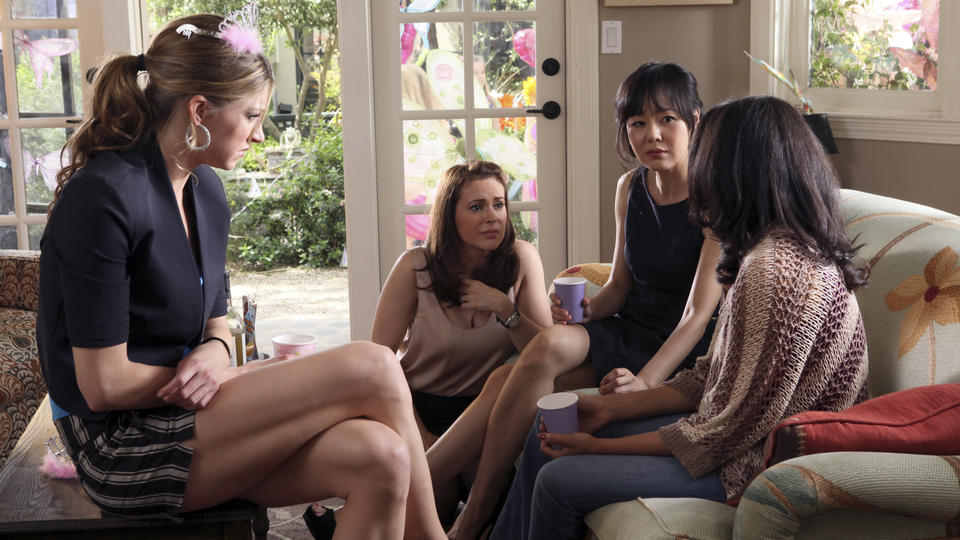 British TV has some of the best TV shows in the world. Sure, you have the dodgy soaps like Eastenders and Corrie but then you also have the Great British Bake Off Shameless which makes the cost of installing TV aerials Bolton and the TV license well worth it.

ABC‘s Mistresses aims for UK gold, but we all know the dangers involved with the “Americanization” of British television. For every The Office, there are four or five Couplings. There’s even a show (Episodes) based on the often misguided, or downright ludicrous, decisions involved in trying to take something that works for British audiences, and turn them into something that appeals to those across the pond. Sometimes the theory is to tweak the way things work, sprinkle in notes of American culture, and hopefully deliver the spirit of things. Once in a while, as with the horrible failure that was the American Coupling (based on one of the best shows ever, by the way), the idea is to try to keep the show intact as much as possible, all the way down to only the most minor of changes to the script. Both theories have their hits and misses.

Mistresses is of the latter variety. Although some changes were necessary, for a variety of reasons, watching the American version feels much like simply watching the British version again… only it’s not quite as good.

The show focuses on four women, but Savi (Alyssa Milano) is the hub around which the wheel spins. Already we have one of the show’s potential problems. The success or failure of the American version, much as you hate to say it, is going to come down in large part to the audience’s ability to accept Milano. It isn’t so much a question of believing her in the role, she gives a passable performance, but simply believing her as an adult person, which somehow she doesn’t manage completely convincingly. Given the target demographic, this is going to be a real sticking point for the show.

Savi is a lawyer hoping to become partner at her firm in the near future (her “lawyer” moments may be the most difficult of all), but her home life is not exactly on the most solid footing at the moment. She’s been trying to get pregnant for some time, which creates its own conflict for her professional life, but her husband, Harry, has a fertility issue, and suddenly the relationship isn’t that much fun.

Savi’s sister, Josslyn, wants nothing to do with a serious relationship, or anything involving the word “serious,” and given the show’s title, we aren’t hard-pressed to figure out where that leads.

Savi and Josslyn’s friend, April, adds a different level to the confusion that is the group life. She is a recent widow with a young daughter, but she starts getting strange phone calls, and becomes obsessed with the idea that her husband is actually still alive. This naturally leads to its own twists and turns, and a life less ordinary.

Rounding out the crew is Karen (LOST‘s Yunjin Kim), a psychiatrist who had an affair with a terminal patient, and is now wrapped up with his wife and son. The son suspects that his father was having an affair, and turns to Karen for answers. In the original version of the show, this role was played brilliantly by Sarah Parish, and was far and away the most interesting plot line, and it looks like we’re going to be in the same boat here. Yunjin Kim, thus far, does a great job with the complexities involved in delivering the wild situation.

As we enter the show, some of the girls, obviously, are already involved in extra-marital affairs, were involved in them, or are about to be, and the four women are coming back together as a group, what with Karen having removed herself from social situations because of her affair. Now back together, and with very different perspectives, the group is ready to share the comings and goings of their lives, along with their opinions, and the play begins. Of course with the number of extramarital affairs happening, there will soon be a fallout and that will end in divorce. Since one of the characters is a lawyer, there is no doubt that we will probably see how they handle the divorce proceedings on the show. It is always interesting to see how family law is handled on TV, some may stick to what really happens when a couple uses a law firm similar to Nathens, Siegel LLP but others will stick as close as they can, but go with a more dramatic effect.

On the one hand, reviewing a show that has already existed for quite some time is a tricky game. On the other, this one needs to win out on its own, and most audiences will have little knowledge of the original. That said, focusing on the plot, themes, and general arc of the show seems unnecessary. There are countless reviews, recaps, a complete spoils of the original available, and as I said, this is a translation that is sticking toward the side of re-shooting rather than re-imagining.

The differences mainly come down to the actresses’ abilities, and a certain shift in tone that fans of British television will recognize immediately. That shift is hard to describe, but is basically the result of American television producers having certain assumptions locked in when they are backing constructions. For example, viewers are actually looking for things that play at real situations as opposed to showcasing something that might actually be a real situation. Put similar assumptions about what viewers want together with a few other ideas – such as the idea that you aren’t really paying attention anyway, so we have to move slow and repeat ourselves – and Mistresses is the sort of final product you get.

The original was wonderfully about a group of women who are forty (give or take), and curiously find themselves in a strange set of circumstances which ultimately involves a lot of extra-marital action. It was its own kind of celebration of these women as people, and offered up their lives to give some insight into the complications, weaknesses, and even strengths involved in real people making real decisions.

The American version, while still decent enough and ultimately a mostly positive experience, seems to be put together by people who are irritated by the fact that the women are supposed to be 40 (so we have to try to make it seem like they aren’t in whatever ways we can manage it). Worse, where the British version sees its title as a way to point at the fact mistresses are, by definition, people, the American version is far more interested in pointing out that mistresses, by definition, have sex.

Ultimately, this one is still worth checking out, but mostly because you can still see the base through the gloss. The potential is still there, and several elements stand out as hopeful markers (like Kim’s performance). It will be interesting to see what happens if this lasts through a handful of episodes, especially if the ratings are strong.

For a real testament to the treatment of the show, just check out this quick promo spot for the ABC version, and then compare to a trailer for the final season of the original show. The real tell here is that the show is not as bad as the impression the promo gives, but that’s how we’re selling it.

Based on the hit UK television series of the same name, “Mistresses” is a provocative and thrilling drama about the scandalous lives of a sexy and sassy group of four girlfriends, each on her own path to self-discovery.

Savannah (“Savi”) is a successful career woman working toward the next phase in her life — both professionally and personally — bucking for partner at the law firm where she works while also trying to start a family with her husband, Harry. They’ve been trying to get pregnant for some time, but when their fertility issues begin to take center stage, Savi finds herself attracted to her flirtatious colleague, Dominic.

Their common best friend, April, is a recent widow and mother of a ten-year-old daughter. In the effort to rebuild her life and move forward, April opens a shop for home decorating. After she receives her late husband’s lucrative life insurance check, which may have been provided by his company after they had compared policies (go here for more information) she begins getting prank phone calls and tells her closest girlfriends that she’s convinced her husband is still alive.

Karen is a therapist with her own thriving practice, reconnecting with the girls after her involvement in a complicated relationship with a wealthy, married patient goes too far; she was having an affair with a terminally ill client to whom she had prescribed morphine. After his death, the man’s distraught son, Sam, confides in a guilt-ridden Karen, unaware of her role in his father’s life. The grieving widow, Elizabeth Grey (recurring guest star Penelope Ann Miller [“The Artist”), has no idea her late husband had a romance with another woman.

These four friends find support and guidance with each other as they brave their turbulent journeys and life’s storms of excitement, secrecy and betrayal, all the while bound by the complex relationships they’ve created.