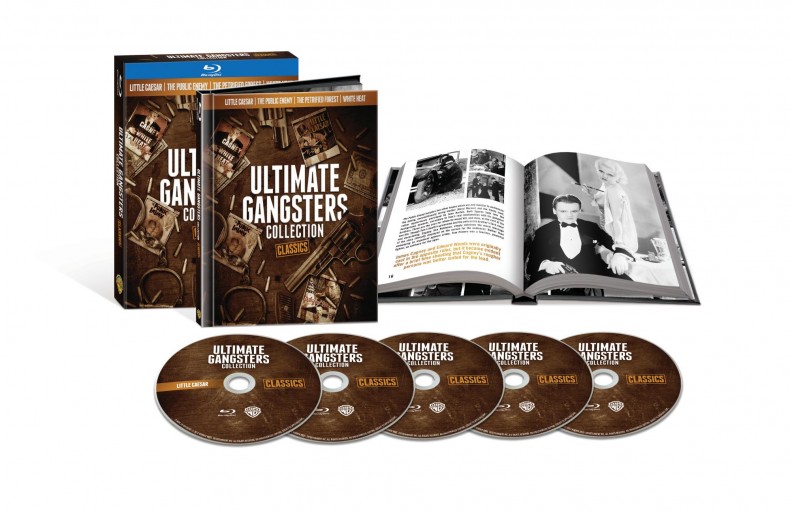 When you’re looking to put together a movie collection, it doesn’t hurt if you happen to be Warner Brothers. If the collection you’re after is classic gangster movies, you’re really in luck.

For fans of the genre, especially those looking to upgrade titles to Blu-Ray, the new Ultimate Gangsters Collection: Classics is one you’ve got to get your hands on. Not only do you get some of the films that helped create the genre, and have become the foundation upon which countless movies are built, but the extras are worth the price on their own.

The collection here comes at you like a history lesson, not just of the genre, but of film. Little Caesar, with Edward G. Robinson setting the stage for all future gangsters with “short man syndrome,” but struggling mightily against the production theories of the day, is not only a classic treasure, but riddled with insights into what films themselves were and what they would become. Already celebrated for its curious visual style, and its pronounced insecurity as a “talkie,” the film nevertheless gives us a solid spin on the general motifs and character motivations that would find their way into virtually every film in the genre.

The Public Enemy moves more solidly into a new era of film and the abilities of same. Not only does James Cagney get his breakout role here, but he seems to have a better idea of how to sell a role than Robinson, and the supporting cast certainly plays better. Though both of these films were released in 1931, there is a clear old school/new school difference between them. All other things aside, The Public Enemy has a certain swagger about it, layout out that strange sense of “gangster style” that would become a common theme for decades. 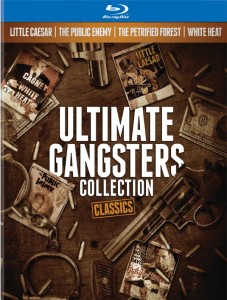 The Petrified Forest may be seen by some as the odd duck out in this collection, and rightly so, but it has its place not only within the genre, but as a kind of historic vehicle. It’s Bogart’s first big role as star, and it’s a solid showcase of a certain, not so uncommon, sub-genre. It doesn’t have quite the same flair as the others here, especially for the uninitiated, but it holds up well for genre fans.

White Heat is pretty clearly the big gun here, as witnessed by the bonus treatment, and that’s as it should be. Easily one of the most referenced gangster films, and a title that is difficult to distance from Cagney, White Heat is without question one of the best efforts the genre has ever made. Just based on how watchable it is to any audience today puts it in a very small group of pre-1950 films.

Each film comes with a commentary by various historians, a featurette focusing on the title, and a Warner Night at the Movies featurette with Leonard Maltin. These all vary in their interest, but all are well worth the time. Notably, the commentaries on Little Caesar and White Heat, by film historians, are excellent, giving a mix of history of the film itself and film during the time more generally. Also, the featurette on Little Caesar, which details the interest in, and shift toward, anti-heroes is better than you’d expect.

A fifth disc comes with a feature documentary Public Enemies: The Golden Age of the Gangster Film, and its a treat all on its own. Anyone with even a passing interest in gangster movies, or who can claim film buff status, will find a lot to take in here. Through analysis of a variety of scenes, viewers are given a surprisingly detailed look at how such films were constructed, as well as the thought processes going on behind the camera.

Overall, this is a collection that you’ve got to pick up.

Below find a lot more info, check out some clips, and enter to win a copy of your very own.

As part of the studio’s 90th Anniversary celebration, eight of Warner Bros. Pictures’ greatest gangster films – from Edward G. Robinson’s 1931 classic Little Caesar to Martin Scorsese’s Oscar®-winning masterpiece The Departed[1] — will now be available in two Blu-ray™ sets May 21. Released to coincide with Father’s Day gift-giving, the WB genre greats, along with one of Paramount’s best gangster films, will be offered in the Ultimate Gangster Collection: Classic and Ultimate Gangster Collection: Contemporary.

The four films in the Classic Collection have been remastered for their Blu-ray debuts. They include The Public Enemy and White Heat with the legendary performances of James Cagney; Little Caesar with Edward G. Robinson as hoodlum Rico Bandello; and The Petrified Forest starring Humphrey Bogart, Bette Davis and Leslie Howard. The collection includes a feature-length documentary Public Enemies: The Golden Age of the Gangster Drama which explores the development of the crime genre and the rise of Warner stars like Cagney, Bogart and Robinson. Also discussed are directors such as Walsh, Wellman and Curtiz; the films themselves; their influence on filmmakers worldwide; and Warner’s impact in establishing the genre.

The Contemporary Collection is a 5-disc set with five crime films that include Martin Scorsese’s GoodFellas, The Departed and Mean Streets; Heat, starring Al Pacino, Robert De Niro and Val Kilmer; and Paramount’s The Untouchables with Kevin Costner, De Niro and Sean Connery.

These two collections are being released in tribute to the films that remain a cornerstone in the legacy of Warner Bros. Major Hollywood studios in the ‘30s and ‘40s were each known for their distinctive styles (MGM for its musicals, Universal for its horror films, etc.). Warner Bros. was best known for firmly establishing the genre which contained socially conscious themes and a simple visual look (low key lighting and sparse sets). Nowhere were these elements more prominent than in the films featured in the Classic Edition, with the Contemporary Edition showing how a new generation of crime drama has been established. 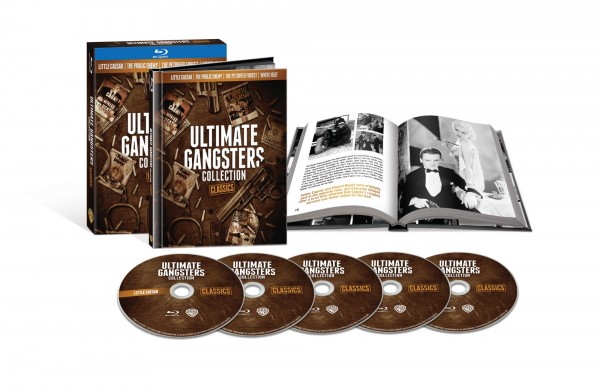 The Public Enemy showcases James Cagney’s powerful 1931 breakthrough performance as streetwise tough guy Tom Powers, a role Cagney won only because production chief Darryl F. Zanuck made a late casting change. Cagney had a secondary role but Zanuck soon spotted Cagney’s screen dominance and gave him the star part, even after shooting had begun. From that moment, an indelible genre classic and an enduring star career were both born.

Bristling with ’20s style, dialogue and desperation under the masterful directorial eye of William A. Wellman, this is a virtual time capsule of the Prohibition era — taut, gritty and hard-hitting. Several restored scenes (deleted from subsequent reissue versions due to enforcement of the Production code) from the original release version of the film are included — unseen for decades until they were restored by WHV for its premiere DVD release.

“R-I-C-O, Little Caesar, that’s who!” Edward G. Robinson bellowed into the phone and Hollywood got the message. The 37-year-old Robinson, not gifted with matinee-idol looks, was nonetheless a first-class star. Little Caesar is the tale of pugnacious Caesar Enrico Bandello, a hoodlum with a Chicago-sized chip on his shoulder, few attachments, fewer friends and no sense of underworld diplomacy.

A rundown diner bakes in the Arizona heat. Inside, fugitive killer Duke Mantee sweats out a manhunt, holding disillusioned writer Alan Squier, young Gabby Maple and a handful of other hostages. The Petrified Forest, Robert E. Sherwood’s 1935 Broadway success about survival of the fittest, hit the screen a year later with Leslie Howard and Humphrey Bogart magnificently recreating their stage roles and Bette Davis ably reteaming with her Of Human Bondage co-star Howard. The film presented Bogart with his first major starring role and helped launch his brilliant movie career.

Playing a psychotic thug, Cody Jarrett, devoted to his hard-boiled “Ma,” James Cagney gives a performance to match his electrifying work in The Public Enemy. Tightly directed by Raoul Walsh, this fast-paced thriller tracing Jarrett’s violent life in and out of jail is among the most vivid screen performances of Cagney’s career.