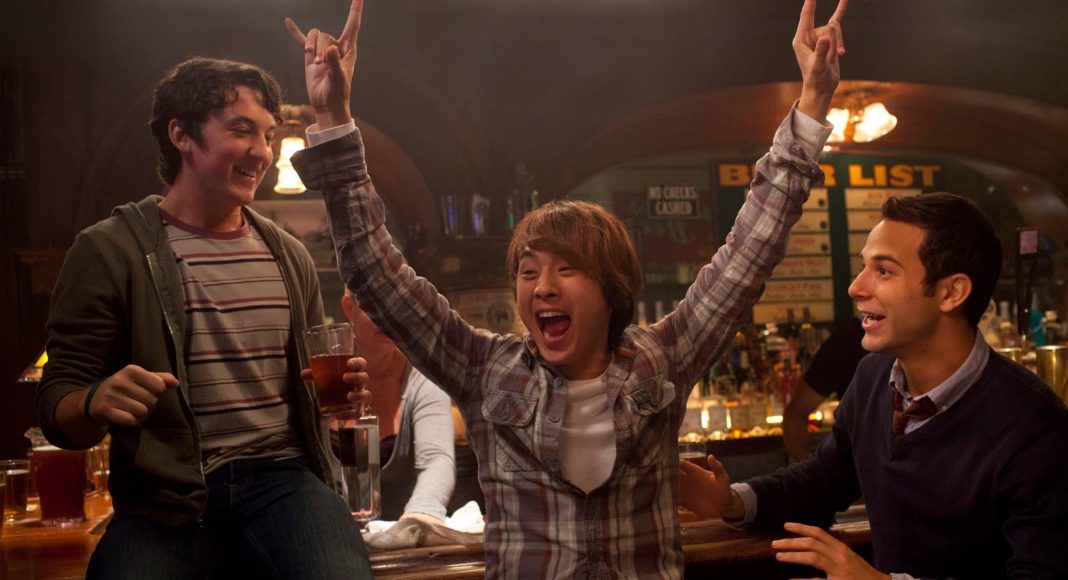 21 & Over is on its way to your house right now (oh, yes, it isn’t asking, it’s telling), and I have a chance for you to make the transition easier. Enter below for your chance to win your very own copy of the Blu-Ray release.

Don’t let this one fool you (or do, as the case may be), it looks like a lot of fun, and that’s the feedback we’ve been getting here.

As a special bonus, check out our list of Party Animals, and let us know how you think the characters in 21 & Over rate! 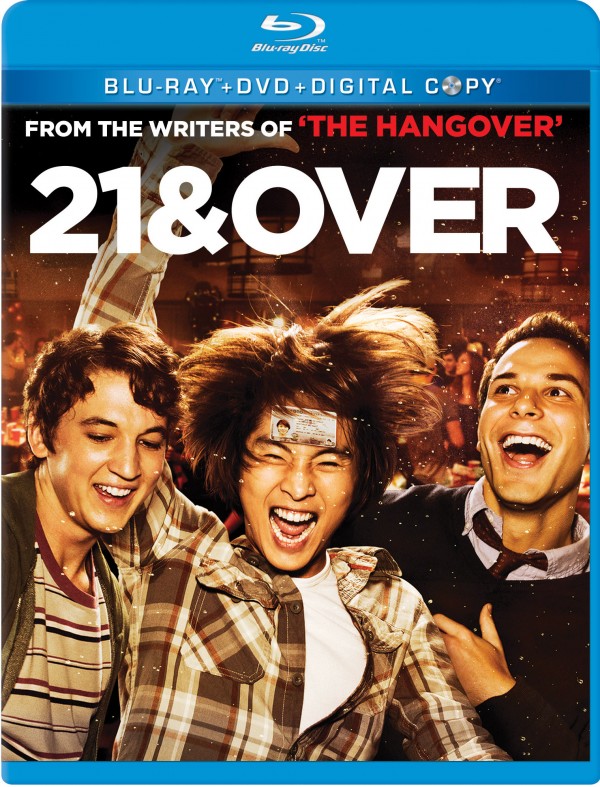 To celebrate the release of this year’s biggest and wildest party movie, 21 and Over, we look back and countdown the Top 10 movie characters who would be great to party with in real life!

From the writers of The Hangover comes a movie 21 years in the making. Straight-A college student Jeff Chang (JUSTIN CHON of the Twilight Saga) has always done what’s expected of him. But when his two best friends Casey (SKYLAR ASTIN of Pitch Perfect, Wreck-It Ralph) and Miller (MILES TELLER of The Spectacular Now, Project X, Rabbit Hole) surprise him with a visit for his 21st birthday, he decides to do what’s unexpected for a change, even though his critical medical school interview is early the next morning. What was supposed to be one beer becomes one night of chaos, over indulgence and utter debauchery in this outrageous comedy. 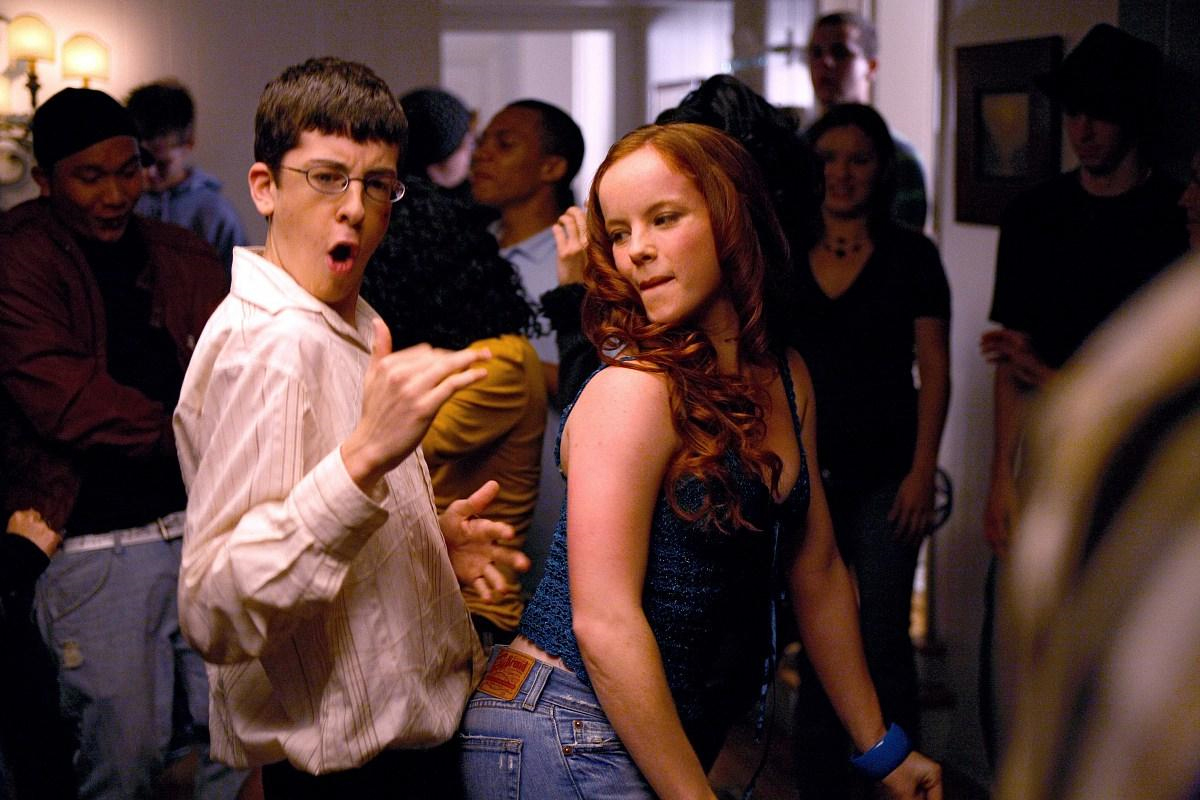 First up, let’s go back to Summer 2007… Superbad really succeeded in its scenes in which we were introduced to one of the more interesting party movie characters of the silver-screen – Ladies and Gentlemen, may we present, McLovin’. His dual evening between living it up at the biggest party of the year and his experience running around with those hilarious cops is what makes Mr. McLovin’ legendary in our book. That and his bedroom encounter… 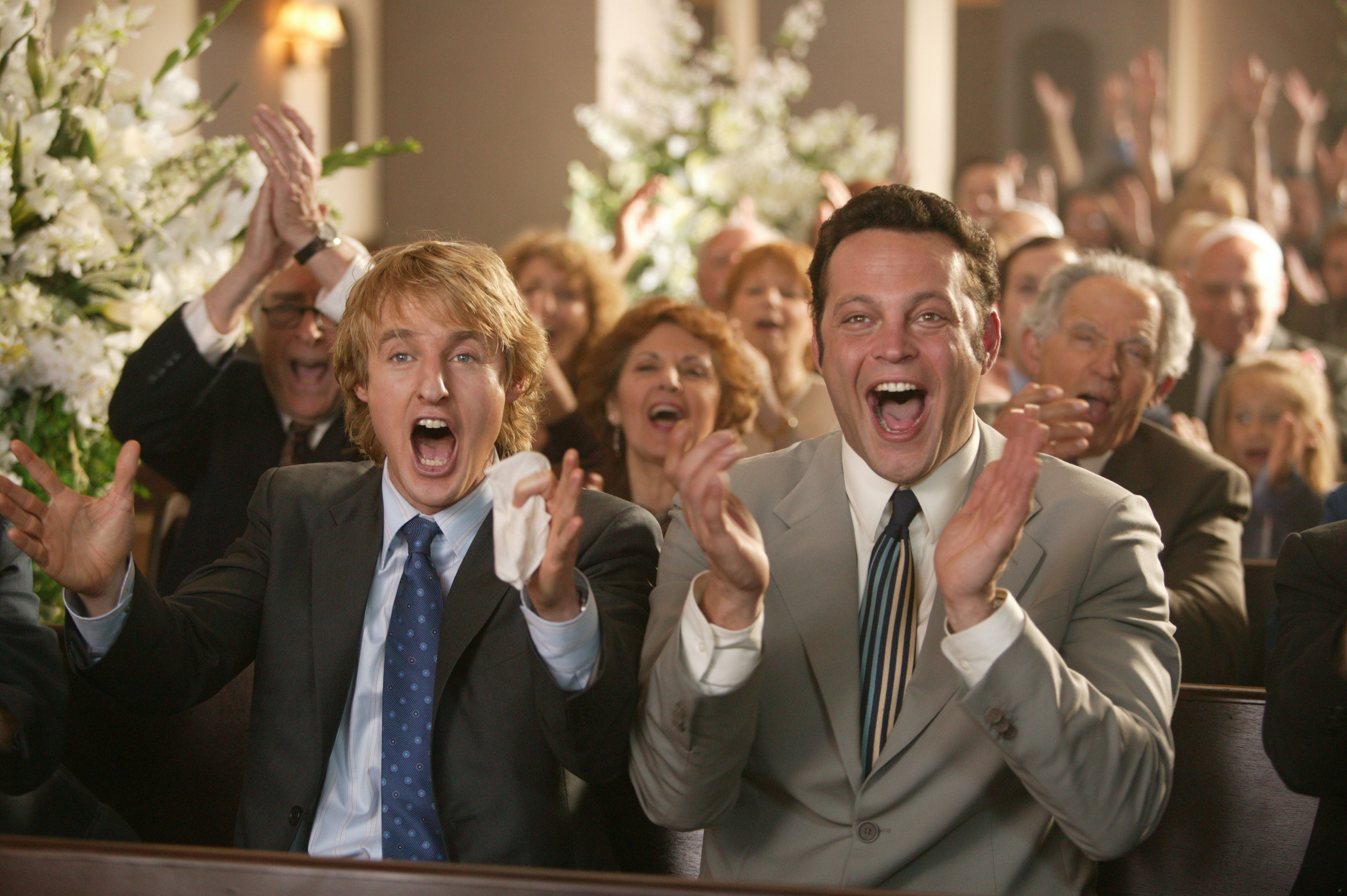 Doesn’t everybody wish they had a pal like Jeremy Gray, not only because he’s a great friend and an awesome wingman, but he’s also mastered the art of partying. I think spending some quality party time with Jeremy Gray could teach anyone a thing or two about how to be the coolest person in any party situation. Charming, charismatic and very affectionate when the time calls, Owen Wilson absolutely brings this character to life in the hit 2005 comedy. Wilson and Vaughn team up again for the comedy The Internship.

The Dude from The Big Lebowski 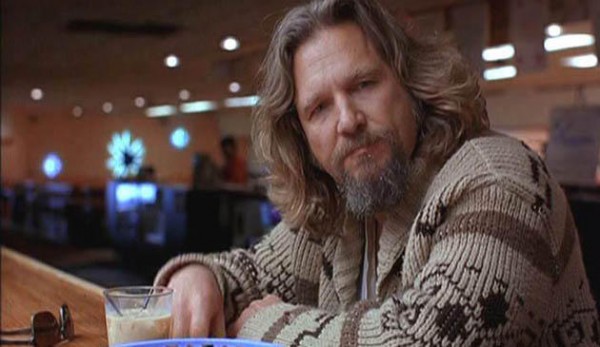 White Russians, weed and bowling? Maybe not the norm, but how could you not want to party with The Dude? Possibly the most iconic character in a Coen Brothers movie and that’s saying something. The Dude is possibly the most laid back guy ever and he comes across like he has a few awesome stories about back in the day. He could shed a lot of hippy wisdom on you while you sip on a White Russian. Sounds like a good time to me. 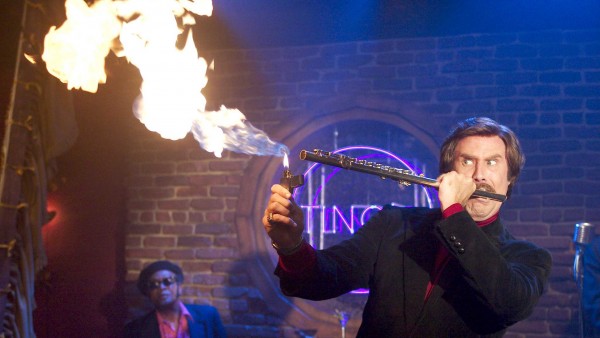 Forget about rock stars and professional athletes — as Ron Burgundy proved, all the best parties are reserved for your local anchorman, at least if he’s as coolly mustached as this Scotch-loving titan of the airwaves. And who can blame the ladies for loving Ron, what with his many leisure suits, immaculately coiffed hair, or skill with the jazz flute? Though his views might be outdated when it comes to gender roles, Ron isn’t shy about showing his sensitive side — and whether he’s hurtling into a swinger-filled pool or urging his viewers to stay classy, he’s always ready to cut loose. 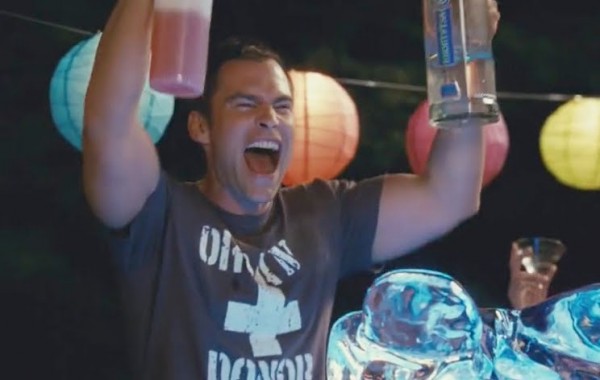 I mean, no need to elaborate here. He is the reason an entire generation of college dudes act the way they do. That’s influence. For every high school freshman, Steve Stifler is the apex of cool. He’s filled with grandiose ideas of what would be really cool, but hardly follows through on the promise of awesome. But we have some love for Sean William Scott, and while the character might fall on his face more often than not, he still tries harder than anyone on this list. Which might not make him cool, but always ensures that he’s at the center of every party. He tends to screw things up more than he’d ever admit, but his relentless thirst for partying has earned him a well-deserved spot on this list. 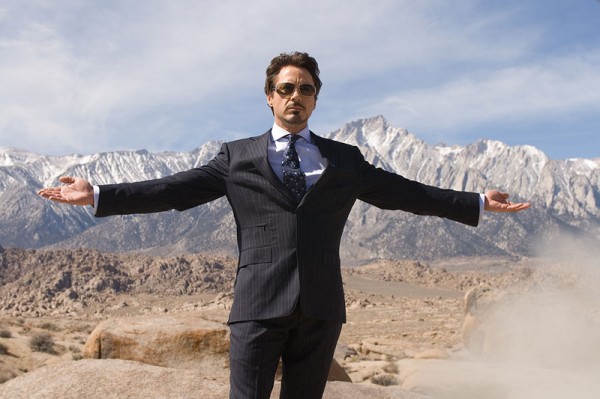 Comic book hero-turned-movie-hero Tony Stark is the very definition of a self-destructive party animal. In a way, we’d like to think the Iron Man movies are a metaphor for Robert Downey Jr.’s life, especially the part where he gets in the Indie car to race at Monte Carlo and decides to pilot his armour while intoxicated. Honestly, though, being able to host (or crash) a wicked party is probably a prerequisite of becoming a billionaire. In fact, Stark probably became a billionaire just so he could party. I mean the guy built battle armour because he was bored. How hard do you have to party to resort to building battle armour just to keep things interesting? While we admire him, we hope we never get to that point. 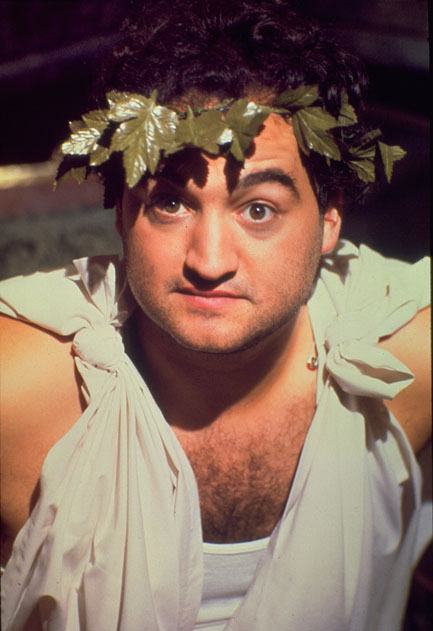 Of course we had to have John Belushi at No. 1, especially for his role as the future senator John Blutarsky. Animal House is the ultimate guy movie, it’s that movie all the guys constantly quote and then start laughing. And if you’ve not seen it, shame on you, go watch Animal House if for no other reason than to understand why we speak about John Belushi in hushed whispers. 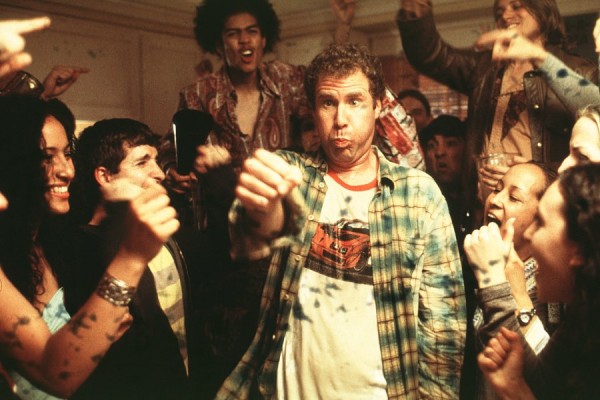 Will Ferrell’s blubbering former frat brother, Frank the Tank, relieves his college years by funneling beer (“once it hits your lips, it’s so good!”), getting slaughtered, and announcing “We’re going streaking!” We’d be complete fools not to include Frank the Tank on this list after watching the way that man can party. There is a very strong chance that if you partied with Frank the Tank, you wouldn’t remember a whole lot from the night. This is probably a really good thing since you were most likely making a complete fool of yourself when you thought you were being ‘the man.’ Partying with Frank the Tank would teach you about your limits. Which, when it comes to partying is a very important thing you should know about yourself. Oh and Frank could make you look really smart in front of girls since he sort of loses his mind when he’s drunk.

About as lovable an alcoholic as any you’ll find on the silver screen, Arthur Bach (Dudley Moore) masked his loneliness and poor self-esteem by piddling away his family’s massive fortune on booze and hookers — at least until he met Linda Marolla (Liza Minelli), the salt-of-the-earth waitress who deepened Arthur’s doubts about his impending arranged marriage to the heiress Susan Johnson (Jill Eikenberry). Okay, so he doesn’t seem like a barrel of laughs on paper, but to meet Arthur is to be charmed by him; beneath all that irresponsible behavior and constant drunken cackling beat the heart of an unrepentant romantic who was willing to forsake a $750 million inheritance for true love. (Of course, he eventually got to have his cake and eat it too. It was the 1980s, after all.) 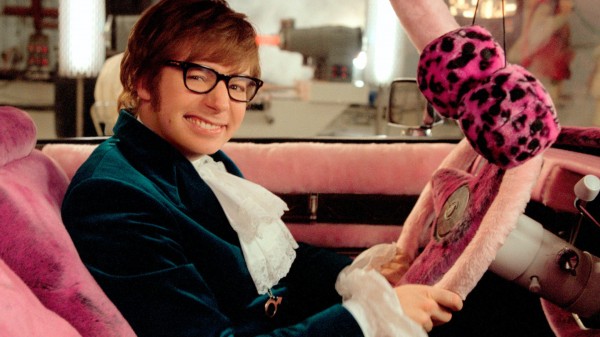 Every party animal is different, but if there’s one characteristic they all share, it’s probably the ability to project an air of self-confidence — and no one has embodied this more than Austin Powers (Mike Myers), the secret agent whose mojo survived cryogenic freezing, time travel, and the nefarious machinations of the accurately named Dr. Evil. Cheerfully unaware of his outdated wardrobe, crooked teeth, or plentiful body hair, Austin has devoted himself to the relentless pursuit of the opposite sex, and he’s been nothing if not successful, shagging Vanessa Kensington (Elizabeth Hurley), Felicity Shagwell (Heather Graham), and Foxxy Cleopatra (Beyonce Knowles), just to name a few. He may not have matinee-idol looks, but thanks to his swinging pad, charming personality, and overabundance of pheromones, Powers represents an unattainable ideal for party animals everywhere.