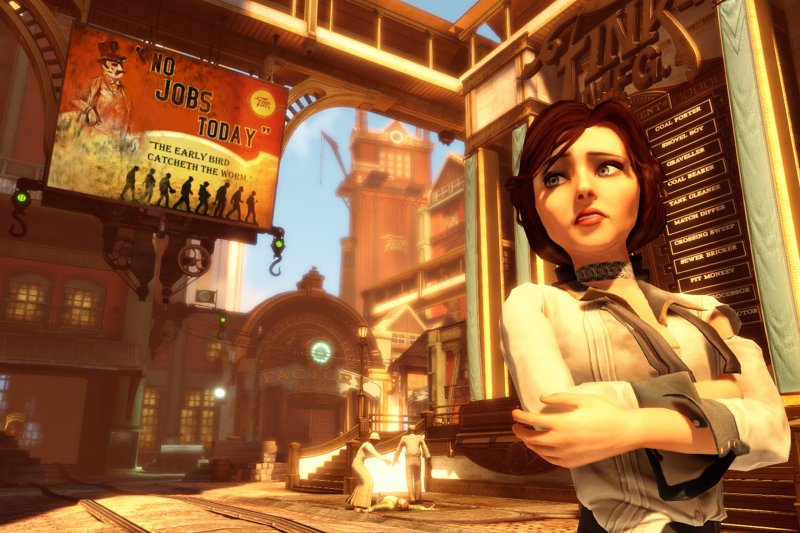 Bioshock: Infinite – Were We Too Quick To Yell GOTY?

When the highly-anticipated Bioshock: Infinite was released in March, it had barely made it to the shelves before scores of people were declaring it Game of The Year. It seems we are always doing this. Whenever a most anticipated game comes out, the hype surrounding the game is always bigger than the game itself. That being said, some games are worth the hype for example, Cyberpunk 2077, a game based on an awesome tabletop roleplay game, with a vast open cyberpunk world. Many fans can’t wait to explore Night City and get their hands on Cyberpunk 2077 weapons, dig into the different quests and interact with the different characters. It’s understandable that there is a lot of hype surrounding it, but what about Bioshock Infinite? Will bloggers flock to give their opinions as they no doubt will do with their Cyberpunk 2077 first impressions? How does Bioshock Infinite fair when put under the magnifying glass?

There’s no denying it’s a fine game, and the near-unanimous praise it has received is well deserved. But now that we’ve had time to fully absorb Irrational Games‘ magnum opus, was it too early to dub it GOTY with another nine months yet to go, especially with titles like The Last of Us doing similarly well? What about claims that Bioshock Infinite is the best game of all time? 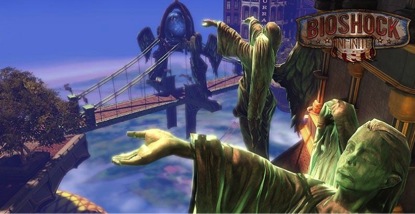 Naturally, some light spoilers follow but I’d recommend playing the game anyway before reading. Just for fun, if anything.

Rather than wax lyrical about Bioshock and try to justify its potential GOTY status – which wouldn’t be all too hard to do – I’ll start by taking a more critical look at certain aspects of the game.

What’s interesting about the reception to Bioshock: Infinite is that great emphasis is placed on how engaging the story is. Not the immersive setting, not the exchanged dialogue, and not the ending – I’m talking about the storytelling as a whole. But because the former aspects are so dazzling, it distracts from the simple fact that the storytelling itself isn’t all that.

Take a moment to stop frothing at the mouth, and consider fact that very little is explained or resolved throughout the entire game until the final five minutes. The game just keeps piling on the mysteries – just when you think the previous section’s baffling dialogue or other enigmas will be at least partly explained, the game simply side-steps them, hands you another narrative puzzle and with a wry smile whispers “just wait til the end.” 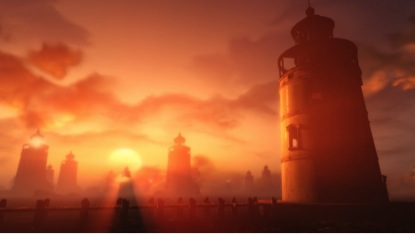 It’s virtually unnoticeable while playing it and the ending is deeply satisfying so it doesn’t detract much from the experience. But when you look back on the plot pacing long after the closing credits, it does leave you wondering where the second act went. If you ignore the final conclusion to the game, only a few tangible plot points occur across an awful lot of playing hours.

Additionally however, that’s about all the playing hours you’ll have with it because the replayability factor is low. Other than to try out the novel 1999 mode and to look for the little easter eggs you might have missed the first time round, it’s a game you’ll probably only play through twice at most.

The lack of multiplayer, while intentional on the part of Irrational, also prevents this from being a game you’ll be playing months after completing it for the first time. 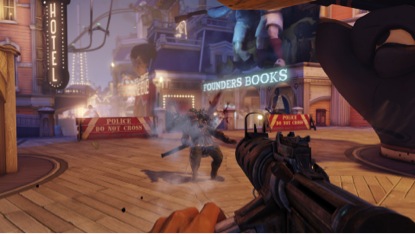 In terms of combat, there’s a lot of it. And here’s some of the problems with that:

1) The long stretches of combat seemed a little too long at times, and I found myself idly looking forward to the next bit of character interaction or plot development to break it up a bit.

2) The weapons are not weighted. At all. You know exactly what I mean if you hung onto the carbine for most of the game, and spent the remaining time looking for another if you lost it.

3) Like the games before it, Infinite is still slightly flawed by the lack of consequence to dying. Sure, you lose money and technically permadeath follows bankruptcy, but very quickly into the game you’re so rich that this stops being an issue. You can keep on trying the same section ad infinitum (no pun intended) without any real set back or impetus to act cautiously.

4) Vigors don’t seem as compelling to use as the plasmids before them, and on occasion I forgot I had the ability to use them. While that’s a personal feeling, vigors certainly seemed more tacked onto the story than plasmids did.

6) The violence within the game has been derided by many. This did not bother me personally and I found it necessary to the experience, as well as contrasting excellently with the tainted paradise feel of Columbia. That said, the qualms are understandable given how utterly visceral the violence is.

Despite the criticisms listed above, yes – Bioshock: Infinite is a more than worthy contender to the Game of the Year throne. And not only is it worthy of GOTY status…

… it truly is one of the best games ever created.

This might still seem like a heady claim given that it isn’t immune from shortcomings, but even the finest of art can be nitpicked and will cause difference of opinion. I’m sure many of the points I raised above will be met with entirely justifiable counter-points (feel free to leave them in the comments below!) but when judged as a whole, it’s undeniable that this is a game we’ll be talking about in decades to come. Not only does it allude to real world issues of oppression (as can be observed when comparing the parallels with past dictatorships) but it has the kind of aesthetic design which will be admired long after the graphics themselves are considered dated. 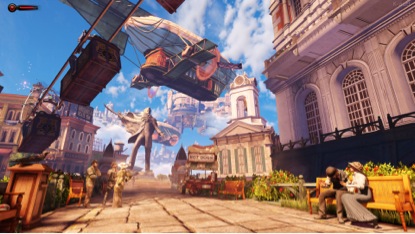 Like previous contenders to the title, such as FFVII and the HalfLife series, Bioshock: Infinite pushes the bar to stratospheric heights. It delivers on so many levels and packs such an emotional punch that it should be held up as a shining example of why video games are one of the highest forms of art. To cure the ennui present in so many games of recent, this should be given to every student enrolling at game design academy as a 101 in how to connect with your audience.

If ever there’s been a fictional world this well realized, I’m yet to hear of it. If there has ever been a story conclusion more heartbreakingly beautiful and thought provoking as he one featured in Bioshock: Infinite… I don’t want to know about it. That would just be too much for one human mind to take.

Above all else, it’s immediately apparent how much love has been poured into this game from every single person working on the project. In return, gamers around the world are giving a lot of love back to Irrational Games.

Perhaps this is an important take-home message other AAA developers can learn from.

*This is a guest post, the views expressed are not necessarily those of the management.