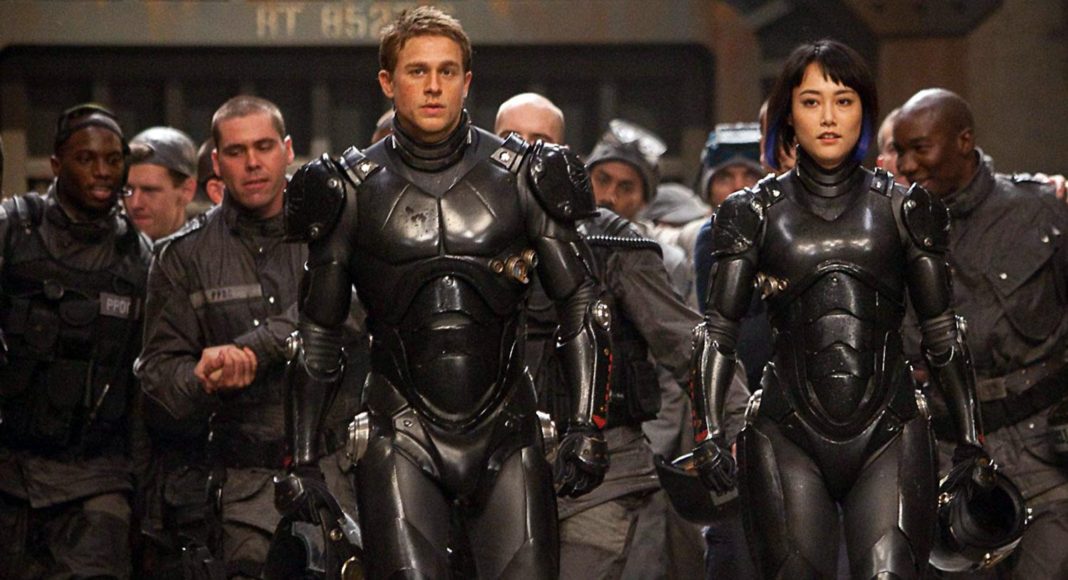 With Guillermo del Toro at the helm, it might seem that a Pacific Rim review would serve more of a purpose, but it turns out that the effort lands in the same category as a review of a Transformers film. If there’s a fair chance you’ll like it going in, you probably will (in fact, you’ll love it), and you’d be hard-pressed to talk anyone into or out of it.

It’s giant robots fighting giant, godzilla-esque monsters, and summer, popcorn, check your brain at the door extravaganza could hardly have a more suitable champion. But, knowing del Toro, you might expect a little something more among the usual ingredients. If so, you’re going to be disappointed.

It’s the future, and 30-story monsters have started popping through a dimensional gate at the bottom of the Pacific. By the end of the film we’ll be some 10 years deep into the “war” against these creatures, and their appearances will become ever more frequent. After a few monsters were put down, at great expense and loss of life, the world finally came together to create said giant robots to continue the battle. The trick to these is that a unique technology was required in order to pilot them. Proving too much for one brain to handle, these giant robots require two pilots, and they have to enter a kind of mind-meld state called the drift.

We enter the film as Raleigh Beckett (Charlie Hunnam – Sons of Anarchy) and his brother are heading out to take on yet another monster. As Raleigh points out, at this stage in the game we had become quite good at putting the beasts down. But, the surprise we have in store for us is that these monsters seem to be adapting, and Raleigh loses his brother and barely escapes with his life.

Fast forward five years, and we meet up with Raleigh working on the massive wall being constructed to keep the monsters away from land. It seems these days our robot warriors are falling much more frequently, and the monsters are popping up on a weekly basis now. Things are so bad in fact, that the U.N. leaders are declaring the giant robots a failed effort, and are going to scrap the project in favor of other possibilities, including the big, stupid wall they are building. 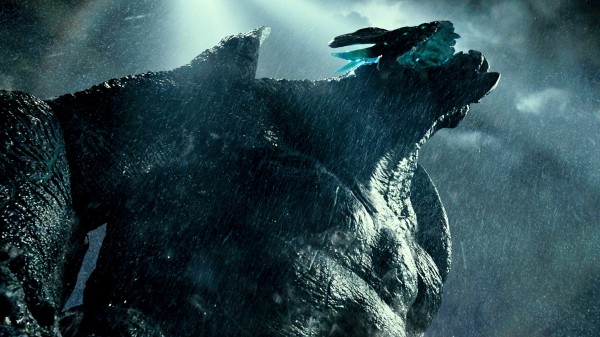 That announcement means project leader Stacker Pentecost (Idris Elba), has one last chance to prove… whatever, while our robots coordinate protection for the wall construction. That means he needs the best pilots he can get, because he has a big plan. And that means he wants Raleigh back in action. See, it all fits into place just so.

There is a sense in which we include sub-plots into the general monster-smashing scheme – Pilot coordinator Mako is the adopted daughter of Stacker, and she wants to suit up, two geeky scientists are working in extraordinarily geeky ways to find that last bit of information that changes everything at the last second – but, they are largely wastes of time. They shouldn’t be, and for those who are serious fans of giant robot cartoons or Godzilla films, they probably add a certain special something to the overall product, but they detract from the films abilities. They are actually great points to serve as examples of the overall flaws (or wondrous achievements) of the film, because they are such clear offerings to the fanboy gods. They serve no function, and someone as talented as del Toro surely wouldn’t have them show up, except that they are required of the “All in” mentality behind the film’s construction.

On the positive side, there is a kind of respect one may have for the daring it takes to create something so focused. Unfortunately, the film has to exist in larger realms, and few viewers are going to be swayed by the idea that it isn’t that you’ve failed to make a good movie, but instead succeeded at stupidity creation.

Despite my entrance to this review, there are some out there who might jump on board the giant whatever vs. the giant whatever else film… if it’s good. Notable particulars in that investigation might include things like plot, dialogue, pacing, and originality. For all that it cannot be denied that Pacific Rim looks gorgeous, and has more “really awesome smashing” than could be expected of any movie, it falls lifeless if you are among those that will care about any of these other elements. 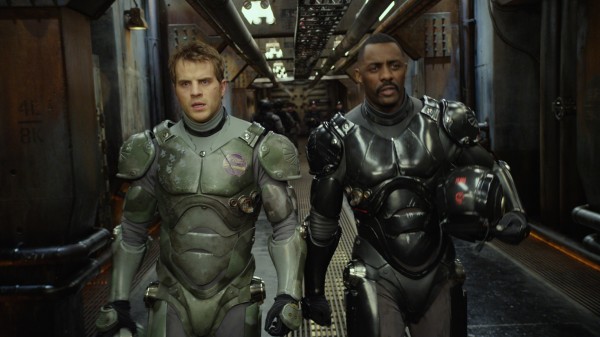 The characters and dialogue are cut-and-pasted from dozens of other films (wherein they were cardboard cliches already), most of them taking place in High School and/or Saturday morning anime crossover titles from the ’80s. There is a natural limit to what one probably has a right to expect from the genre in this area, but here we’re at a rung so low that even imagining the lack of effort is painful. The more the film has a plot, the less it has one, because whenever anything “happens,” it is so nonsensical that it only makes you think about how nonsensical it all is. Stupid premise sure, but you can’t spend all your time finding new ways to shout how stupid the premise is.

Somewhere there exists a place for movies that are simply going to become the pinnacle of a narrow genre. It is a place where a director might say, “Some people love these movies, and I’m going to make one they will love.” del Toro has bypassed this sort of effort, highlighted the worst bits, and ultimately come to a place where all he can say is, “If you love this movie, you will love this movie.” And, he’d be exactly right.

Syfy can be pretty hit or miss, especially for any single viewer, but 12 Monkeys is among its recent efforts to really up its game, and this one works awfully well.
Read more