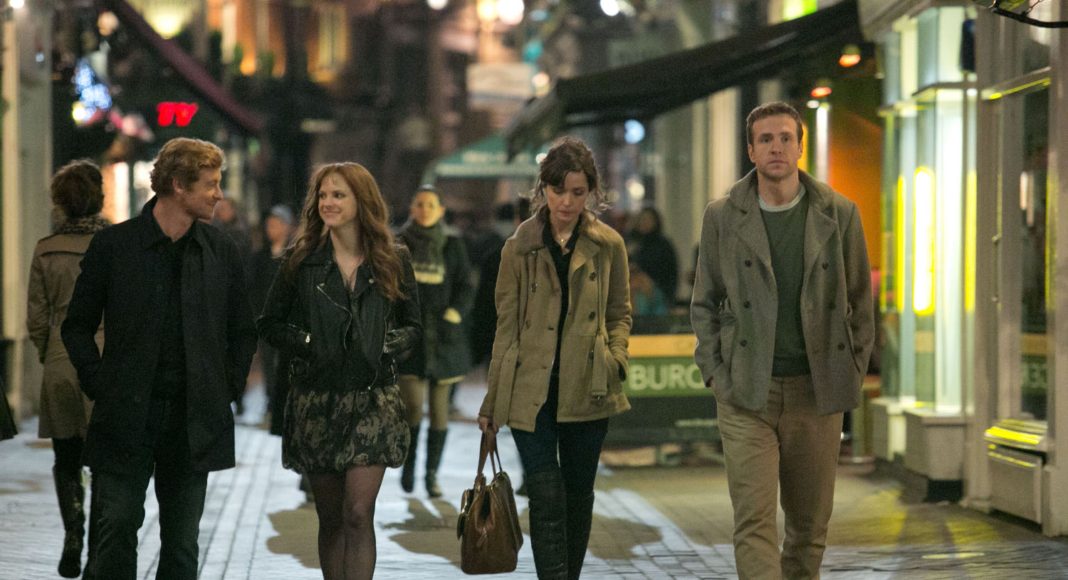 I Give It A Year Review – Modern Romantic Comedy Isn’t

Dan Mazer may not have directed feature films prior to indie gem I Give It a Year, but the long-time Sacha Baron Cohen collaborator isn’t new to the business. Writing and/or producing most of Cohen’s recent work (or co-writing, or whatever), Mazer has been around, but his pedigree won’t give you a solid indication about where I Give It a Year is going to take you.

Nat (Rose Byrne) and Josh (Rafe Spall) are newlyweds, and we meet them at their wedding. They’re deliriously happy, although Josh’s always inappropriate friend, Danny (Stephen Merchant) is already setting the stage for laying out the myriad difficulties that are inextricable from the melding of lives.

As it becomes clear that, love and infatuation aside, Nat and Josh just don’t have that much in common, we (and they) have to start wondering where things go now. At the end of the day, not taking out the trash is still annoying, as is constantly singing the wrong lyrics to every song on the radio, and when there isn’t something working to dissolve away the import of the irritants, they are soon all there is to the relationship.

Worse, as we approach the one-year anniversary, we find that our couple does not exactly mesh well with either set of in-laws, and other interests make their way into Nat and Josh’s world. Guy (Simon Baker) is a new client of Nat’s, and he quickly falls for her, possibly in large part because she forgets to tell him that she’s married. On Josh’s side of things, his old girlfriend shows up, and it turns out they never officially broke things off.

It’s always complicated, but I Give It a Year takes a different look at what we do about those complications, and possibly what we ought to do about them. What is it really that makes that irritating personality quirk so irritating? What do we make of our friend couple – Hugh (Jason Flemyng) and Naomi (Minnie Driver) – who openly profess to hate each, and apparently everything about each other, but have no problem reconciling that with their claim to love each other outrageously? Where exactly are the lines in the spectrum of people who are happy together, and how do Nat and Josh find their way back into a zone they can live with?

It’s ultimately an anti-romantic comedy in some sense, especially considering that our love story is moving in the opposite direction, but it feels in touch with the times, and even if it doesn’t exactly blow the doors off of any boundaries, there’s a daring quality to the effort to detail the life and times of people who find themselves together (married or not) and then aren’t so sure they’ve made the right decision. It isn’t so much that Nat is attracted to Guy, that’s a Lifetime Movie. It’s dissecting why she’s attracted to him, despite a certain realization that he probably leaves the cap off the toothpaste and the toilet seat up as well.

We, like Nat and Josh, are predisposed to wonder where the magic has gone, but in some dizzy twist on Nietzsche, we somehow shy away from asking the most difficult questions by way of some assumed societal norms – for example, is it perhaps that the magic is actually supposed to wear on, and how the hell does that happen?

This is perhaps to give the film too much credit, but I’m not so sure. This is a different road than we’re used to – a falling out of love soliloquy – and even if it stumbles through parts to make sure that we at least keep the “comedy” in “romantic comedy,” it’s after a very interesting punch line.

It reminds one of The Beautiful South, and the two songs that hit separate albums – I Love You (But You’re Boring) and I Hate You (But You’re Interesting). More than just a casual, entertaining romp through a love story, why not actually try to figure out what any of those things mean? Perhaps, if you haven’t figured out who you aren’t really in love with, you’ll never know who you should spend the rest of your life with… perhaps.

I’ll spoil things for you, this is a movie that doesn’t actually know what the hell it’s talking about, any more than any of these characters do, but it’s honest about it. More importantly, it has far more interest in the idea that people are fundamentally stupid, as opposed to creatures that fit well into molded scripts, and yet, somehow, they often figure things out. That’s a story worth your time.

I Give It a Year Trailer