On September 17th, SNL‘s Andy Samberg is going to try to sell you on cop comedy, and it’s about as tough a game as coming up with a Brooklyn Nine-Nine Review. I suspect he’s going to manage it, but it’s the kind of show that you’re going to want to know what you’re in for. You have to go a long way to find something worthy of comparison that doesn’t make this show sound like Scrubs P.D., and when you go that far back, the comparison may not make a lot of sense.

In a recent interview, show creators Dan Goor and Michael Schur (of Parks & Recreation – which gives an idea of the feel) mentioned Barney Miller, and that’s actually the best show I can think of to try to put Brooklyn Nine-Nine in a neat cubby, but that needs some explanation in itself. It’s Barney Miller, if you brought it to 2013, kicked off with two very recognizable main “names,” and went outside a lot more. Old school television is probably not the sort of thing networks want overly attached to their “young” and “fresh” comedy, especially when it comes with its own SNL, thus college-aged, hook, but Barney Miller was pretty screwball at the time. It may have been a dryer sort of comedy overall, with Hal Linden’s deadpan and Steve Landesberg’s unwavering calm and bookish responses providing most of the best work, but the circumstances were undeniably wacky.

Brooklyn Nine-Nine, much like Scrubs, puts the wackiness into the characters, largely Samberg’s Jake Peralta, a great detective who has never grown up, and is equally committed to capturing bad guys and screwing around, and can’t do either without tossing zingers out every few seconds with little regard for where, or if, they land.

The show kicks off with a new captain taking over the old Nine-Nine, and Captain Holt (Andre Braugher) isn’t what this crew is used to. Holt’s by-the-book, or at least that’s how he’s playing it, and Peralta is going to have a difficult time reigning himself in, if he even convinces himself to try.

Barney Miller rather famously played its characters’ “types” at audiences (brainy copy, brawny cop, holding on until retirement cop, writing a book/fashion conscious cop, etc.) and the pilot for this one makes it clear we’re moving in a similar direction. Goofy cop, straight arrow who has to prove herself cop, klutzy/hard-working cop, scary cop, and the list goes on, each with their own ability to throw a monkey wrench into things when necessary. Captain Holt has to find a way to manage this oddball crew (and really, aren’t they all oddball crews?), because he isn’t going to fail at his first command.

The writing is actually pretty strong, but like I said, you have to know where you are. This is light, goofy fare, and the criminal chases exist only to throw out gags (Get out of the way… or, just keep shopping and completely ignore me.) just like everything else. Peralta may catch criminals, just like the Doctors on Scrubs may save lives, but you don’t want any of them to show up when you need something.

What’s most surprising, is that the thing is actually funny. That’s surprising only because it doesn’t sound like it will be on paper… to me. Samberg has a certain charm, and when he isn’t pushing too far, as he does a couple of times during the pilot, he’s incredibly engaging. Braugher, though we may be surprised to see him in comedy, is as good as ever, and every moment he’s on screen makes you a little more sure of the show’s potential.

Of course, the show has some rough spots, and some hurdles that may be tough to get past. Comedy pilots are nearly impossible, with the amount of establishment you have to give time to while still showing off that you’re going to be funny, and this is a show that highlights the difficulty.

One of the main problems for a viewer is having any idea where this one is going to land going into further episodes. Is it going to be this slapstick play with Samberg finding new ways to nyuk-nyuk at us every ten seconds, or are we going to rely more on the variety of the entire cast?

Among the other tricky points –

Chelsea Peretti‘s character is misused and too far over-the-top. She even has some good lines, but she’s made to overplay everything to the point that she just isn’t fun to watch. This leads to a poor response when she shows up later. She’s outlandish and separated from the rest of the crew in an almost Mary Katherine Gallagher way that makes you suspect everyone makes sharp turns when they see her coming.

Melissa Fumero, who is quite good actually, brings to the show the potential stumbling block that, while thirty-something, she looks like she’s in High School. Coupled with Samberg’s rather boyish looks, and the entire theme of the show being Peralta’s inability to act like a grown-up, and some viewers may get the feeling their watching season eleven of Doogie Howser P.D.

Joe Lo Truglio is great so far, and may end up one of the show’s standouts. Not exactly a bad point now, but his character smacks of that which could quickly go wrong, as week after week we just watch him trip over stuff, drop his gun at inopportune times, and drool over the other officer he’s infatuated with.

That brings us to the officer he’s infatuated with, Stephanie Beatriz’ Rosa is the “scary cop,” for lack of something better. She’s opinionated and tough as nails. She’s also the best potential the show has. She already takes over not only the scenes she’s in, but the scenes we think she might be in. You watch along hoping she’ll turn up, and that’s a rare trick for any show to manage, much less a pilot. The fact that the writers have put this character together, and stuck it into this show, is the best predictor you’re going to get for how things will play out. 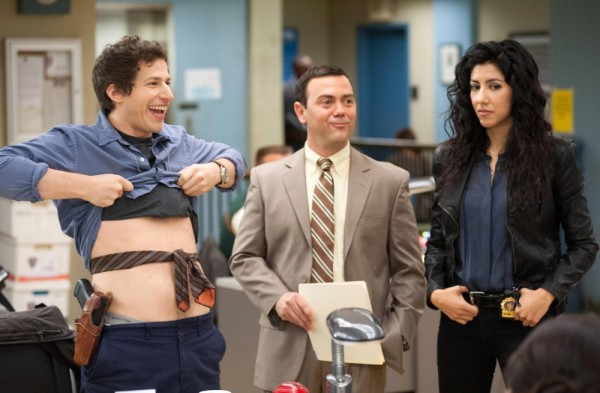 That isn’t just because she’s a woman who is a tough character, but because this is very clearly not simply the “tough character” and we got an actress to play the role. She’s her own, and in a show that actually pokes fun at the dialog television characters use (“You’ve really thought about that answer.”), they have clearly made an effort to balance the gags and jokes with a lot of time to wonder what their characters would really say. More surprising they play with the idea (because it’s goofy comedy, and you can only go so far) of being true to them by letting them act how they would act, even if that means quite a bit of time that you aren’t laughing.

In the end, I don’t know that you’ll laugh out loud. It mostly isn’t that sort of funny. It has some decent moments though, and it’s more about the mix than the joke, even if it seems like it’s working in a lot of jokes. I have a feeling this one is going to settle a bit after a couple of episodes, and we will move a bit away from banging heads on counters and wearing a Speedo.

The rating is mostly for potential, with the slightly lower “show” rating being more of an assessment of the pilot on its own (which is silly and makes no sense). If this goes the right way, this could take off in a big way, but you’re going to need to know where we are in episode six to really understand the show’s effort. You should definitely check it out when it comes around, because a month later you may have your new favorite.

From Emmy Award-winning writer/producers Dan Goor and Michael Schur (“Parks and Recreation”), and starring Emmy Award winners Andy Samberg (“Saturday Night Live”) and Andre Braugher (“Men of a Certain Age,” “Homicide: Life on the Street”), BROOKLYN NINE-NINE is a new single-camera ensemble comedy about what happens when a talented, but carefree, detective and his diverse group of colleagues get a new captain with a lot to prove.

Detective JAKE PERALTA (Samberg) is gifted enough that he’s never had to work too hard or follow the rules too closely. Perhaps because he has the best arrest record among his colleagues, he’s been enabled – if not indulged – throughout his entire career. That is, until the precinct gets a new commanding officer, Captain RAY HOLT (Braugher). Captain Holt believes in rules and regulations, two concepts that have long been overlooked by the detectives in the 99th precinct.

Jake’s colleagues are a brilliant and capable bunch, but lack a certain level of discipline and leadership. They compete with each other, annoy each other, gossip and flirt, but at the end of the day, they have each other’s backs. As the precinct’s honorary straight arrow, Detective AMY SANTIAGO (Melissa Fumero, “One Life to Live,” “Gossip Girl”) is thrilled with the leadership change. Having grown up with seven brothers, Amy is extremely competitive…about everything. She is hell-bent on collaring more criminals than Jake, and she’s keenly aware of how many arrests she needs to close the gap. Holt’s next-in-command is Sergeant TERRY JEFFORDS (Terry Crews, “Bridesmaids,” “Everybody Hates Chris”), a linebacker of a man who’s lost his nerve after his wife had twin baby girls – Cagney and Lacey – and he lives in fear of not seeing them grow up.

Also working cases in Brooklyn’s 99th is Detective CHARLES BOYLE (Joe Lo Truglio, “Wreck-It Ralph,” “Superbad”), who idolizes Jake and is the precinct’s workhorse; he’s not brilliant, he’s not physically gifted, but he tries harder than anyone else. Charles pines for the vocally opinionated Detective ROSA DIAZ (Stephanie Beatriz, “Modern Family,” “The Closer”), with whom he stands no chance at all. Rosa is simultaneously tough, sexy and scary as hell.

Meddling in everyone’s affairs is GINA LINETTI (Chelsea Peretti, “Parks and Recreation,” “Kroll Show”), the eccentric and self-absorbed civilian office manager. Together, they interrogate suspects, arrest perps and solve murders. But, ultimately, BROOKLYN NINE-NINE is a workplace comedy that’s not really about the job. It’s about the men and women behind the badge – singing karaoke, grabbing a beer, and dabbling in each other’s personal lives– all while protecting the fine people of Brooklyn.