Iron Man 3 is hitting on September 24th, and what would Iron Man be without Jarvis, or maybe a Jarvis App, doing the heavy lifting in the background? And, what would a huge home video release be without some gimmicks that hope to get you jazzed up for it?

The App actually offers a fair amount to play with, but the sell is really the” second screen” abilities that give you control over the Blu-Ray (once you can get it), and unlock some special treats. By the way, that includes voice control.

You also get the opportunity to have Jarvis take over a variety of ringtones on your iPhone, although this comes by way of having to email yourself through the App, and then go through some shuffling with iTunes, but still, they’re rather cool.

The App also has some “personal assistant” features, like telling you the weather, setting alarms and reminders, and other snazzy things that, let’s face it, you aren’t at all likely to use.

On the other hand, having a Jarvis App is its own reward, and if you’re a fan of Iron Man (sure, I have the ringtone on my phone), there’s no reason to miss a free tie-in.

Create customized alarms to wake you in the morning, download ringtones, check the weather, post to Facebook and more! Sync the app to your Blu-ray™ player to unlock hidden files and suits embedded throughout the disc, and experience the first-ever voice controlled Blu-ray! 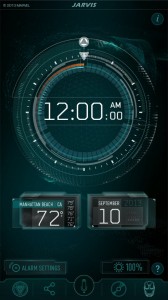 In Marvel’s “Iron Man” series, JARVIS is Tony Stark’s artificially intelligent computer system and serves a multitude of functions. JARVIS is programmed to speak with a male British accent and is voiced in Marvel’s “Iron Man” and “The Avengers” series by actor Paul Bettany (“A Beautiful Mind,” “The Da Vinci Code”).

App Overview: Ever wonder what it’s like to be Tony Stark? Download the one-of-a-kind, interactive experience app hosted by JARVIS to your iPad, iPhone or iPod and find out. Just like the real JARVIS, you will be able to interact with him using your own voice. Create customized alarms to wake you in the morning, download ringtones, check the weather, post to Facebook and more! Sync the app to your Blu-ray™ player to unlock hidden files and suits embedded throughout the disc, and experience the first-ever voice controlled Blu-ray!

App Features: Activate JARVIS through a simple setup process and get ready for an entirely new Second Screen Experience. JARVIS will literally be a part of your daily routine. Browse through all 42 of Tony Stark’s Armors in the interactive Armor gallery. Gain access to exclusive content as well as be able to control the Blu-ray menus with either a digital remote or simply by using your voice. “Marvel’s Iron Man 3” will be available on September 24, 2013. The full list of Iron Man 3 Jarvis: A Marvel Second Screen Experience functions are as follows.

Verify that your iOS device and Blu-ray player are connected to the same Wifi Network.