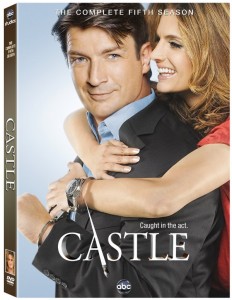 If you’re in the market for the fifth season DVD of Castle, you don’t really need to be sold, and if you aren’t, you should get there, despite the fact that I’m going to tell you that it wasn’t the show’s best season.

I’ve been a fan since the beginning (check out the original show review here), but the fourth and fifth seasons have not been quite as solid for me as the first three. The latest season still pulls you along, maintains most of the fun, and has some interesting cases, but it heads down a tricky road in some respects. Still, as far as I’m concerned you have to take that in the best possible light. It doesn’t change the fact that it’s one of the better shows on television just because it isn’t quite as good as it used to be.

Castle, built almost entirely off the charm of Nathan Fillion (and after a certain progression, Stana Katic’s as well), wound through its first couple of seasons content with the surprise popularity it had managed, and avoided the pitfalls that both: other shows seem unable to avoid, and are built into the format and situation.

Mainly, the show didn’t play around much with long arc dramatics, and left the romance angle simply to the “Castle flirts with Kate a lot,” realm. Almost in self-defense, the show has picked up both of these angles and, to one degree or another, exploits them somewhat shamefully, and to the show’s detriment.

Of course, you just can’t have this show go on this long without fans clamoring for something to happen with Castle and Kate, even if it is only by way of them both marrying other people and dropping it altogether (which would irritate to many people), so you have to give some leeway there. We perhaps don’t have to play it up exactly the way we do, especially as we enter the fifth season and find them opting for the old “we’ll keep it a secret” gag. That’s a well too often visited, and largely an excuse to bypass ten minutes of writing per episode, because we can just throw in some uncomfortable tension as we dance around subjects.

On the other side of things, the show has been cultivating and experimenting with long arc plots for a while, and it isn’t giving up on the idea. This is also one of those unfortunate truths of television that comes with a show’s age. Eventually we’re going to run out of episodic stories we’re in love with, or don’t seem too close to cases we’ve already worked, and long arcs give you a chance to dig into characters. They also give you the opportunity for handy cliffhanger moments.

Overall, the show is still a winner for most fans, and I don’t think we’re to the point that people are going to start tuning out, but it’s one that needs to make sure it is playing to its strengths going forward, and not just churning out episodes.

A highlight of the fifth season was taking some time to explore other characters in more than a cursory fashion, and letting them have their own moments in the sun. The show needs more of that, especially since Javier Esposito and Seamus Dever have been solid, and underutilized in previous seasons.

It’s still one that is worth purchasing, and it still sits close to the very top of the pack when it comes to crime-related shows that have the ingenuity to do something more interesting with the genre.

As far as the DVD release itself goes, the video is up to par with recent releases, with no real cause for anyone to complain. It might not be the best release you’re going to get this year, but any slight flaws are virtually unnoticeable, and should be no problem for most.

The bonus front is a mixed bag like no other. Fans are going to appreciate the commentary tracks that are available on a few episodes, especially where Nathan Fillion is involved. He’s brilliant and hilarious, and knows how to keep a commentary interesting.

You also get a few deleted scenes and bloopers, which are what they are, and you know just how much you’re going to get out of them. There isn’t anything real special, though bloopers with Fillion are always a bit above the norm.

On the not necessarily all that interesting side, you’ve got a featurette guiding us through the dress rehearsal of the staged murder play from Castle’s birthday surprise. Now, this is a bit of a worthwhile look, but only because it relates back to Castle’s birthday. It’s an odd feature, though some may enjoy it.

In a truly bizarre move in the bonus feature realm, we also have one where Vern Yip walks us through Castle’s loft, and to a lesser extent shows off other sets involved with the show. Here’s one to love or hate. Some people are clearly going to find this awesome, while others will suspect a misprint and/or never watch it. You have to love the commitment to the show’s own odd character though, and the frequent, “I don’t know, let’s throw this out and see what happens” approach. It’s actually pretty fun, but it’s definitely a little out there as you digest it.

Finally, we have another quick featurette that showcases the training the actors go through in order to believably portray cops. Well, or something. That’s more or less what it purports to do anyway.