You may recall that when we reviewed The Croods in our podcast, we were somewhat lukewarm about it. Looking back, it seems that was largely a result of the hope and expectations it managed to bring in the first 30 minutes, that never seemed to completely come together.

Strictly as a family effort though, this one has a lot going for it, including massive appeal to the actual target audience.

The hit film about a family of cavemen, which rather awesomely gives over the reigns of bravery to daughter Eep (Emma Stone), has as its best feature a complexity that rewards repeated viewings. Anything but a simple, wild romp with bizarre creatures, dangers, and the requisite amount of slapstick, The Croods is a layered conversation about growing up, parenthood, and family in general that is easily superimposed over any family… ever.

Eep quickly introduces us to her family, and patriarch Grug’s (Nicolas Cage) endless set of rules that have kept them alive this long. The rules ultimately amount to his favorite generalization, “Never not be afraid.” But, Eep is curious, and has all the fascination with life and possibility of any late teen, and when Guy (Ryan Reynolds) wanders into her life – with fire! – she can’t keep from exploring. That leads to Guy’s big news, and a huge change for our family. Guy knows that the world is going a little crazy, what with lava everywhere and mountains falling down, and the family cave is soon destroyed.

Now we’re forced on a journey into the unknown, and we have to figure out how we’re going to survive, and there’s a choice to be made. Grug’s overprotective smash and hide approach, or Guy’s hopeful effort to figure things out.

There are a few rough spots in the film, but there are also some great scenes, and a lot of fun. Plus, there are a few scenes that are not only surprisingly dramatic and laced with emotion, they seem to nevertheless be scenes that resonate with the younger crowd.

Available through iTunes, and other digital media providers, the Digital HD release is staggeringly impressive, and no matter what anyone tries to sell you, they aren’t all this good. Serious quality on an iPad, or similar device, is trickier than it seems, and not everything comes through in a lot of translations. Frankly, when you’re watching a TV show, you probably don’t care, but when you’re looking to watch a feature film on the go, you want the best experience you can get.

The clarity is wonderful here, and even for an animated feature, there are a lot of complex and/or difficult scenes, including some that are extremely dark, and those that have a lot of elements going on in the background. These are places you often notice the flaws in the quality, and the look great in The Croods.

The Blu-Ray and other packages have a lot of bonuses (see below), but this is one that turns up the possibilities by making the digital release so good.

Blu-ray™ Deluxe Edition and DVD are Packed with Croodaceous Content!

Get THE CROODS on Digital HD™ Two Weeks Early!

Dun Dun Dahhh! Lauded by critics as “the first great animated film of 2013” (Pete Hammond, Movieline), Twentieth Century Fox Home Entertainment announces the blockbuster hit, DreamWorks Animation’s THE CROODS, will debut on Digital HD™ on September 15 and Blu-ray 3D™, Blu-ray™ and DVD on October 1. “An instant animated classic,” (Jake Hamilton, FOX-TV), THE CROODS promises to bring the whole family together “from 4 to 104” (Sam Rubin, KTLA), to delight in “stunning visuals, humor and heart,” (Jim Hill, Huffington Post) as the world’s first family embark on an unforgettable adventure. The Blu-ray™ and DVD are chock full of fun bonus material that will bring the vibrant, amazing world of THE CROODS home for the whole family to enjoy. The perfect treat for kids of all ages, THE CROODS Blu-ray™ and DVD comes with a lovable Belt plush toy for a limited time only.

Join the Croods on the journey of a lifetime in the epic comedy-adventure that “has the magical wonder of How To Train Your Dragon” – Jake Hamilton (Fox-TV). When their cave is destroyed, the Croods set out to explore a spectacular landscape filled with fantastic creatures, strange surprises…and a whole new world of adventure!

Written and directed by Chris Sanders (Lilo & Stitch) and Kirk DeMicco (Space Chimps), THE CROODS is “an Animated Avatar,” hails Bill Bregoli of CBS News and is the must-see animated film of the year! Fans of all ages will be cracking up for the adventure everyone loves. Led by an outstanding voice cast featuring Oscar®-winner* Nicholas Cage, Golden Globe®-nominee** Emma Stone, Ryan Reynolds and Oscar®-nominee*** Catherine Keener, the Croods invite your whole family to travel back in time and discover their world.

The purchase of the Blu-ray™ or DVD unlocks additional content on THE CROODS Coloring App, which allows children to color their favorite characters and scenes from the film, add text and voice to the story, and then share their storybook on their TVs at home. Also on the Blu-ray™, families can join Guy, Eep and Belt as they introduce the crazy “Croodaceous Creatures” – the striking and unique animals from the film – and much more. And for a limited time only, any purchase of the Blu-ray™ or DVD comes with a lovable Belt toy! Dun Dun Dahhh! Pre-order today!

The Croods Blu-ray + DVD + Digital Copy Deluxe Edition include a Belt plush toy for a limited time and more than an hour of bonus features: 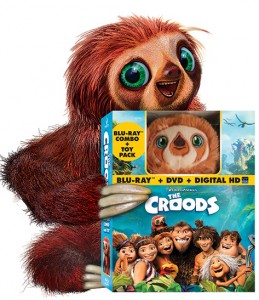 ● The Croodaceous Creatures of Croods! – Find out more about your favorite Croods creatures!

● Be An Artist! – Now you can draw Belt, Macawnivore and Mousephant

The single disc DVD includes a Belt plush toy for a limited time plus the following: