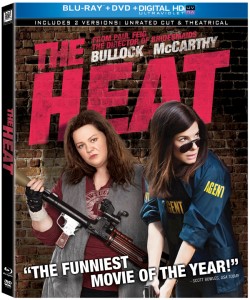 The Heat Blu-Ray is available, and I’ve got a copy for you.

It may be safe to say that Sandra Bullock is having the best year ever, certainly the best month, with Gravity in theaters, and The Heat available for home viewing. This one made quite the splash earlier this year, and critics can’t say enough good things about Gravity (well, I’m not quite as sold on it).

You do have to love this one though, even if only for the sake of the female buddy cop picture hitting theaters so hard.

If you know Paul Feig (Bridesmaids), you may have a good idea what’s in store with this one (if you haven’t seen it already), but to tell the truth, much like the case with Bridesmaids, I’m not sure the trailers did this one justice. There’s more going on here than just the foul-mouthed butting heads with the crass and uncouth. Some moments are as wild as you’d expect, but there’s a fair amount of complexity as well, even if it is just aiming at a crazy, fun ride.

Plus, this is a Blu-Ray effort that’s loaded with features that anyone who liked the movie will enjoy. Chief among them are five commentary tracks that will blow you away, including the original Mystery Science Theater  3000 guys!

Take a look at the full list of features below, and enter to win your very own copy of The Heat Blu-Ray!

*Best Performance by an Actress in a Leading Role, The Blind Side, 2009

**Best Performance by an Actress in a Supporting Role, Bridesmaids, 2011

● Theatrical and Unrated versions of the film

● Welcome To the Bonus Features!

● All The Stuff We Had To Take Out But Still Think Is Funny – Deleted, Alternate & Extended Scenes

● How THE HEAT Was Made