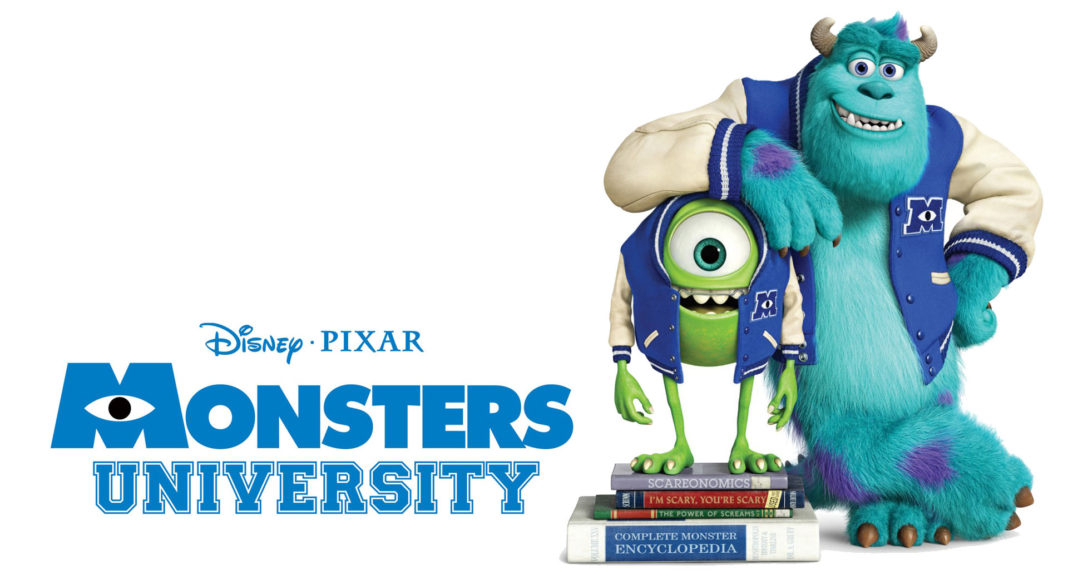 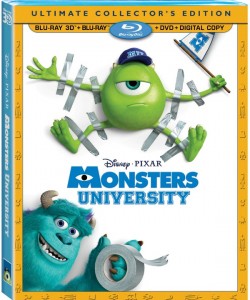 Monsters University managed a strangely subtle debut for a Pixar film, earning neither the high praise of most of their works, nor the backlash of Cars 2. Instead, the film was met with medium reviews, a lot of happy kids, and a very curious feeling of nostalgia for characters that aren’t actually all that old.

By the way, check out our Monster University podcast review for an expanded take on the film itself.

Our favorite monsters are back, but this time Mike Wazowski and Sully are headed to school, and we enter the picture before they’ve even met. Going back to a time when our best buds and co-workers don’t know each other, and are very different monsters, means the doors are wide open to introduce new characters, new parts of the universe, and we have a lot of options for figuring out just how they ended up as the top scaring team at Monsters Inc.

It turns out that it was a long and winding road, and we not only address the situations that built such a friendship, but the fact that ultimately Mike doesn’t seem particularly scary. A University that teaches monsters how to scare might seem pretty straight-forward, but the film builds in plenty of complexities, both those that follow University life in some general sense (transcending human/monster norms of the establishment), and those that are rather unique to the idea of throwing together such a varied set of individuals.

Before long, Mike and Sully are actually at odds, with Mike having to prove himself far more than most, and Sully riding along the coattails of a pedigree. Mike has the brains, because there’s a lot to learn if you want to get a scare just right, and Sully has the natural talent. It all comes together when the University’s scare competition is on the line, and less than fortuitous events throw our pair together. Unfortunately, the overall scheme is a little too familiar, and trying to get through the hurdles that set us up for the finale slows us down. The film doesn’t deliver on the charm and magical spectacle of the first, possibly by design, and though it is full of fun, it isn’t quite at the same level.

The bonuses are in line with other Pixar offerings, in a general sense, but there isn’t a whole lot that the kids will jump for joy about. Actually, that’s becoming the norm, so perhaps it isn’t exactly something that distances this from other Pixar releases. Among the best pieces are the commentary track, Welcome to MU featurette, and the Story School featurette. As you might imagine, commentaries are going to be quite different for an animated film, and this one gives just the right mix of detail, story development insight, and fun. It’s a tricky job, and this one is entertaining and informative.

Welcome to MU shows off the construction of the University itself, and gives you an idea of how much really goes into something that doesn’t seem like it ought to be that hard. The looks at the wide variety of projects and problems really take you in-depth, and shows off just how amazing it really is to produce a film like this.

Story School is just what you might expect. We get a lot of angles on getting all the pieces together, and hopefully making them work just right. Whether it’s the creation of a gag, or the molding of the characters and their development, you get quite a bit of insight here. This is possibly the sort of treat that can only deliver as well as it does when you’re examining something that is years in the making.

Several other bonuses deliver a lot of real value to the purchase, including a featurette on the music, the history of hair/fur in animation (seriously), and the deleted scenes, and especially a featurette on color and light. All of these technical bits are quite interesting, but again, not for everyone (especially kids, who probably won’t care). Most of the rest are of the ever-more-standard “Pixar is really cool” variety. These bonuses were pretty interesting at one point, as when we previously had special features that were really just tours of work environment, but they’re getting a bit old for me.

Scare Games is a featurette detailing the games Pixar put on with different departments squaring off against each other. Campus Life is similarly a day in the life of the crew. They are somewhat interesting, but it’s enough already. You also get the short The Blue Umbrella, as is the natural standard of including the shorts with Pixar films, and this one is really cool. Not quite up there with some of Pixar’s best, but a fun short nonetheless.

Overall, the movie isn’t quite a shining star for Pixar, but the kids will love it. The release is packed, but the benefit of the bonuses is a little suspect. Still, it’s hard not to recommend owning any Pixar release.

[toggles behavior=”toggle”] [toggle title=”Official Synopsis, Release Info, and Bonus Feature List”]   After scaring up big laughs in theaters, the in-home release of “Monsters University” opens its doors to the movie in stunning high definition Blu-ray, and provides hours of all-new bonus material, in-depth behind the scenes features, deleted scenes, the animated theatrical short “The Blue Umbrella” and much more.

Directed by Dan Scanlon (“Cars,” “Mater and the Ghostlight,” “Tracy”), produced by Kori Rae (“Up,” “The Incredibles,” “Monsters, Inc.”), and written by Dan Scanlon and Robert Baird & Dan Gerson (“Monsters, Inc.”), “Monsters University” marks Pixar’s 14th consecutive film to debut at number one at the box office. Ever since college-bound Mike Wazowski (voice of Billy Crystal) was a little monster, he has dreamed of becoming a Scarer—and he knows better than anyone that the best Scarers come from Monsters University (MU). But during his first semester at MU, Mike’s plans are derailed when he crosses paths with hotshot James P. Sullivan, “Sulley” (voice of John Goodman), a natural-born Scarer.

The pair’s out-of-control competitive spirit gets them both kicked out of the University’s elite Scare Program. To make matters worse, they realize they will have to work together, along with an odd bunch of misfit monsters, if they ever hope to make things right. “Monsters University” bravely explores themes of self-discovery and the revelations that come with growing up. Joining Crystal and Goodman as part of “Monsters University’s” monstrously talented voice cast are Steve Buscemi (voice of Randy Boggs), Helen Mirren (voice of Dean Hardscrabble), Alfred Molina (voice of Professor Knight), Charlie Day (voice of Art), Sean P. Hayes (voice of Terri Perry), Dave Foley (voice of Terry Perry), Nathan Fillion (voice of Johnny Worthington) and Aubrey Plaza (voice of Claire Wheeler). Featuring a score from recent Rock and Roll Hall of Fame inductee and award-winning composer Randy Newman (“Monsters, Inc.,” “Toy Story 3”), MU also includes music from Axwell and Sebastian Ingrosso of Swedish House Mafia.

Bonus Materials Overview for These Products:

• Campus Life – What’s it like being on a production crew at Pixar? Get a look at a day in the life of the “Monsters University” crew through their own eyes.

• Story School – This documentary examines the challenges of creating a prequel as well as themes that run through the story, and the change in focus from Sulley to Mike. We’ll also look at how gags are developed – from writing jokes to brainstorming a million ideas, only 5% of which actually end up in the movie.

• Scare Games – At Pixar, we play hard while we work. The same people who keep the film production moving – producers, managers, coordinators and artists – are also the ones who bring spirit and excitement to some of our extracurricular activities. We check out the MU production teams as they go head to head in the mostly playful Pixar Scare Games competitions.

• Welcome to MU – Sets aren’t just buildings, they are the worlds our characters live in and explore. This look at the Monsters University campus and its development is told from the perspective of the artists who created each piece of the campus from the architecture to the ivy leaves. .

• Music Appreciation – Randy Newman’s scores are a mainstay of Pixar films, and this documentary will give you a privileged look at his creative process. We follow the “Monsters University” scoring process from spotting to writing and on to the scoring session. including special college-themed recording sessions.

• Scare Tactics – Animators are actors who digitally bring the characters to life. In this look at how the MU animation team worked, you’ll see their process of how they channeled their own monster-selves and created moments on screen that were really funny, really scary and also really serious, sometimes all at the same time.

• Color and Light – How can a single painting set the tone for an entire scene? We’ll look at the creation of the colorscripts and how they were realized technically in the final film. Along with the process, this piece explores the many layers of technical innovation required to produce such a naturalistic feel.

• Paths to Pixar – MU Edition – When one door closes, sometimes another door opens – one with an even more exciting opportunity behind it. Members of the MU crew tell their own compelling backstories and share the challenges they overcame along their paths to Pixar.

• Furry Monsters: A Technical Retrospective – Explore the difficulties in creating characters that are 20 years younger with tools that are 10 years more advanced in this contrasting look at the differing technical challenges that arose when making “Monsters, Inc.,” and “Monsters University.”

• “The Blue Umbrella” – This animated short film from Pixar Animation Studios, directed by Saschka Unseld and produced by Marc Greenberg, played in theaters in front of “Monsters University.” “The Blue Umbrella” tells the story of an evening commute in which the rain starts to fall and the city comes alive to the sound of dripping rain pipes, whistling awnings and gurgling gutters. And in the midst, two umbrellas—one blue, one not—fall eternally in love.