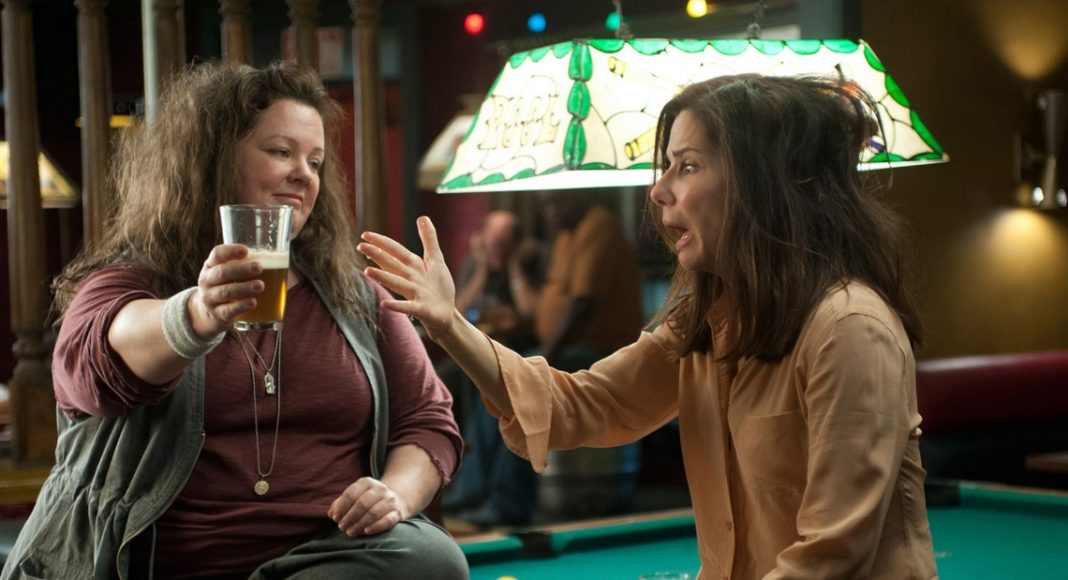 The Heat is a brilliant move at getting people into theaters, and the best part of that statement is that by “people,” I mean women (and those they’ll bring with them). It’s a brilliant move because the movie industry is trying like hell to put off the death of theaters, and they are changing their game in a variety of ways as desperation sets in.

For decades, we’ve known how and where to go for half-baked “pulls.” For men, we put Bruce Willis, Arnold Schwarzeneggar, or giant robots in a film, and release a trailer that offers little in the way of plot description, and a lot of explosions. For women, we pick a hot guy and have a woman cry in the trailer. Of course, there are variants. We might have a really stupid comedy involving a bunch of guys who are probably stoned, and a scantily-clad babe on the poster… whatever.

The Heat, hoping to capitalize on the popularity of Bridesmaids, believes it can meld these ideas, and get women to show up for Sandra Bullock and Melissa McCarthy. It’s also working on the idea (because it saw, but didn’t get, Bridesmaids) that women are not above some stupid comedy themselves, even if there are only extremely limited circumstances under which they will… sort of… admit it.

We’re taking “buddy cop” for a ride here, and we’re plugging in Bullock and McCarthy in the simplest terms of “what people might expect,” so that, I assume, we can film the thing in about four days. Bullock, much like in previous roles, is a largely inept cop (FBI agent here), no matter how “good” the film may tell you she is, and she’s out of her element in every situation. McCarthy is rude, crude, and could never possibly still have her job as a cop even if she was Superwoman. Also, according to much of what the film wants you to find funny, she’s overweight.

As you might expect, our story develops with Bullock the straight-laced FBI agent who can’t seem to make friends being thrown together with McCarthy, an obnoxious, nonsensical cop who also can’t seem to make friends. They’re both very good at their jobs, Bullock because she is a kind of idiot savant Sherlock Holmes (apparently), McCarthy because if you break enough rules, you eventually get the job done (apparently).

Now they have to work together, Bullock has to prove she can work with others if she wants a promotion, McCarthy wants the intel the FBI can get. They’re after a drug kingpin, and have a long road to get to him.

Playing along the norms of the buddy cop comedy, things progress through channels well worn, but The Heat kicks it up a notch. It isn’t just that each next scene is cut-and-pasted from the Idiot’s Guide to Cliche Screenwriting, which would probably make for a halfway decent final result, but it’s from the supplement in the back of the book that urges you not to use these long dead options. Worse, you can very nearly hear the chuckles of a movie that is laughing at you for watching it.

So many moments from the film are obviously slapped together scenes worked off of napkin scribbles from someone’s drunken night of “great ideas,” and they aren’t even worked into a script, but pull away from the film in order to stand alone. Whether it’s McCarthy climbing through car windows, or Bullock launching a peanut out of her nose (or the larger “drunken debauchery” scene), none of it is really connected to the film’s plot, but is sewn in haphazardly with plot points that serve only as the excuse for whichever really clever laugh we were after. This generally means that the funniest points the film offers up are those that have us laughing at the fact that, for example, the car blows up, because if you didn’t know that was coming, you probably shouldn’t be allowed out unsupervised in the first place.

All of that means that there are actually some moments that may crack audiences up, but only in that strangely uncomfortable sense of not believing something is actually happening. It’s one thing to make a comedy that is meant to leave our analytic sensibilities at the door and just have a good time, but it’s quite another to make a film purely from the perspective that there are a lot of stupid people, and they need movies too.

It’s a movie that you want to like just in theory, even if only because you’ve got a sure pass for the Bechdel Test, but about ten minutes in you realize that this is only because the test, unfortunately, does not include – …, and (4) aren’t portrayed as complete morons. Stick Adam Sandler and Eddie Murphy in this one, and it would have managed one of the worst shellackings in a decade.

In a nearly unprecedented twist, the bonus features on the Blu-Ray release are nearly infinitely more valuable than the film itself. This makes for a seriously confusing trip through the release as a whole. Even just a quick look at the deleted scenes and bloopers will come as a bit of a shock. Many of the scenes were apparently improvised (or they just took twenty takes of them for fun), and the idea that we have some very funny people involved in this film becomes immediately apparent. A couple of the deleted scenes, and a lot of what you get in the bloopers, is actually really funny. How then do we end up with this final product?

More importantly, how do you get the original guys from Mystery Science Theater 3000 to do a full-length commentary, also known as just running this film as an “episode” of MST3K, without knowing that it is clearly a goldmine of mockery potential? Don’t you really have to be aware that what you’re making is terrible for this “bonus” to have any chance at existing? It is, by the way, hilarious.

Beyond that, the special features don’t amount to all that much, with your standard featurettes (see full list below) that offer behind-the-scenes looks at various aspects of the production. There are also a couple more commentary tracks with the stars and the director, and these are actually fairly interesting.

If you can manage to never watch the standard version without some commentary or other running, you’re in for a treat.

*Best Performance by an Actress in a Leading Role, The Blind Side, 2009

**Best Performance by an Actress in a Supporting Role, Bridesmaids, 2011

There's a tongue-in-cheek, meta drive to Reboot that is both a brilliant opening to comedy and a purposeful alienation of a lot of viewers,...
Read more