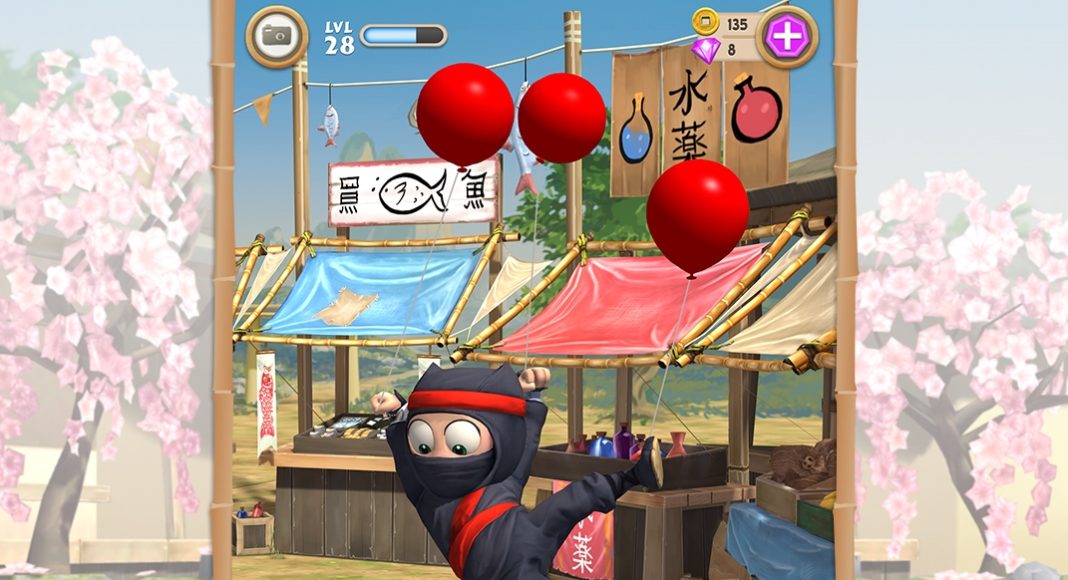 Better late than never, Natural Motion has finally released Clumsy Ninja to the App Store, and you’re going to wish you could have flipping this little guy around for the last twelve months.

A strange, but immediately interesting combination of rag doll physics and virtual pet, Clumsy Ninja is a doe-eyed, lovable doofus that you have to put through his paces so that he can learn the ninja moves necessary to eventually (we must presume) rescue his love. You’ll have him jumping on trampolines, dodging watermelons, and when all else fails you’ll just toss him around, all in the name of earning experience and unlocking new and exciting ways to flip him through the air, or dunk him in his personal ninjaball hoop.

You might be thinking, despite the fact that a year ago everyone was talking about this after Apple’s presentation, that a virtual pet ninja isn’t anything you’re going to spend any time with, much less get addicted to, but that’s because you haven’t let him get under your skin yet. 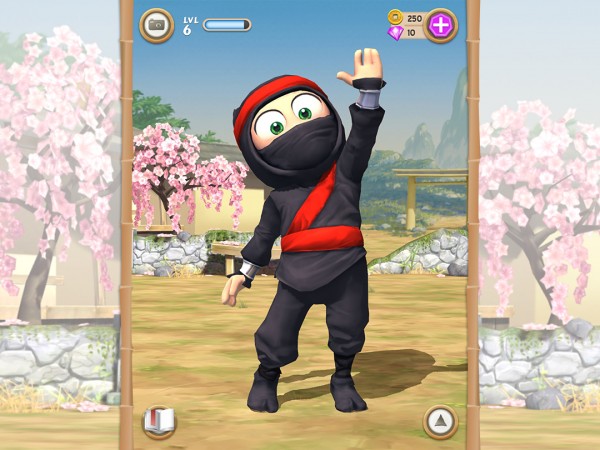 The interaction abilities of the ninja and his world are really pretty impressive, and it comes together with all of the things you’re supposed to buy far better than you probably imagine. Especially when you start attaching balloons to things.

Possibly the best part about the game is that it has a structured set of goals that get handed out to you that make it work as something to just pick up for a couple of minutes at a time. Smack something around here, toss ninja around there, and you’re good.

It’s a strange genre, and one that’s hard to recommend, and harder to rate, but this is certainly at the top of the heap. It’s also a genre that, quite frankly, I find rather goofy and annoying, and yet I found myself hooked. If that’s not a sell, I don’t know what is. It’s just so oddball that it comes close to genre self-mockery, and yet it’s amusing in its own right, and hard to put down. Add in the fact that it really impresses, and shows off some surprising abilities, and this is one that you want to get on your device, even if it’s just to show it off.

Meet Clumsy Ninja, the most hapless ninja ever to grace a touchscreen!

Train him, throw him, tickle him, and even tie balloons to him. Everything you do will make Clumsy Ninja more skilful, and help him find his missing friend, Kira.

Clumsy Ninja is the next generation of interactive characters! He can sense, feel, move, and react uniquely every time. Prepare to be amazed…oh, and please take good care of him!

Train your ninja to learn new tricks and super-special Ninja Moves! Impress his sensei and earn new Ninja Belts on your way to find Kira, or just have fun with over 70 unique interactive items, including trampolines, punch bags, ball guns, a chicken, and… a squirrel!

You and your ninja will travel to new locations, play new games, meet new characters, complete quests, and unlock fun new items to play with. How many will you discover?

Customize Clumsy Ninja’s suits, belts, and headbands to match your style. Take photos of your ninja’s craziest stunts, and share the fun with friends instantly. Keep your eyes peeled: there are many surprises waiting for you!

Clumsy Ninja is a living virtual friend who thinks and acts with real intelligence – and a lot of clumsiness! You’ll experience unique moments with your ninja and his companions every time you play!

Clumsy Ninja is the first game on touch devices to ever use the EUPHORIA simulation technology – producing the most believable character you’ve ever seen.