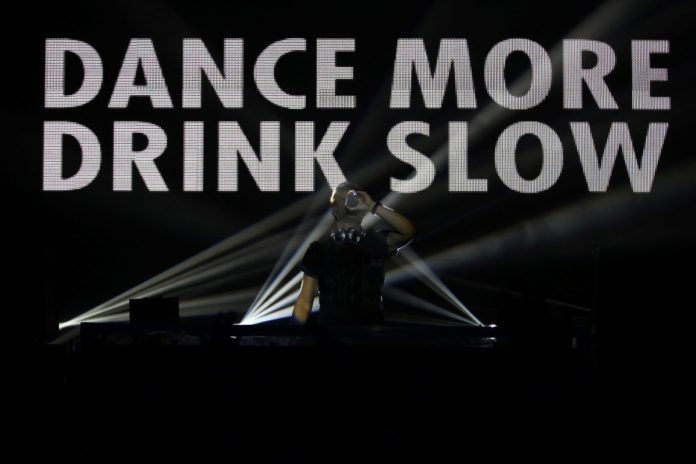 Despite the apparent simplicity of buzzword, call-to-action efforts, drinking responsibly is a complicated issue, and actually endeavoring to get people to do it is a project that is ultimately difficult to understand, much less accomplish. Because of that difficulty, I love to see the efforts surrounding the entire idea, whether they hope to convince people to do it, shed light on all the factors that make life more conducive to doing it, or a little of both.Heineken has teamed up with Dutch record label Armada Music and world-famous DJ Armin Van Buuren to not only promote the idea of drinking in moderation, but also to showcase how different factors play a role in the amount of drinking that happens in certain situations. In this case, they look at the change in alcohol consumption in a club where all other factors are the same, except the DJ.

Dubbed “The Experiment,” and part of the “Dance More, Drink Slow” (#DMDS) campaign, the exercise was filmed on location in Miami by Philip Andelman over two nights. An equal number of patrons were filmed in the same club, and the sales of alcohol were measured. On night one, a decent enough DJ, but one that obviously isn’t pulling that many people into the experience. On night two, DJ Armin Van Buuren. The results are pretty impressive.

At the heart of the overall campaign is Armin Van Buuren’s new track, Save my Night, which is itself a statement on moderation, and showcases Van Buuren’s commitment to the social experiment itself, and efforts to promote responsible drinking.

Make sure to check out the video, because it isn’t just the difference in the number of drinks sold that makes it interesting. I think it relays far more information, and hopefully the campaign will be able to showcase the hows and whys of non-responsible (or not-as-responsible) drinking. To paraphrase Van Buuren at the film’s open, if the DJ isn’t good, people are going to look for something else. That’s a bigger message than it seems, especially for young people, because it highlights the shift in focus, hopefully, when it comes to looking at what exactly it is that patrons of a club are “doing” by being there. Due to the different laws regarding drinking ages, younger adults that aren’t yet of age but wish to experiment with alcohol, more often than not find themselves in clubs to drink, and not for the music. Meaning more and more young people may look to find something like this reddit fake id in order to drink in a club, irrespective of what else the club has to offer.

Of course, it’s the ongoing potential I find the most interesting. Having a DJ show up to really blow the roof off the joint probably isn’t terribly surprising as something that gets people to drink less (though the exact difference is still pretty surprising), but the idea of kicking off the exploration is an exciting idea. Bar and nightclub owners are bound to find themselves inherently conflicted when it comes to trying to find new and exciting ways to get their customers to spend less money, but the possibilities exposed here are sure to lead to other great insights. Trying to get people to change their behavior is one thing, and it’s obviously always a hard road, but if we can throw in a little changing it for them, we’re a lot more likely to get results.

I’m curious what you think about this experiment, and the campaign in general. Are the results surprising? Is this the sort of campaign that should get massive exposure to get the ideas out there, and hopefully inspire similar efforts?