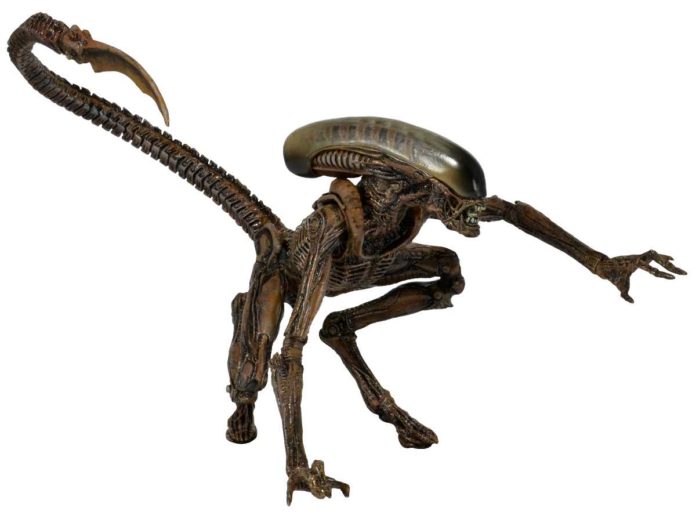 Alien fans rejoice, and keep your eyes peeled, because you’re about to get a shot at some action figures. Not only are you about to get your shot at the first-ever Ripley figure, but a whole slew of other merchandise is coming, by way of several companies. The 35th Anniversary of the film is really a pretty big deal, especially if you consider the fans that still hold onto the film, and the extent to which Alien (and the sequels) hold up over time.

Check out all the info below, and start putting away money now. The action figures are one thing, and NECA and Sideshow Collectibles make some fantastic products, but you’ve also go a card game, video game, a line of ornaments, and just about anything else you could want.

35 years later, fans are still “screaming” in space as Twentieth Century Fox Consumer Products celebrates the 35th anniversary of the ground-breaking film ALIEN, one of the most enduring sci-fi horror franchises of all time, with multiple iconic partners for exclusive branded merchandise available worldwide.

National Entertainment Collectibles Association (NECA), an entertainment conglomerate and global leader in licensed consumer goods, in association with Fox Consumer Products, announces today the first-ever action figures of Lieutenant Ellen Ripley that feature the likeness of actress Sigourney Weaver, who was nominated for an Oscar ® and Golden Globe ® for ALIENS in 1987. The officially licensed Ripley action figures from NECA will span multiple movies within the ALIEN saga: initial plans include a figure of Ripley in her Nostromo jumpsuit from the original 1979 film, to be followed later by a Ripley figure based on the 1986 movie ALIENS, directed by James Cameron.

“As we celebrate the 35th anniversary of one of the most successful film franchises of all time, we are thrilled to introduce an array of commemorative products across different categories in partnership with iconic brands including NECA, SEGA and many more,” said Jeffrey Godsick, president of Fox Consumer Products. “In addition to the highly anticipated release of Alien: Isolation™, hardcore fans can finally add Lieutenant Ellen Ripley to their ALIEN collections as we welcome her NECA figures into the family of officially-licensed merchandise. Many other exciting first-time and limited edition products will also release to celebrate this exciting milestone this year.”

Prominent partners participating in the ALIEN global anniversary campaign include:

Insight Editions will produce a highly-illustrated and a detailed guidebook to the Alien creature.

NECA – Figures, board games, bobbleheads, plush, and toys will hit major retail stores beginning in March 2014. Prototypes of the Ripley figures will debut later this summer at San Diego Comic-Con.

SEGA – The highly-anticipated first-person survival horror game Alien: Isolation will be available on PS4, Xbox One, PS3, Xbox 360, and PC in late 2014. To celebrate this release as well as further installments in the future, gamers may want to check out available custom PS4 controllers so they can immerse themselves in the experience.

Titan Books will release all-new canon fiction novels based on the film franchise, followed by a 35th anniversary retrospective called “ALIEN: Archives” which will be the most comprehensive book ever created about the ALIEN franchise with new exclusive interviews with Ridley Scott and Sigourney Weaver and content that has never been released.