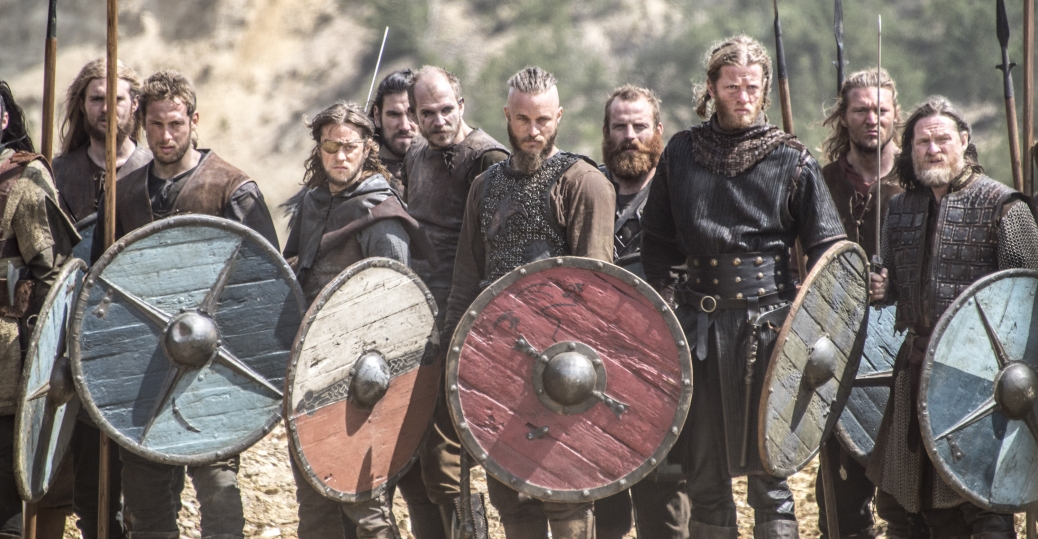 Vikings was already a show that held viewers with the radical twists and turns that were the norm of viking life, but season two takes that to a whole new level. Not only is the show littered with questions of loyalty, but it bobs and weaves just as Ragnar does himself, meeting life with whatever happens to seem like a good idea at the time.

The show is teeming with notes that make it easy to compare to Game of Thrones, especially since there is a certain percentage of the screen time that is taken up by people glancing over their shoulders at other people, and wondering if they can really trust them. It ups the game to some extent, because while Game of Thrones might have a lot of knocking people off, there are still times when people are pretty comfortable that the person they’re talking to isn’t just going to bury an axe in them.

When we left off season one (catch a cool recap of the season video below), Ragnar (Travis Fimmel) was in rather a tight spot, especially where his brother Rollo (Clive Standen) was concerned. Having his own seat of power hasn’t exactly made life easy for Ragnar, and he is balancing a lot of competing forces, including finding himself forced into some tricky situations by King Horik (Donal Logue).

The second season kicked off with Rollo openly siding with the other team, and that didn’t exactly work out the way he wanted. In the end, during a pause in the battle, Ragnar turns the idea of destroying each other into working together to sail east and plunder England a bit more. Meanwhile, Princess Aslaug makes her way to Ragnar’s home, and reveals that she is with child, which causes quite a lot of strain on Ragnar’s relationship with Lagertha.

But, where are we going from here?

The first episode served really to deliver the conclusion of the things left hanging at the end of season one, but the second season really begins with episode two. This is where we jump into what we want to explore now. I can’t give things away, but History’s site gives you at least this much in the promo synopsis of the second episode.

Four peaceful years have since passed with Ragnar as Earl. The time has come for an unlikely alliance to band together in pursuit of a common goal–a new raid on England. A storm pushes the Viking fleet to a new destination, and on the beaches of Wessex, Ragnar and his men may have met their match.

That’s right. It comes as a bit of a surprise, but this episode zaps you right into the future. Jarring as it might be, we’ve set the stage for a time jump to offer up some interesting plotlines, as we take another shot at some establishing moments. It also works out well for some of the directions we try to go with certain characters, and opens the door for many elements to make a lot more sense than if our raid on England was only a few months after the events of the first episode. And, despite the fact that it might seem odd, and/or a bit random, the early portion of the first season set the stage for the idea that the vikings are often unable to go on raids for a year or more, no matter who they are trying to raid, by poor weather conditions throughout the seasons of the year.

When in England, Ragnar is far more concerned with the apparently bountiful land they’ve found than he is with the gold coins they can bring back home. That angle feels a lot more believable with Ragnar sitting at home for four years instead of jumping straight from one battle to a coordinated raid on foreign soil.

Also, Athelstan begins to figure more prominently in the show, and there are several moments that focus in on him which make a lot more sense if he’s been around for four more years. On the other hand, this is perhaps a double-edged sword of the time leap, because we might expect Floki, and others, to cut him a bit more slack by now.

It’s a show that truly forces questions about a second season, because as much as fans loved the first season, it has the feel of something that was perhaps meant to end, as opposed to a story that can sensibly be told year after year. That’s all the more palpable because of the nature of the situation we’re throwing ourselves into, which demands that people get killed or otherwise apparently become unimportant. There are only so many battles you can watch, with people dropping all over the place, and still hang onto the main characters you want, without sliding into something that becomes almost silly. That’s before you even get to things like the effective loss of Rollo as a central figure in the first episode.

Whatever doubts there might be are dispelled with the second episode of the season. The writers, as evidenced by the first season, are doing some of the best work to be found on television right now. What’s clear about the plot construction, as much as working up solid drama is a necessity, is that what we’re after happening is what might actually happen with these characters in these situations, not whatever we think might sell.

We’re in a whole new world of alliances and problems, but they are developed just as well as they were in the first season, and are delivered via the same sensibilities that got everyone to fall in love with the show in the first place.

We’re on a winding road, but by the end of the fourth episode, we’re geared up for a massive confrontation, and have a few characters that we’re unsure how they can wriggle out of what they’ve gotten themselves into, and you’ll be more locked in as a fan than ever.

Special kudos have to go out to Fimmel, Standen, and Blagden, for pulling off surprisingly spectacular feats of acting. The big moments are obvious enough, but Fimmel and Blagden manage a few key turns at brilliant subtlety in which they give you volumes just by rolling their eyes, sighing, or (especially for Blagden) properly listening to other people.