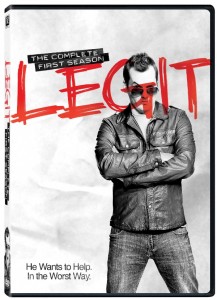 Legit, FXX’s NSFW comedy starring Jim Jefferies, kicks off in oddly similar fashion to The Sessions. Not only is the plot of the pilot focused on the initial entry of MD-suffering character Billy, by way of trying to get him the opportunity to have sex before he dies, but DJ Qualls arguably looks a bit like John Hawkes, especially as done up for their roles.

It does rather diverge from there.

Jefferies, who conveniently plays a brash, ever-cursing comedian (named Jim Jefferies), lives with best friend Steve, and (after we move in a couple of episodes) Steve’s brother Billy. Once past the establishment episodes that cover taking Billy out of his care facility, the show really just covers the life and times of three people who don’t have much to do and/or can’t do much.

At times the show develops along lines that are somewhat similar to a sit-com mold, but at others it is largely (and too obviously) just drawing in the characters that exist in Jefferies stand-up monologues. One episode covers a plane ride, and very little else, and is largely a one-off that puts Jefferies in the situation to go through his routine on who gets what armchairs, and the general ridiculousness that is air travel. That isn’t to say that it isn’t funny, but it feels odd, and doesn’t actually develop much. Most episodes are better mixed, such as the one that features Billy trying to internet date, or perhaps “internet date.” This one pulls together some character development, builds more of a story around Billy and his struggle for existence, while allowing time for Jefferies to throw out a few extended rants on dating, women, and how to manage the dating of women.

The show is rude, and decidedly crude, but it manages an amount of heart and soul that is almost unnerving, precisely because it makes you uncomfortable with the fact that you recognize and accept it. A good deal of the comedy comes from Jefferies effort to simply point out that the Emperor has no clothes, and ruthlessly mock those who refuse to get on board with him, and this is never managed better than in the episode that showcases the hoarder that is Steve and Billy’s overbearing mother.

Overall, as you might imagine, the show feels like early Seinfeld, which also had an air of displaced stand-up about it, but with no effort to be family-friendly. It is funny, but the question, and I think one that Jefferies himself is outrageously cognizant of, is whether or not the NSFW nature of the show is actually doing any work itself. Though frequently not the case, I think it is here.

For all that this is a show about a frequently stone, lazy guy who sort of fell into the ability to make ends meet doing stand-up, there is a seriousness to Jefferies’ idea that if you aren’t “really” looking at things, you aren’t really looking at them.

Along with the standard offerings – a few deleted scenes, a better-than-average blooper reel, and a collection of some of the longer monologues Jeffries delivers throughout the season – the release comes with the somewhat amazing bonus of commentaries by Jefferies and others on every episode.

Worth their weight in gold, the commentaries are at least as valuable as the episodes themselves, and it’s exceedingly rare to get this much insight and commitment from a DVD release. Occasionally Jefferies wanders a little far afield, but his co-stars can usually bring him back around. A fair amount of the total time, covering all the episodes, is a sort of back story wandering, but those familiar with commentary tracks will know that there is always going to be the general “behind the scenes” chatter as well.

There are even a few moments that I’m betting made Jefferies kick himself that he couldn’t suddenly rewrite and reshoot the scene. Overall, the other features being worth about what people clearly expect from them, this is a nice package for the release of a show that is not necessarily the next biggest thing. Fans are going to get a lot of added value, which just isn’t always the case.

This outrageous new comedy stars Australian Jim Jefferies as an edgy, foul-mouthed stand-up comic living in Los Angeles, struggling to make his life and career more “legit.” But every time Jim tries to do the right thing, his good deeds turn into wildly inappropriate and utterly hilarious escapades. Joined by his neurotic best friend and roommate, Steve, and Steve’s wheelchair-bound brother, Billy, Jim takes comedy to a whole new level, whether it’s visiting a Las Vegas brothel, partying with the mentally-challenged or trying to pick up women at a gay bar.