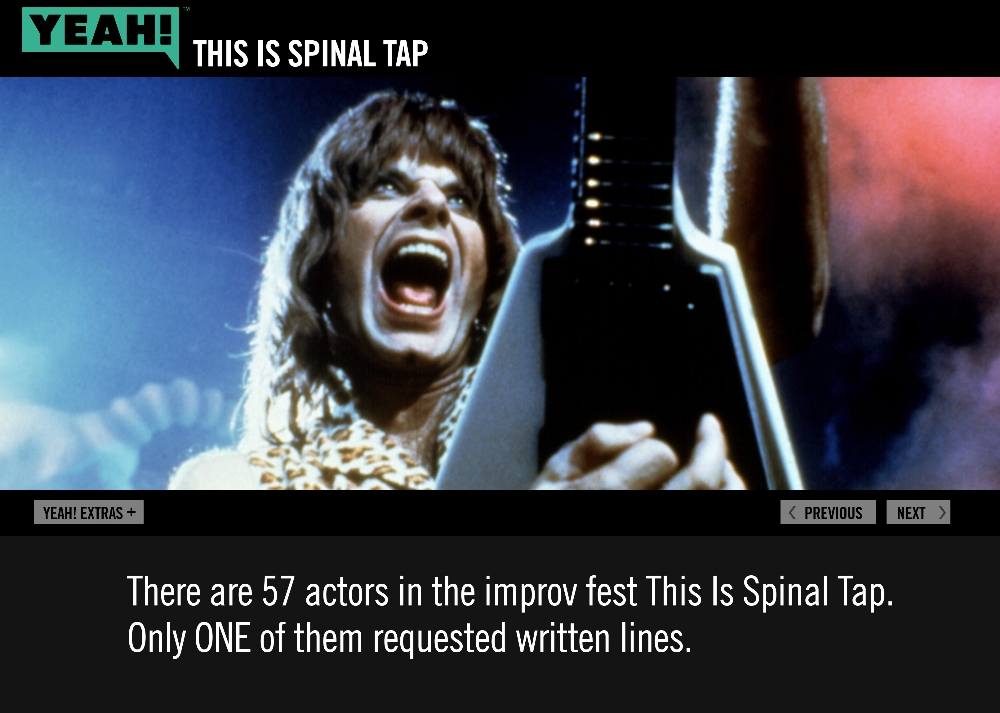 Whether you’re new to Tap, or have seen them in concert (like me), it’s hard to argue with free, and the Yeah! App from AMC Networks is offering This is Spinal Tap – The Special Features Version for free through April 11th.

Far more than just a ‘Pop Up Video’ version of films, the Yeah! App gives you a completely unique experience, and none of the films is packed with more awesome than This is Spinal Tap, which not only pulls in hundreds of cool notes, but gives you some incredible insights from a variety of legendary rockers… and Jack Black.

Check out the full details below, and make sure you don’t miss this opportunity to enjoy this truly special viewing experience. 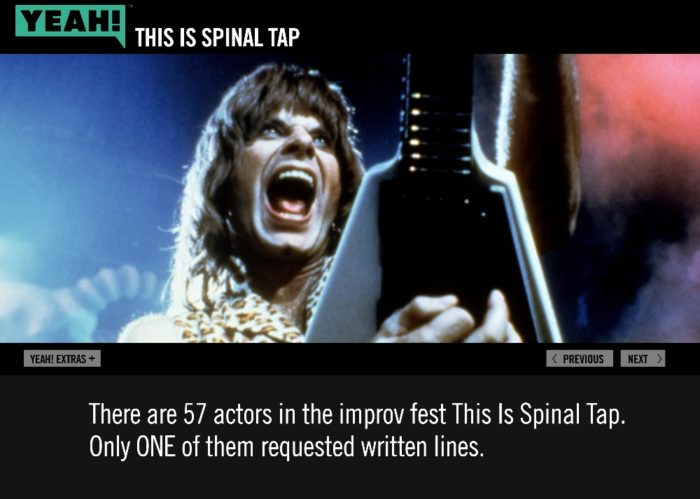 Offers This Is Spinal Tap – The Special Features Version

Gratis to All iPad Users Through April 11

On April 1, movie and music fans alike will have the opportunity to erase “the thin line between clever and stupid” with This Is Spinal Tap, the iconic 1984 film deemed a treasure by the National Film Registry, the Library of Congress and a legion of rock’s biggest stars. On that day and continuing through April 11, AMC Networks will allow fans to test drive their much buzzed-about YEAH! iPad movie app, with a complimentary screening of its latest, expertly-curated film, This is Spinal Tap – The Special Features Version. This complimentary “100% No Cost!” movie will be available to all iPad users, and for online viewing at www.yeahtv.com/spinaltap.

Like all of YEAH!’s curated movies, This Is Spinal Tap – The Special Features Version is designed for the interactive era made possible by the iPad, a new platform for film fans that recently earned AMC Networks’ groundbreaking app a spot on Entertainment Weekly’s Must List.

YEAH!’s curation of the comedy classic, created for its 30th anniversary this month, has received notices from the press including Rolling Stone, USA Today, The New York Post, Indiewire and The New York Times. In their review, The New York Times called YEAH!’s fact-packed, new version of the film, “illuminating,” adding “the only thing missing is a volume control: iPad sound being what it is, you really do need a way to turn it up to 11!”

With YEAH!’s Special Features Version of This Is Spinal Tap, fans will have access to a rich layer of new content integrated into the screen below the film as it plays. This includes exclusive interviews with director Rob Reiner, actor Fred Willard and real-life rocker/actor Paul Shortino, and exclusive commentary about the film’s lasting influence from more than 40 music luminaries, including Jack Black, AC/DC’s Brian Johnson, Rob Zombie, Meat Loaf, Dave Navarro, Megadeth’s Dave Mustaine, Billy Corgan, Pearl Jam’s Mike McCready and Andrew W.K. There are also hundreds of little-known facts about the film and how it parodied, mirrored and served to inspire real-life events from the bizarro world of heavy metal, along with interactive polls, quizzes, links to IMDB and much more.

“At first, nobody got it,” director Rob Reiner tells YEAH! in the lengthy video interview that’s the centerpiece of YEAH’s 30thAnniversary Special Features Version of his classic. “People said ‘why would you make a movie about a band nobody ever heard about, a band that’s so bad?’ … Now it’s become a part of the National Film Registry.”

In YEAH!’s new expanded version, Rob Zombie calls Spinal Tap “a painfully true documentary of my life,” while Jane’s Addiction’s Dave Navarro claims his band “experienced just about every scene is this film.” Jack Black says its style “set the stage for all improvisational-based film and television ever since,” while Dominic Monaghan confesses, “I watched it every day for over a year… and do a pretty phenomenal Nigel Tufnel impression.” Pearl Jam’s Mike McCready claims, “I have lived Spinal Tap moments throughout my career, even getting lost backstage in Cleveland.” The Smashing Pumpkins’ Billy Corgan adds, “Little did I know how we’d one day argue about the deli tray. For all bands, this film is prophetic.”

“The outpouring of talent that has contributed to this 30th Anniversary version has been really inspiring,” adds Lisa Judson, YEAH!’s General Manager. “To paraphrase the great Nigel Tufnel, ‘We’ve really pulled out all the stops and cranked this Special Features Version up to 11!”

Unlike DVD extras or Blu-ray features, the YEAH! iPad app delivers information instantly, scene-by-scene, where and when you want it during the movie – content that can be switched on or off with a single tap of the finger. With 400-500 curated elements, the encyclopedic depth of content included in this and all YEAH! editions of iconic films can turn any fan into an instant expert on the movies they love.

With the complimentary 30th anniversary version of This Is Spinal Tap, devotees of this camp rock classic can learn.

To access the film, users can download the YEAH! app on the iPad for free from the App Store on iTunes or via the website, www.yeahtv.com/spinaltap. Then, sign-up or sign-in to redeem the complimentary This Is Spinal Tap – Special Features Version through April 11, 2014. (Popcorn and earplugs, not included).

YEAH! is a unique storytelling medium that goes beyond mere trivia to weave intimate moments and commentary from a who’s who of creators and stars into a rich, immersive narrative about the making of and continued appreciation of iconic films. The abundance of video and factual backstory is curated from months of research and in-depth interviews on every film, leveraging the expertise and delivering on the high level of quality associated with AMC Networks’ brands and programming. Director Richard Linklater hailed YEAH! as “a film geek paradise,” while horror legend Wes Craven said, “I learned things about my movies even I didn’t know!” In its shout-out to YEAH! on its Must List in January 2014, Entertainment Weekly confessed “its’ the only time we’ve really loved a know-it-all!”