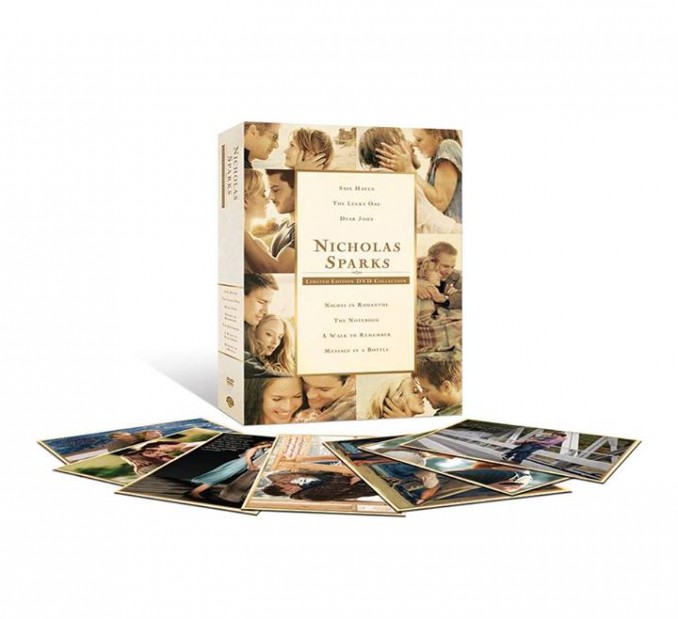 The Nicholas Sparks Limited Edition DVD Collection is another of those set releases that is the best and worst of all possible worlds. Serious fans are going to be happy to get collectible postcards, and a “personal letter from Nicholas Sparks,” but they already own the movies, and the discs don’t have any new bonuses.

On the other hand, if you don’t already own the movies (or only have one or two), this is a great collection to bring them all home at once. While there aren’t new bonuses, and the films aren’t remastered, or otherwise jazzed up with new treatments, most of the films include some solid bonuses anyway, and even the aging Message in a Bottle looks pretty good.

Running through each film probably isn’t necessary (you’re a fan, or you aren’t), but a little refresher, especially about the bonuses, might be in order.

Message in a Bottle –

Robin Wright is a reporter who stumbles upon a message in a bottle, and becomes determined to find out who wrote it. Nothing could be more impossible, and the movie wisely glosses over how this is managed, and instead just throws up a sort of ‘Look, this is the story,’ sign, and asks you to play along. She finds Kevin Costner, and hilarity, or gooey love slop, ensues, depending on how much of a Nicholas Sparks fan you already are.

It’s the chemistry that started it all, and the stars manage to deliver what is, to those outside the target demographic, probably the most watchable film in the set. There’s something overly self-important and grandiose about the whole thing, as though Sparks invented the idea of Love, and is now trying to put an ad for it within a film, but it works in general.

The disc comes with a commentary that is actually pretty good, detailing a lot of the film’s construction, and a few deleted scenes.

A Walk to Remember –

Mandy Moore, who, as a serious, interesting actress has gone on to do a lot of voice work, finds herself in a kind of Romeo & Juliet set in the real world, as she and Shane West try to overcome the laughable and ludicrous obstacles hoping to keep them apart… or whatever.

A stand out as the most… young of the Sparks films, this one managed to land in a weird camp. Partly because it aimed at a strange crowd, but also tried to throw in a general frame that ought to include older people, which led to goofy plotlines, and partly because it wanted to showcase Moore so much. It’s either the first, or last Sparks film any fan can rattle off, and it seemed to be aiming for exactly that coveted title.

The disc comes with two commentary tracks, and very little else. The tracks are about as interesting as you expect, though the one with the director gets into more of the meat of things, relaying a lot of pretty interesting behind-the-scenes stuff.

This is the one that leaps to mind most of the time when having the Sparks’ name thrown at you, and with good reason. For all that fans are just going to have to reconcile themselves to the idea that Sparks produces shlocky, syrupy comfort food for the love-addicted soul, The Notebook actually hits a lot of notes, and has interesting acting thrown in to boot. Moreover, the story is less overused than most of the work we get from Sparks, leaving a lot open, and distancing itself from the most obvious spins.

Ryan Gosling shows abilities that will come to bear more seriously in later years, and Rachel McAdams is… not too bad either.

Nick Cassavetes is going to go on to do a lot of far less interesting work, and it’s a shame, because he managed to pull the best possible out of this one, stringing together well-crafted scenes, and delivering some great conversations.

The disc here is pretty loaded, with two commentary tracks again. One from the director, and one from Sparks himself. Unfortunately, these probably don’t deliver to serious fans in quite the way they might hope. Again, these are bonuses from previous releases, so the real fans have had their spin with these for years anyway. The Sparks track is pretty solid, but you’d hope for a bit more from author. He discusses a lot of the translation, which ultimately runs out of steam. This one also has a selection of featurettes, mostly covering a variety of thoughts and impressions on the story and the location.

The oldest of the films, by, for, and about two people who are not only older, but spend their time lazing about a B & B, which is more or less code for spending your time “being old,” Night in Rodanthe is also the long, slow version of Sparks. Richard Gere and Diane Lane also serve as the most problem-centric characters to be found in this group of Sparks movies, and though we want to ultimately dip them in treacle, most our time is spent just watching them sort of have their problems at the universe.

On the other hand, if you can stomach the labor of love, and/or the general sentimentality of two people basically going through semi-solitary therapy, the acting is pretty strong all around, including the work of the supporting cast. Viola Davis, Scott Glenn, Mae Whitman, and several others give good turns.

Nights in Rodanthe, hailing from the distant eons of 2008, has nothing extra on the disc.

At this point we get into a fairly unique world of DVD collections, as we have to deal with the fact that not only do you already own the film, but it seems a lot like you just bought it.

Dear John is a film that exists utterly in a special vacuum of Hollywood creation populated by films that have a couple of fairly popular stars, a name to attach that draws people in because they like other Nicholas Sparks movies, and virtually nothing else in the positive column. Channing Tatum isn’t bad, but the story is a mashup of every other sad, love story that involves the military and/or war that’s ever been made, and this is the version that doesn’t know how to tell its own story effectively. For fans only, or as a truly mindless bit of escapism, this is a stand out clunker in an already goofy game.

Having really just been released, there’s no surprise in the lack of new bonus material here. It comes with a stack of deleted scenes, and some featurettes detailing the location, general spins on the military, and other, more or less Sparksian standards.

The Lucky One is almost like a mashup primer for Sparks’ work. It’s got little bites of all the previous films, at times to the extent that you might suspect it of being slightly self-mocking. It’s got the ridiculously impossible quest to find someone for no good reason that we got in Message in a Bottle, throws in a military angle like Dear John, and spends a lot of its time with the characters undergoing self-analysis.

Zac Efron can’t really handle the material, which is saying something, but he probably passes for most, and he’s all cute and so on. There are a few moments where things, apparently almost accidentally, come together fairly well, which makes for a few scenes that might make the whole thing worth it to some. Beyond that, this is, as I said, a film that not only seems to mash together Sparks, but is almost a kind of salute to everyone who ever complained that his plots were outlandish and unbelievable. Oh yeah, says Sparks, get a load of this.

This one has one featurette, and it’s a short one. On the plus side, it’s very gooey, and covers the chemistry of the stars, more or less.

Safe Haven, which was just released, and is thus part of the real purpose behind slinging a collection together, is similar to The Lucky One in the level of gooftastic wonderment, but with the spin of having the police after one of the people we want to fall in love. A new twist for Sparks.

This one is actually better and worse than the average Sparks vehicle, mainly because it seems almost as though Sparks just doesn’t care anymore, writing almost at random, and because the stars actually manage to pull you in despite the story in a way we hadn’t seen since Message and Rodanthe.

Here’s another one directed by Lasse Hallström, who is, in some circles, known as one of the worst rat bastard directors in Hollywood. Following some awesome and/or fantastically fun efforts over the years (My Life as a Dog, Once Around, Chocolat, What’s Eating Gilbert Grape, etc.), he suddenly hit a place in his career where he dared the world at large to try to send him an offer so stupid that he wouldn’t do it.

This one has very little in the way of bonuses, a few deleted scenes and an alternate ending.

As you might guess, this one is hard to rate as a whole. It’s a solid collection, but it winds up in the category of mostly gift purchase. You already own the films anyway. If you don’t, this is definitely one to pick up, and you probably know just who you’re giving it to.

Enter to win your copy of the Nicholas Sparks Limited Edition DVD Collection below!