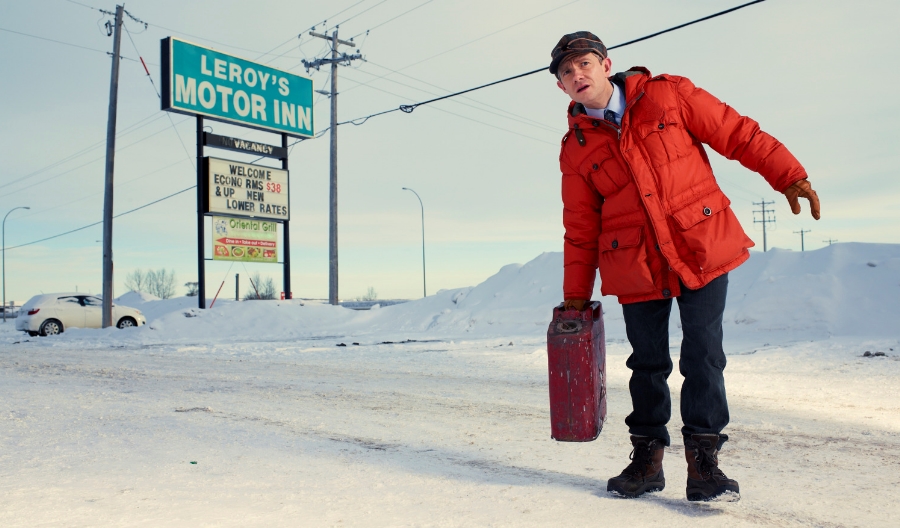 FX continues its effort to take over the world by putting out shows that, even if you hate them, are at least trying to do something amazing, with Fargo. Based on the work of, and produced by, Joel and Ethan Coen, the 10-episode series is only connected to the original film in the loosest possible sense. It takes place in Minnesota, police investigate foul deeds, and some really weird shit happens.

There isn’t really a central character to the thing, though Martin Freeman‘s Lester Nygaard and Billy Bob Thornton‘s Lorne Malvo come closest to filling the role. Instead, there’s something more like a central series of events, and the people who become tangled up in them.

Lester is a mild-mannered insurance salesman in the small town of Bemidji, MN. He’s meek in a way that makes meek avert its eyes, and his main problem in life is that his wife and brother can’t stop reminding him of the fact. At least, until one fine day Lester finds himself face-to-face with the bully from High School who figures there’s no point in not having a go at Lester again, even if it is twenty-something years later. This lands Lester in the hospital with a broken nose.

Meanwhile, Lorne Malvo is passing through on his way to Duluth when he hits a deer on the highway. The crash creates an opening for the guy in Malvo’s trunk to get away and hoof it into the woods, but being in his underwear, and this being northern Minnesota in winter, the escape doesn’t go well. Malvo’s bump on the head from the crash leads him to the hospital, where he happens to sit next to Lester in the waiting room.

Much like the case of the film, what follows is a string of murders, and a variety of other, often bizarre, crimes, and we follow along with perpetrators, the police, and those caught up in the tide.

The film worked so well, mainly, because as weird and wonderful as the plot was, it was almost irrelevant. Like most Coen brothers films, it was a strict, and deeply intricate character study. The show works because that remains the same.

It isn’t so much about the murders, as it is a kind of display of what people do when crazy shows up on their door. How do they really react? What makes them do what they do? And, how does it come to pass that they inexplicably find themselves on the other end of said crazy?

For all that Malvo will ultimately be painted as the devil, and a multitude of references once in a few episodes make the idea hard to avoid, he’s really working more of a Loki angle. He may be a hit man, or whatever he is exactly, but really he just likes messing with people. Winding them up, whispering in their ear, nudging them ever so slightly, and just watching it all play out. How that touch of chaos works people over is really what the show is about, and it’s sold brilliantly.

The fun and focus may bob and weave around Lester, but the side touches add the spice needed to bring the whole thing together. For example, Colin Hanks‘ Duluth officer who finds himself dancing with the devil in the pale moonlight, and the furious self-examination that follows. Coupled with the spot on performance by Allison Tolman as Molly (awesomely) Solverson, the officer in Bemidji, who won’t stop worrying the threads until something, by God, makes some sense, they provide the touchstone for the audience’s reactions and questions.

The show also capitalizes on that strange touch of moody desolation that reminds of the film’s purpose in offering up the frozen plains as a backdrop, even to the extent that most of the residents (who don’t flat out complain aloud) manage to look around at one point or another with an expression that seems to wonder, “Why the hell do I live here?” It’s the use and necessity of these small touches – like the hints at a kind of societal, resigned ennui – that offer up a spark of intellectual sport that has been missing from most of television for far too long. Here is a story that cannot be told without it being winter, or including a side character to experience our moral dilemma for us, or his daughter to serve as his confidant, and moreover it is written by people who are aware of all this.

All that said, Fargo is a show that must be endured through its first fifteen minutes, and that is no small chore. Lester’s establishment, by way of his emasculating wife, and the borderline nonsensical bully, is amateurishly handled, and it needn’t have been. The scenes are so contrived and overdone that they not only lose their power, they border on the unwatchable, and considering where things move, a certain subtlety of delivery here would have made for a stronger punch when things actually get moving. I blame the slip here on the necessity of expedience, given the limited total run of the show.

Once past this point, and no one should be allowed to give up before the end of the first episode for any reason, virtually everything is perfect. It is not only the most fun you’re going to have watching television all year, it’s also going to hit most viewers that they can hardly remember the pangs of anticipation this series causes.