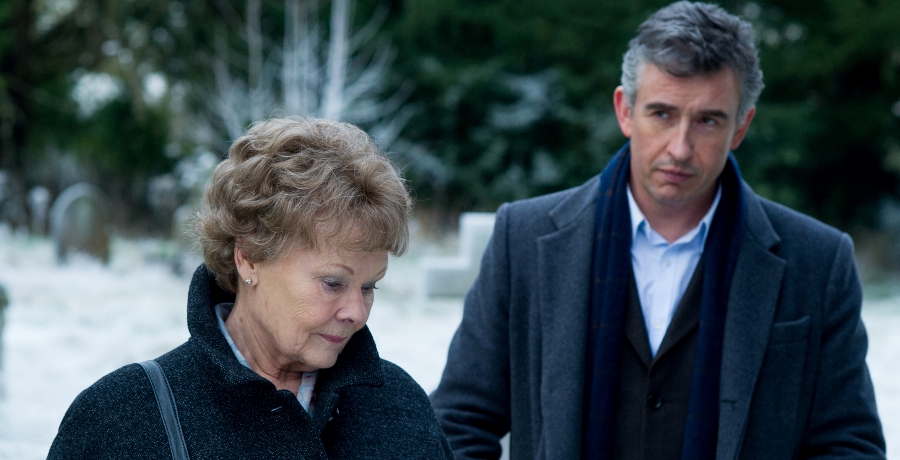 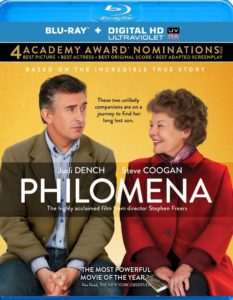 Philomena is as surprising in its existence as it is in its ability to transform a story that ought to be cliche syrup into something real and moving. The film’s ability to deliver honest emotion may be more surprising, given the synopsis, but the existence question may need some explanation.

Steve Coogan, of Alan Partridge and other comedic efforts fame, isn’t a name you immediately associate with not only starring in a venture like this, but also co-writing it and becoming something of a driving force behind the production. Moreover, it’s rare to get anyone behind a film that is taking a pretty serious shot at the Catholic Church, much less big names like Judi Dench and Stephen Frears. And, speaking of Stephen Frears, though he manages a lot of variety in his films, ranging from Dangerous Liasions, and Liam, to High Fidelity, and Tamara Drewe, a biopic exploration of hope, despair, and unbridled cynicism isn’t exactly what you expect from him.

The story is adapted from Martin Sixsmith‘s of his real “adventure” with Philomena Lee. Living in a convent in Ireland as a teen, Philomena had a son that may or may not have been taken by the nuns and sold to a wealthy American family. Martin, a respected journalist who is currently on the outs with the BBC as a result of a scandal that is only hinted at in the film, wanders into Philomena’s world, though he isn’t immediately interested in doing a “human interest” piece. The aging Philomena would now like some information about her son, and what became of him, but the Catholic Church won’t give her any information. Something about the story nags at Martin, until he finally decides to see what he can learn.

The pair discover that they are a unique team, blending Martin’s world-weary, cynical perspective with Philomena’s trust, faith, stoic resolve. They bond almost despite themselves, with Philomena’s fondness for romance novels and inability to be angry at the church mystifying Martin, and Martin’s stern rationalism and caustic approach to life confounding Philomena. Together they walk through Philomena’s history, discover some strange connections, and follow the threads that lead them ever closer to Philomena’s son. Both in the case of Philomena, and her son (and those around him), they perhaps discover that people are not so much the result of the events in their life, as much as they are the result of whatever they allow themselves to be the result of.

As I said, the film is masterful in its ability to take a story that sounds like horrible treacle, especially to the Sixsmith’s of the world, and pull out the finer threads that led the real Sixsmith to an experience worth sharing. Much of the credit there has to go to Frears, and his clear ability to dig into characters with seemingly simple, almost meaningless moments. Beyond his more notable works, under-appreciated gems like The Hi-Lo Country, Dirty Pretty Things, and even The Queen all benefit greatly from the same talent. 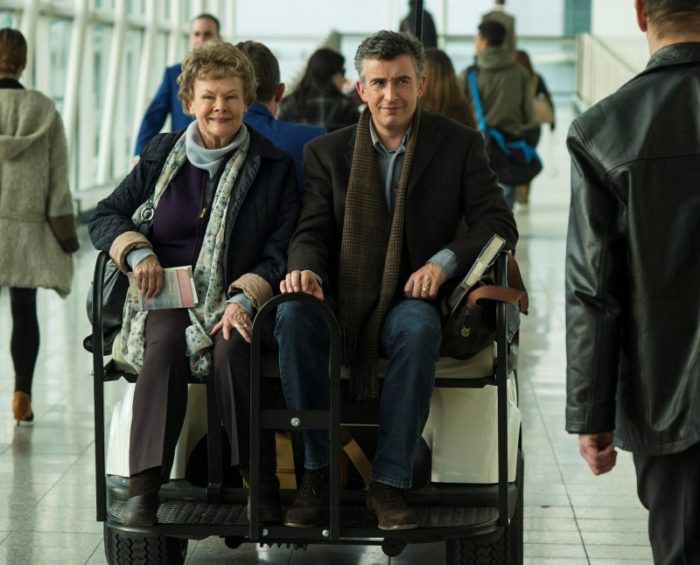 That said, Coogan and Dench give it their all, though I wasn’t as impressed with Dench as I have been in a great many other roles. Biopics can make for tricky roles, and in some ways this one seems especially difficult. Still, there were many moments when I got the impression that Dench was really playing “an old woman,” rather than specifically, “this old woman.” Nevertheless, the moments when she shines are worth it, and Dench working not quite up to what you hope for is still better than just about anyone working today.

All things considered, the release has a very impressive set of bonuses. This is the sort of film that you might feel lucky to get any additional content at all, just based on the fact that it isn’t going to touch any big money efforts. If you got a commentary track, you’d be happy, and you might expect a few deleted scenes.

This one has a commentary track, and a decent one at that, plus a lot of other bonuses that fans of the film are really going to enjoy.

Coogan and Jeff Pope (who co-wrote) are on board, and they spend most of their time talking about why certain elements are in the film, and others didn’t make it. This includes various notes on how the screenplay morphed over time, and how some moments from the novel seemed more key and/or necessary than others, even if they really wanted a way to get everything in. They also talk about the production itself, and about the real people.

This leads you into a featurette bonus that is Coogan taking part in a Q & A session, which is nearly 30 minutes, and has Coogan talking about everything from his introduction to the story, to getting Dench involved, and the road to the final product.

Beyond that you get a short featurette that provides some additional details on the real Philomena Lee, and a conversation with Judi Dench, which is actually focused more on her acting than this particular film. Both are far more interesting than seem at first glance, especially considering that the Philomena featurette is only a few minutes long.

Put together, it doesn’t sound like a lot, but fans of the film are getting a great collection. The Q & A is particularly interesting, and put together with the commentary, gives you a world of insight into how this film came to be, how surprising it really is, and how and why Coogan became so involved with something that is seemingly so outside the norm for him.

Anchor Bay Entertainment and The Weinstein Company are proud to announce the home entertainment release of the critically acclaimed comedy/drama starring Judi Dench and Steve Coogan, PHILOMENA. Directed by Stephen Frears and co-written by Steve Coogan and Jeff Pope, PHILOMENA will be available for digital download on April 4, 2014 before heading to DVD and Blu-Ray™ with Digital HD UltraViolet™ on April 15, 2014.

PHILOMENA premiered in the main competition section at the 2013 Venice Film Festival where it took home the prize for Best Screenplay. Later, the film won the Audience Award for Best Narrative Feature at the Hamptons International Film Festival. The Weinstein Company released the powerful film theatrically on November 22, 2013 where it has grossed over $34 million dollars to date. The film accolades continued with a 2014 Screen Actor’s Guild nomination for Judi Dench for Outstanding Performance by a Female Actor in a Leading Role and 2014 Golden Globe® nominations for Judi Dench for Best Performance by an Actress in a Motion Picture – Drama, Steve Coogan and Jeff Pope for Best Screenplay – Motion Picture, and Best Motion Picture – Drama. The Academy of Motion Picture Arts and Sciences nominated PHILOMENA for four Academy Awards® including: Best Picture; Best Actress in a Leading Role, Judi Dench; Best Music – Original Score, Alexandre Desplat; and Best Writing – Adapted Screenplay, Steve Coogan and Jeff Pope. In February, the British Academy of Film and Television Arts honored Steve Coogan and Jeff Pope with the Best Adapted Screenplay award.

Judi Dench stars in the story of Philomena Lee, mother to a boy conceived out of wedlock and given up for adoption. Nearly 50 years later, Philomena meets Martin Sixsmith (Steve Coogan), a former BBC reporter looking for his next big story. Together, they embark on a journey to locate her long lost son. As the pieces of the puzzle come together, the unlikely travel companions form a comic and heartwarming friendship. Based on the 2009 investigative book by Martin Sixsmith ‘The Lost Child of Philomena Lee’, the film adaptation has been hailed as “a triumph for Judi Dench. Brilliant. A performance of grace, nuance and cinematic heroism.” (Mary Corliss, TIME MAGAZINE)

In his review for Rolling Stone Magazine, Peter Travers salutes Judi Dench’s performance: “It’s Dench, showing how faith and hell-raising can reside in the same woman, who makes Philomena moving and memorable.” Entertainment Weekly’s Chris Nashawaty raves, “Dench and Coogan’s chemistry is undeniably great.” Deborah Young asserts in her review in The Hollywood Reporter that director “Stephen Frears returns to top form in a touching, at times funny true story.”

PHILOMENA has a running time of 98 minutes and is rated PG-13 for some strong language, thematic elements and sexual references. DVD and Blu-Ray™ special features include A Conversation with Judi Dench; The Real Philomena Lee; Q&A with Steve Coogan; and Feature Commentary with Steve Coogan and Screenwriter Jeff Pope.